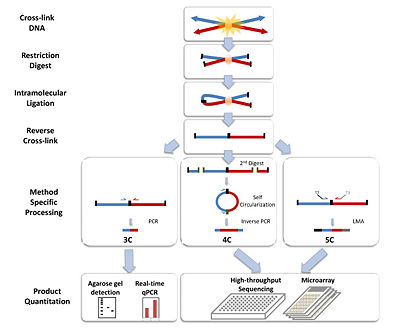 Chromosome conformation capture,[1] or 3C, is a high-throughput molecular biology technique used to analyze the organization of chromosomes in a cell's natural state. Studying the structural properties and spatial organization of chromosomes is important for the understanding and evaluation of the regulation of gene expression, DNA replication and repair, and recombination.

One example of chromosomal interactions influencing gene expression is a chromosomal region which can fold in order to bring an enhancer and associated transcription factors within close proximity of a gene, as was first shown in the beta-globin locus.[2] Chromosome conformation capture has enabled researchers to study the influences of chromosomal activity on the aforementioned cellular mechanisms. This technology has aided the genetic and epigenetic study of chromosomes both in model organisms and in humans.

Several techniques have been developed from 3C to increase the throughput of quantifying a chromosome’s interactions with other chromosomes and with proteins. All the 3C related technologies are broadly categorized in to four groups. (1) 3C and ChIP version of 3C (ChIP-loop assay), (2) 4C and ChIP version of 4C (enhanced 4C), (3) 5C and 3D assays and (4) Genome conformation capture (GCC) related (Hi-C), ChIP version of GCC as 6C. The application of analyzing DNA segments by microarray and high-throughput sequencing in the 4C, 5C and Hi-C methodologies has brought the assessment of chromosome interactions to the genome-wide scale.

Using very low concentrations of DNA favors the ligation of relevant DNA fragments with the corresponding junctions instead of the ligation of random fragments. There are two major types of ligation junctions that are over-represented. One is the junction that forms between neighboring DNA fragments due to incomplete digestion, which represents about 20-30% of all junctions. This number can be decreased by reducing the cross-linking stringency in the first step. The other type of junctions over-represented here is the junction that forms when one end of the fragment ligates with the other end of the same fragment, and contributes up to 30% of all junctions formed.[3]

Step 4 Reverse Cross-links: High temperature will result in the reversal of cross-links formed in step 1. The resulting linear DNA fragment has specific restriction ends as well as a central restriction site corresponding to the site of ligation. The pool of these fragments is collectively referred to as the 3C library.

The 4C strategy[5][6] has a significant advantage over 3C in that only the sequence of one of the site of interest needs to be known. The fragment, known as the “bait”, contains the site that associates with other chromosomal regions. The 4C procedure follows the same steps as in 3C, except additional processing is needed before quantification of the fragments of interest.

Step 5a Second Restriction Digest: After the reversal of the cross-linked DNA, the restriction fragments are subjected to another round of restriction digest, this time with a frequent cutter that will result in smaller fragments with restriction ends that differ from the central restriction site (ligation junction).

Step 5c Inverse PCR and Quantitation: Primers are designed against the outer restriction sites of the “bait” sequence, which result in the amplification of the small unknown captured fragment. Large-scale sequencing can be used to sequence the 4C library. Custom microarrays can also be made using probes designed against the adjacent upstream and downstream regions of all genomic sites of the restriction enzyme used in step 2.

The 5C technique[7] expands from 3C and allows for the parallel analysis of interactions between many selected loci.

Step 5 Ligation-mediated amplification and Quantitation: Performing multiplex ligation-mediated amplification (LMA) after the construction of the 3C library leads requires using multiplex primers that consist of universal primer sequences like T7 and T3 and the ligation junction sequences. They anneal to the 3C fragments and get ligated together with a DNA ligase. Perfect alignment with the 3C template ensures the success of the ligation. The ligated primers serve as templates of which get amplified to generate the 5C library. The use of universal primer sequences mean these 5C fragments can be analyzed on microarrays. The small size (~100 bp) of the 5C fragments is also compatible for analysis using high-throughput sequencing.

This method[8] is slightly different from the previous techniques in that the interaction formed between two chromosomal regions is mediated by a bound protein. Like in the 5C methodology, a single DNA site is often considered to interact with multiple other sites. After the cross-linking and digestion, ChIP is performed to pull down the protein bound to the site of interest. Normal 3C procedures are conducted after this step.

The ChIP-loop may be useful in identifying long-range cis-interactions and trans interaction mediated through proteins since frequent DNA collisions will not occur.

The 5C technique overcomes the junctional problems at the intramolecular ligation step and is useful for constructing complex interactions of specific loci of interest. This approach is unsuitable for conducting genome-wide complex interactions since that will require millions of 5C primers to be used.

In contrast to 3C and 5C, the 4C technique does not require the prior knowledge of both interacting chromosomal regions. Results obtained using 4C are highly reproducible with most of the interactions that are detected are between regions proximal to one another. On a single microarray, approximately a million interactions can be analyzed.

A common problem in all of these techniques is the requirement of a great number of cells, especially in the high-throughput methodologies. A single mammalian cell only provides two copies of any given restriction fragment, which can be ligated to only one other partner in 3C. Therefore any kind of quantitative analysis requires a large number of cells due to the need to determine the specification of an interaction between two regions. Experiments using the 4C technique routinely process ten million cells for analysis on a single microarray.

The 3C methodology was originally developed by Dekker and colleagues in 2002 at the University of Massachusetts and it aimed at identifying, locating and mapping physical interactions between genetic elements located throughout the human genome. This technology would give beneficial insights into the complex interplay of genetic factors that contribute to such debilitating disorders such as cancer, Duchenne muscular dystrophy (DMD), Rett syndrome and Alzheimer's disease.

3C is based on proximity ligation, which had been used previously to determine circularization frequencies of DNA in solution, and the effect of protein-mediated DNA bending on circularization. Seyfred and colleagues developed proximity ligation in nuclei: restriction enzyme digestion of unfixed nuclei and ligation in situ without diluting the chromatin, which they termed the "Nuclear Ligation Assay" (Cullen et al. Science. 1993 Jul 9;261(5118):203-6; Gothard LQ et al. Mol Endocrinol. 1996 Feb;10(2):185-95).