The Woman in the Window

The Woman in the Window

Infobox_Film
name = The Woman in the Window 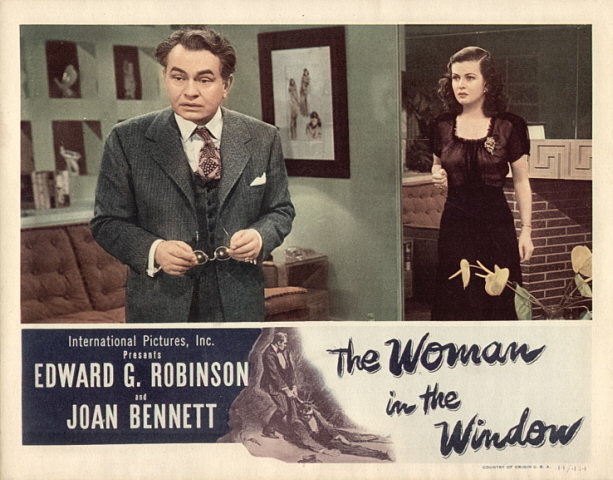 Based on ' novel "Once Off Guard", the story features two surprise twists at the end. Scriptwriter Nunnally Johnson founded International Pictures Incorporated (his own independent production company) after writing successful films such as "The Grapes of Wrath" (1940) and other films, and chose "The Woman in the Window" as its premiere project. Director Fritz Lang substituted the film's dream ending in place of the originally scripted suicide ending, to conform with the moralistic of the time.

Wanley first sees the oil portrait of Alice Reed () in a store-front window, and then meets the woman herself on the street.

After killing for her in self-defense, she then is blackmailed by Heidt (), a slick, criminal, ex-policeman who had been the dead man's body guard.

As in Lang's "", released a year later, Edward G. Robinson plays the lonely middle-aged man and Duryea and Bennett co-star as the criminal elements. "The Woman in the Window" also features as the District Attorney, a friend of Wanley.

When the film was released, the staff at "Variety" magazine lauded the film and wrote, "Nunnally Johnson whips up a strong and decidedly suspenseful murder melodrama in "Woman in the Window." Producer, who also prepared the screenplay (from the novel "Once off Guard" by J.H. Wallis) continually punches across the suspense for constant and maximum audience reaction. Added are especially fine timing in the direction by Fritz Lang and outstanding performances by Edward G. Robinson, Joan Bennett, Raymond Massey and Dan Duryea." [ [http://www.variety.com/review/VE1117796446.html?categoryid=31&cs=1&p=0 "Variety"] . Film review, 1945. Last accessed: .]