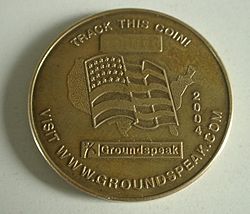 A geocoin is a metal or wooden coin minted in similar fashion to a medallion, token coin, military challenge coin or wooden nickel, for use in geocaching. The first geocins were developed by Jon Stanley (aka moun10bike) as a signature item to be placed in caches.

Many of them are made to be trackable on various websites to be able to show the movement around the world and visitors to be able to leave comments when they find the coin. 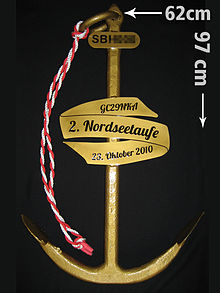 The largest Geocoin in the world

A geocoin typically has a diameter of 1.5 inches to 2 inches and a thickness between 2.5mm and 4mm. Coins with the size of 1 inch are called microcoins, because they fit into microcaches (e.g. film canister). The smallest geocoins with a diameter of 0.5 inch are called nanocoins, and have been sold since 2009. If the diameter is larger than 3 inches the geocoin is called macrocoin. It has the famous saying of "thats not a coin its an anchor".

Personal geocoins are a personal signature item that normally bears the geocacher's handle and personal design. For example it was Jon Stanley's (aka moun10bike) original manufacture of a coin that started the hobby in the geocaching game. It has a stylized mountain bike and his caching handle, and on the back the geocaching logo.

Geocoins are often minted by caching organizations and companies. Though not specifically a personal signature item they are a form of signature item for the organization that developed them. Groundspeak produces coins on a regular basis for their company and for the employees to give away at events.

In the first few years the number of coins that were a signature item for a geocaching group, or individuals far outnumbered the coins that were made to sell. However now they tend to be smaller percentage as the industry has a number of coins manufacturers that develop coins for events, holidays, or special coins. The cost to make a personal coin is fairly high.

When a cache listed at geocaching.com contains a geocoin, an icon (often unique to the type of the coin) is shown on the cache page's "Inventory" section. This icon will also appear in the inventory of any cacher holding one as well as in each cacher's historical trackable item listing. Icons will also remain in the inventory of cachers who log the 'discovery' of a geocoin's number without physically removing it from a cache. "Icon collecting" -- the act of having these icons listed in one's trackables listing—is an associated hobby. Many people bring geocoins with unique icons to geocaching events so that others may see the coins and use the tracking number to collect the icons online, and it is not uncommon for collectors to activate some or all of the coins in their collections in order to have a matching online collection of icons associated with their geocaching.com accounts.

Other websites for trackable coins include the 2005 Canadian geocoin , Utah geocoin, Oregon State coin, and sigitem.com.

It is not uncommon for activated, released geocoins to go missing, whether because a cacher is unfamiliar with the logging and tracking process or due to outright theft. Some geocoin owners will purposefully attempt to destroy the resale value of the coin by drilling and tagging it with an extra tag, marker, or other item that is intended to underscore the fact that the geocoin is meant to travel, not to be kept.[1] Another somewhat controversial anti-theft measure is to create a copy of the geocoin, releasing the copy and keeping the original.[2]