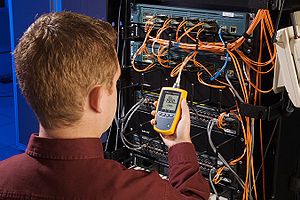 Optical power meter in use

A typical optical power meter consists of a calibrated sensor, measuring amplifier and display. The sensor primarily consists of a photodiode selected for the appropriate range of wavelengths and power levels. On the display unit, the measured optical power and set wavelength is displayed. Power meters are calibrated using a traceable calibration standard such as a NIST standard.

A traditional optical power meter responds to a broad spectrum of light, however the calibration is wavelength dependent. This is not normally an issue, since the test wavelength is usually known, however it has a couple of drawbacks. Firstly, the user must set the meter to the correct test wavelength, and secondly if there are other spurious wavelengths present, then wrong readings will result.

Sometimes optical power meters are combined with a different test function such as an Optical Light Source (OLS) or Visual Fault Locator (VFL), or may be a sub-system is a much larger instrument. When combined with a light source, the instrument is usually called an Optical Loss Test Set.

The major semiconductor sensor types are Silicon (Si), Germanium (Ge) and Indium Gallium Arsenide (InGaAs). Additionally, these may be used with attenuating elements for high optical power testing, or wavelength selective elements so they only respond to particular wavelengths. These all operate in a similar type of circuit, however in addition to their basic wavelength response characteristics, each one has some other particular characteristics:

An important part of an optical power meter sensor, is the fiber optic connector interface. Careful optical design is required to avoid significant accuracy problems when used with the wide variety of fiber types and connectors typically encountered.

Another important component, is the sensor input amplifier. This needs very careful design to avoid significant performance degradation over a wide range of conditions.

A typical OPM measures accurately under most conditions from about 0 dBm (1 milli Watt) to about -50 dBm (10 nano Watt), although the display range may be larger. Above 0 dBm is considered "high power", and specially adapted units may measure up to nearly + 30 dBm ( 1 Watt). Below -50 dBm is "low power", and specially adapted units may measure as low as -110 dBm. Irrespective of power meter specifications, testing below about -50 dBm tends to be sensitive to stray ambient light leaking into fibers or connectors. So when testing at "low power", some sort of test range / linearity verification (easily done with attenuators) is advisable. At low power levels, optical signal measurements tend to become noisy, so meters may become very slow due to use of a significant amount of signal averaging.

Optical Power Meter calibration and accuracy is a contentious issue. The accuracy of most primary reference standards (e.g. Weight, Time, Length, Volt etc.) is known to a high accuracy, typically of the order of 1 part in a billion. However the optical power standards maintained by NIST, are only defined to about one part in a thousand. By the time this accuracy has been further degraded through successive links, instrument calibration accuracy is usually only a few %. The most accurate field optical power meters claim 1% calibration accuracy. Comparatively, this is orders of magnitude less accurate than a typical electrical voltmeter.

Therefore, achieving a good level of practical instrument accuracy and linearity is something that requires considerable design skill, and care in manufacturing.

A class of laboratory power meters has an extended sensitivity, of the order of -110 dBm. This is achieved by using a very small detector and lens combination, and also a mechanical light chopper at typically 270 Hz, so the meter actually measures AC light. This eliminates unavoidable dc electrical drift effects. If the light chopping is synchronized with an appropriate synchronous (or "lock-in") amplifier, further sensitivity gains are achieved. In practice, such instruments usually achieve lower absolute accuracy due to the small detector diode, and for the same reason, may only be accurate when coupled with singlemode fiber. Occasionally such an instrument may have a cooled detector, though with the modern abandonment of Germanium sensors, and the introduction of InGaAs sensors, this is now increasingly uncommon.

Optical power meters usually display time averaged power. So for pulse measurements, the signal duty cycle must be known to calculate the peak power value. However, the instantaneous peak power must be less than the maximum meter reading, or the detector may saturate, resulting in a wrong average readings. Also, at low pulse repetition rates, some meters with data or tone detection may produce improper or no readings. A class of "high power" meters has some type of optical attenuating element in front of the detector, typically allowing about a 20 dB increase in maximum power reading. Above this level, an entirely different class of "laser power meter" instrument is used, usually based on thermal detection.

An increasingly common special-purpose OPM, commonly called a "PON Power Meter" is designed to hook into a live PON (Passive Optical Network) circuit, and simultaneously test the optical power in different directions and wavelengths. This unit is essentially a triple power meter, with a collection of wavelength filters and optical couplers. Proper calibration is complicated by the varying duty cycle of the measured optical signals. It may have a simple pass/ fail display, to facilitate easy use by operators with little expertise.