The Singapore Scout Association (SSA) is one of the oldest youth movements in Singapore. Scouting encourages the holistic physical, mental, spiritual, emotional and social development of youth with a strong emphasis on duty to God, duty to country, help other people as stated in the Scout Promise and Scout Law.

Scouting was first introduced in Singapore in 1908 but was officially founded on 2 July 1910. A young Scoutmaster named Frank Cooper Sands arrived from Nottingham in September 1910 and spent the next 40 years helping to create the Singapore Scout Association. He is often called the "Father of Malayan Scouting". Starting with a small troop of 30 boys, the movement has grown immensely over the last 90 years, surviving two world wars and producing countless leaders in every sphere of human endeavour. Scouting for local boys only started in 1919 by Captain N.M. Hashim and A.Z. Alsagoff. From 1922 schools in Singapore adopted the Scout Programme as an extra-curricular activity resulting in the formation of school-sponsored troops registered as 2nd Raffles Institution, 3rd Anglo-Chinese School and 4th St Joseph Institution[1]. The 04 St Joseph's Pelandok Scout Group, formed in the 1911, became the oldest surviving Scout troop after the First Singapore Scout Troop disbanded.[citation needed]

Today, there are 10,292 Scouts[2] in Singapore serving in four mainstream Scout sections. Each section caters to the needs of Scouts in a specific age range through its different program focus. The Cub Scout section comprises youths between ages 7 and 12 (primary school) while the Scout section is made up of youths from 12 to 16 (secondary school). In addition, there are the Venture Scout and Rover Scout which accept youths between the ages of 15 and 18 and young adults from 17 to 25 respectively. Besides the mainstream Scout sections, there is also the Sea Scout section, which comprises Sea Scouts, Sea Venture Scouts and Sea Rover Scouts, and the Extension Scouts which is open to all physically or mentally disadvantaged youths who enjoy Scouting. Previously, there was also the Air Scout section which is now abolished.

Scouting in Singapore is not only available to schools but also to the general community. The Scout units based in community are usually open units. They often work hand in hand with their respective RCs with community projects while using these RCs as their Scout's "base". There are also several foreign Scout groups, mainly the international schools, in Singapore that actively participate in the Singapore National & Area Scouting events. 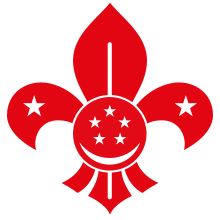 The Scout Association has developed and has kept pace with Scouting program to meet the needs and aspirations of the people. The association continues to identify itself actively with the process of nation building by organising relevant activities and is not connected with any political party.

The President of the Republic of Singapore is the Chief Scout. The Chief Scout holds the highest authority in the SSA and grants warrants and awards to uniformed adult leaders and commissioners who are recommended by the Association Headquarters. The Chief Scout also awards deserving and outstanding youth members who have attained the Standards of the Highest Award — the President's Scout Award.

The Association Headquarters is led by the Scout Council, which comprises both the uniformed and lay official who will assist the Chief Scout in his functions. The Scout Council is responsible for finding funds to support the association's activities and provides strategic direction and financial oversight on the Association while the Commissioner's Council formulate operational policies and directives in the respective fields and departments. The Area Council and the Districts implement the various National policies and directives to the grassroot units. Full-time professional staff provide day-to-day management of the Association Headquarters and provide support services to Commissioner's Council and Scout Council.

To develop young people for a purposeful and responsible adulthood, always prepared to serve God, country and humanity.

I promise that I will do my best
to do my duty to God and
to the Republic of Singapore,
to help other people and
to keep the Scout Law.

A Scout is to be trusted.

Trusted here means that a Scout can be relied upon to carry out his duties faithfully. In his personal bearing and conduct, he is able to win the trust and confidence of other people. There is no need to check to see if such a boy has done the job he said he would do, or telling the truth. People can rely on him not to let them down.

A Scout is loyal.

Being loyal to people means being on their side and showing that you are when the chance offers. It is easy to be loyal when things are going well, but the real test of one's loyalty comes when trouble comes or hard work is involved.

A Scout shows loyalty to his home, to his friends, to his Scout Unit, to the Singapore Scout Association and to his own Nation. He will do anything to uphold the good name of Scouting. He will show respect to the Nation Flag and the National Anthem (viz. Majulah Singapura in Singapore) because he is loyal to his Nation.

Making friends is very much a part of Scout training. Enlarge your circle of friends; this includes making friends with local Scouts as well as Scouts from other countries. You want your friendship to last; having made friends, you are to do your best to be friendly, to share what you have with them. In this way, they learn to like you, to help you no matter what race they belong to. Learn to live with them and live happily together.

A Scout is disciplined and considerate.

A disciplined Scout is a boy who understands what is orderliness and what is unruliness. He likes discipline because things can be done quickly where there is order. He learns to accept praise without getting swollen-headed and is ready to be corrected if he has done wrong. In the same way, he acknowledges success with humility and accepts defeat with equal grace. To be considerate is to be thoughtful of others. You are not going to do anything that will hurt others whether in thought, deeds or words. Also, understand that consideration for others paves the way for happy and harmonious living.

A Scout has courage in all difficulties.

A Scout who has courage is ready to face any difficulty what comes along. He is not going to give up easily but tries very hard to overcome his difficulties. The reason is that without courage, without being strong in spirit, a person has less chance of survival or success than one who is brave and refuses to give up until he succeeds. Difficulties can be solved if you have courage.

Every Scout should learn to strive and to achieve and this is only possible if he has the courage to do the right thing at the right time.