Kōkyū (後宮?) is the section of the Japanese Imperial Palace called the "Dairi" (内裏) where Imperial Family and court ladies lived.[1]

Many cultured women gathered as wives of Emperors, court ladies and maids for these women, and court officials often visited these women for influence, literary charm, or romances. Significant contributions to the literature of Japan were created in the Kōkyū during this period—works such as The Tale of Genji by Murasaki Shikibu, The Pillow Book by Sei Shōnagon, and many anthologies of waka poems. 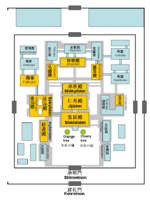 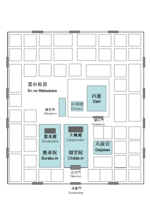 The names of the several gates in the walls surrounding the Imperial grounds refer not only to the specific wall-openings themselves; these names were also used to refer indirectly to a nearby residence of an empress whose husband had abdicated, or as an indirect way of referring to the Empress Dowager herself, e.g., Empress Dowager Kenrei (建礼門院,, Kenrei-mon-In?), whose official home, after the abdication and death of Emperor Takakura, was located near the Kenrei Gate.

In this same way, the term kōkyū has multiple meanings, referring to the group of buildings situated near the sovereign's personal apartments where the consorts resided, and also describing the staff of female palace officials assigned to the service of those consorts. More broadly, the term kōkyū could be used in identifying the array of consorts below the empress.[2]

The structure of the royal household and ranks for court ladies were defined in Taihō Code and Yōrō Code. In these Codes, there were originally to have been twelve sections, and the various ranks for ladies' of the Imperial household within the Kōkyū were defined.

Fine distinctions were collapsed or expanded in a gradual re-organization which became formalized during the Heian period. For example, in 806, Emperor Heizei elevated the former Fujiwara no Tarashiko (藤原帯子) (?-794), also known as Taishi, by giving her the Imperial title of Kōgō or empress. This occurred 12 years after her death, and it became the first time this posthumously elevated rank was bestowed.[3]

Many of the court ranks which were not defined in either the Taihō or Yōrō Codes have been in continuous use in the centuries following the early Heian period.

The following 11 sections were collapsed in the early Heian period.

Ministry of the Imperial Household

The Asuka-, Nara- and Heian-period Imperial court hierarchy encompassed a Ministry of the Imperial Household (宮内省,, Kunai-shō?).[5] The origin of the current Imperial Household Agency can be traced back to the provisions on the government structure which were put into effect during the reign of Emperor Monmu.[6] There were specific Daijō-kan officials within this ministry structure whose attention was focused primarily on the women of the Imperial household. These were: