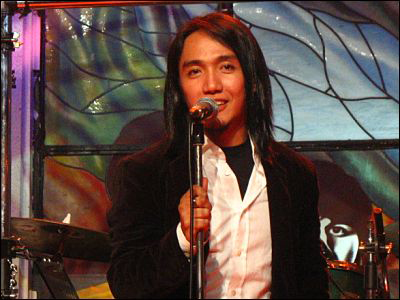 Pineda was born in , in the . His mother passed away when he was thirteen.

In 1982, when Pineda was 15 years old, he became the lead singer of the Filipino musical group called Ijos Band (later renamed "Yjoz"). In 1986, some members of Yjoz formed a group called Amo. Amo entered and won the Rock Wars contest in the Philippines.

In 1988, Amo entered and won the Philippines leg of the Yamaha World Band Explosion. They went on to the finals in Hong Kong but due to a technicality, they did not win. (The rules stated the winning song had to be an original composition. However, they also stated that the song entry in the finals had to be the same song with which the band won their country's leg of the competition. Amo's winning song in the Philippines was Queen's "Bohemian Rhapsody", obviously not an original.) After the contest, the band continued as Amo, performing live. They opened for Robert Palmer in Manila in 1989.

Amo played in clubs in City, and , which are located in Luzon, the biggest island in the Philippines. Amo was very popular in the renowned Chinese-owned California Jams club in Olongapo City, which was frequented by United States military personnel.

In 1990, Pineda and other members of Amo formed another band called Intensity Five and once again entered the Yamaha World Band Explosion. Pineda won the Best Vocalist award and the band came in as first runner up.

Later in 1990, five of Amo's original members split from the band leader, Ulysis Ablang (Uly) and formed another band behind Pineda, "New Age". This occurred prior to the release of Amo's one-and-only album released in 1990 titled "Ang Tunay na Amo" ("The Real Master") on BMG records which spawned one popular radio hit called "Running Away". (The song was popularized again in 2006 by another Filipino artist Erik Santos, who won an American Idol type Filipino TV show, "Star In A Million".) The remaining members of Amo went on to become "The Boss Band", while Pineda's band, New Age, played regularly at Fire and Rain in .

In 1991, during one of those performances, a talent agent spotted Pineda and New Age and asked them to move to to perform at a very popular entertainment restaurant called Grammy's. With New Age, Pineda performed six nights a week, Tuesday through Sunday, for several years thereafter.

After a long-term serious relationship failed in 1994, Pineda suffered health problems, which almost destroyed his voice. He returned to the Philippines. After six months of recuperation, he was able to sing again. ["ClickTheCity.com" (January 17, 2008). [http://guides.clickthecity.com/music/?p=2661 "Zoo's Arnel Pineda: Journey's New Voice"] . Retrieved on February 5, 2008.] He returned to Hong Kong and resumed singing with his band.

In 1998, the owner of Igor's, the premiere theme restaurant/nightclub in Hong Kong, asked New Age to perform there. Dressed in skeleton outfits, they called themselves "The Rolling Bones".

In 1999, Pineda caught the attention of record label and flew back to the Philippines on his days off to record a solo album, the self-titled "Arnel Pineda". Most of the album’s ten original songs were slow ballads, with only two upbeat numbers, one of which carries a Latin style. One of the songs, “Iiyak Ka Rin” (You Will Cry Too) became a karaoke favorite in Asia, while another song "Sayang" (Too Bad) became a radio favorite. Pineda wrote and arranged several songs. Pineda continued to perform with New Age while making his album and for several years thereafter.

In 2001, Pineda sang one song with Filipino band, ’s album "The Way We Do". The song is called “Looking Glass”.

In 2004, three members of the New Age band reformed with a female singer sharing lead vocals with Pineda and called themselves “Most W@nted”. This band played 3-4 hour sets Monday through Saturday at The Cavern Club in Hong Kong. [Julve, Smiley D. (January 2005), [http://www.sunweb.com.hk/Story.asp?hdnStoryCode=937&Menu=4&hdnSectioncode=FEATURES "What it takes to be Most W@nted"] , "The Sun Internet Edition". Retrieved on February 5, 2008.] On their only day off, Sundays, the band often performed at Filipino community events.

In 2005, Arnel recorded the theme song of the short-lived Filipino radio show "Dayo". A band named The Visitors was briefly formed for promotion purposes of the "Dayo" soundtrack consisting of three members from Ijos/Yjoz, Amo, New Age and Most W@nted.

In 2006, encouraged by well-respected Filipino talent manager and TV director, Bert de Leon, Pineda moved back to the Philippines with Monet Cajipe, the guitarist who had been in all of Pineda’s previous bands. They formed The Zoo with Emil Bondoc on bass, Edgar Mendoza on keyboards, and Makoy Alcantara on drums. They signed on with de Leon's company, Sundance Entertainment Corporation. The Zoo performed several nights a week at clubs in Manila and Olongapo during 2006 and 2007. Shows regularly spanned 3-5 hours. The Zoo’s first album "Zoology" was released by MCA Universal in September 2007 featuring 12 original tracks and one cover song ("Pain in My Heart," originally recorded a decade earlier by Second Wind), five of which were penned by Pineda, and another was co-written by Pineda and Mark Valliente.

Videos of The Zoo performing cover songs by Journey, Survivor, Aerosmith, Led Zeppelin, Air Supply, The Eagles, Kenny Loggins and other popular acts from the 70s, 80s and 90s, began appearing on YouTube.com in February 2007. On , , [Noel Gomez's statement in reply to a comment on his video of [http://www.youtube.com/watch?v=6HjcCzgCCX0 The Zoo covering Journey's "Faithfully"] on YouTube. Retrieved on February 5, 2008.] of Journey contacted Noel Gomez, a longtime fan and friend of Pineda who uploaded many of these videos, to ask for Pineda's contact information. Schon sent an e-mail to Pineda inviting the latter to audition for Journey. Pineda initially dismissed the e-mail as a hoax, but after being persuaded by Gomez, he finally replied to Schon's e-mail. Ten minutes later, Pineda received a phone call from Schon.

Pineda debuted as the lead singer of Journey on , 2008 at the held at the Quinta Vergara Amphitheater in , .

Chilean media acclaimed Pineda's performance (translated to English): "The new vocalist fit very well with the band, his vocal aptitudes shining through, which are very similar to the legendary musician of the band, Steve Perry."

Journey returned to the US for a private Remax Convention event at the MGM Grand in Las Vegas on March 6, 2008, then performed at Las Vegas' Planet Hollywood on March 8, 2008 (this concert was recorded and used, in part, for the Revelation DVD).

Journey's first album with Pineda, "Revelation" debuted at No. 5 in the Billboard Top 200 album charts in the week following its release (released June 3, 2008), and has remained in the Top 20 for 6 weeks. It is expected to be certified gold by RIAA soon with more than 336,000 units sold (as a double album) [ [http://ragmagazine.com/RAG%20Magazine%20-%20July%202008.pdf "Rag Magazine July 2008: Interview with Deen Castronovo"] Retrieved on July 14, 2008. ] . The US version of the album (distributed exclusively through Wal-Mart) consists of 11 new songs, and 11 re-recorded classics, plus a live in-concert DVD filmed during the March 8, 2008 concert in Las Vegas. The European version contains 11 new songs, 11 re-recorded classics, plus one new bonus track, but does not include the DVD. It is distributed through Frontiers Records.

All of the music on "Revelation" was produced by (who previously worked with Journey on their Platinum-certified "Trial by Fire" album). ["JourneyMusic.com" (March 11, 2008). [http://www.journeymusic.com/home.html "Journey set to release 'Revelation' June 3 exclusively at Wal-Mart"] Retrieved on March 12, 2008.]

Jonathan Cain described the album in an interview: "We recorded our greatest hits with our brand new singer from the Philippines, Arnel Pineda, and it's unbelievable when you listen to it. We paid a lot of attention to the details because everybody loves those hits and we weren't about to step all over it. We've got that and a brand new CD as well, and then there's a bonus DVD of what the band looks like now, about an hour of songs... It's a 3-disc package... We're excited because we think Arnel is the future for our franchise... We knew that if we were ever gonna move on, we had to get somebody that was really gonna be our future and sound like Journey is supposed to sound...I think Journey fans are in for a real treat."

In an interview soon after Pineda joined the band, Neal Schon said, "We feel reborn. I think there’s a lot of chemistry between the five of us. At first we were going to go into the studio and just write 4 songs, but now it’s escalated to a lot of great new and diverse material. The stuff sounds tremendous. Everyone’s so stoked about it. We feel very fortunate to have found Arnel." ["JourneyMusic.com" (December 5, 2007). [http://www.journeymusic.com/home.html "Journey welcomes Arnel Pineda with "Open Arms" to their family as the band's new lead singer"] Retrieved on December 6, 2007.]

In Arnel's online diary, Shirley described the recording sessions as "wonderful, successful, stupidly creative" and said that "Sometimes you just know when there's history in the making." [Shirley, Kevin (November 14, 2007), [http://www.cavemanproductions.com/nov2k7.htm "Wednesday November 14th 2007 Malibu, CA"] , "Caveman's Diary". Retrieved on February 5, 2008.] In a statement on December 5, 2007, Shirley said "I was stunned at Arnel, who is a monster vocalist. He is the real deal. Just phenomenal." ["MelodicRock.com" (December 5, 2007). [http://www.melodicrock.com/news2007.html "Wednesday, December 05, 2007"] , Retrieved on February 5, 2008.] When speaking about the upcoming album in a later entry in his diary, he said: "Just got back from Vegas last night, after mixing seven new Journey songs. They are outstanding... For the record, I think Arnel is 'the business!' - the guy can really sing! He handles the ballads with SO much heart, and belts the rockers as hard, and melodically, as anyone I have heard. The songs are sensational - wonderfully crafted and deep, and so focused, you may wonder where they all came from. And I'm being serious...." [Shirley, Kevin (December 7, 2007), [http://www.cavemanproductions.com/dec2k7.htm "Friday December 7th 2007 Malibu, CA"] , "Caveman's Diary". Retrieved on February 5, 2008.]

Journey's 2008 tour accompanying the release of "Revelation" began on June 8, 2008, in Spain, followed by four dates in Germany, and one date in the Netherlands. Journey toured the United Kingdom from June 17 through June 28, 2008. The US tour (with Heart and Cheap Trick) began on July 9, 2008, in Denver, CO, and continues through October 4, 2008, in Albuquerque, NM. Many dates are already sold out, well in advance.

Pineda performed as part of the Journey concert at Mandalay Bay and Casino in Las Vegas on July 18, [ [http://newsok.com/review-classic-rockers-heat-up-the-zoo/article/3274212/?tm=1216902168 newsok.com, Review: Classic rockers heat up the Zoo] ] [ [http://www.abs-cbnnews.com/storypage.aspx?StoryId=126265 abs-cbnnews.com, Journey with Filipino lead singer Arnel Pineda, takes North America by storm] ] and on at in , and Zoo Amphitheatre. [ [http://www.omaha.com/index.php?u_page=2620&u_sid=10388319 omaha.com/index, Review: Journey's new singer has the chops for job] ]

Pineda celebrated his 41st birthday in Toronto, Canada for a concert on September 5, 2008 at the Molson Amp.

In the closing months of 2008, Journey plans to tour Japan, Australia, and the Philippines. Information about concert dates are available at the [http://www.journeymusic.com/home.html Journey Homepage] .

Arnel has three sons: Matthew (19 years), Angelo (11 years), and Cherub (2 years). When he's not on tour with Journey, he lives in Quezon City, a suburb of Manila, with his girlfriend, Cherry, and their son, Cherub.