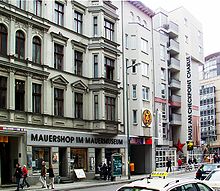 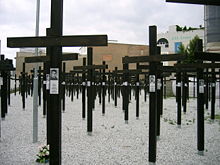 The Checkpoint Charlie Museum (German: Haus am Checkpoint Charlie or Mauermuseum) is a museum in Berlin. It is named after the famous crossing point on the Berlin Wall, and was created to document the so-called "best border security system in the world" (in the words of East German general Heinz Hoffmann). On display are the photos and related documents of successful escape attempts from East Germany, together with the escape apparatus: hot-air balloons, getaway cars, chairlifts, and a mini-U-Boat.

It began as an exhibition by the historian Rainer Hildebrandt on 19 October 1962, just outside the Berlin Wall, "in an apartment with only two and a half rooms in Bernauer Straße. The street was divided along its whole length; the buildings in the east had been vacated and their windows were bricked up."[1] The Haus am Checkpoint Charlie opened in its present location in 1963.

The museum is operated by the Arbeitsgemeinschaft 13. August ("13 August Consortium" – the date on which construction of the Berlin Wall began), and the director is Alexandra Hildebrandt, widow of Rainer.

It is one of the most frequently visited museums in Berlin, with 850,000 visitors in 2007.[2] Through its presentation of the many ways in which people tried to escape East Germany, it aims to bring that period of history to life and ensure that it is not forgotten.

In 2004, Alexandra Hildebrandt created the Freedom Memorial to the victims of the border forces, on the site of the former Checkpoint Charlie. The following year, however, the crosses which made up the memorial were removed, following a court order enacted by the owner of the site.[3]

In 2008, the museum gave the total number of people killed up until 1989 on the Berlin Wall and the East-West German border as 1,303. However, one source claims that this total includes victims trying to escape via the Baltic Sea, Germans killed on the country's exterior borders, the deaths of East German soldiers and Soviet deserters, suicides of family members of the border troops, and people who successfully escaped from the East but were subsequently captured and killed by the Stasi or the KGB.[4]

We can also call ourselves the first museum of international nonviolent protest. Our exhibits include: The Charta 77 typewriter, the hectograph of the illegal periodical “Umweltblätter” (“Environmental Pages”), Mahatma Gandhi’s diary and sandals and from Elena Bonner the death mask of her partner Andrei Sakharov.
—Rainer Hildebrandt, "Origins - Development - Future", from mauermuseum.de[1]