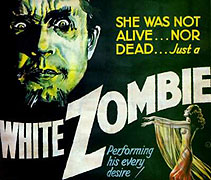 financed most of the production of the film through his Amusement Securities Corporation, using the film rights as collateral. When the Halperins were unable to repay the loan in a timely manner, Krellberg took over the rights and, after its initial run was finished, periodically reissued the film through minor distributors, the last time being in 1972.

The script by features a young couple in , Neil Parker () and Madeleine Short (), who have been invited by a casual acquaintance, Charles Beaumont (), to come to his plantation to be married. Beaumont, however, is actually in love with Madeline and hopes to persuade her to become his wife instead. Rebuffed, he approaches local white master "Murder" Legendre () to temporarily turn her into a zombie, have her declared dead, send Neil back to the States in mourning, then revive her so that he can woo her anew. Legendre, however, has his own plans for the young lady, and for Beaumont. She is ultimately rescued from living death by her faithful Beaumont and a missionary named Dr. Bruner (Joseph Cawthorn).

Bela Lugosi's character is never identified as "Murder Legendre" in the film. He is referred to by name once, and then only as "Murder".

"White Zombie" is among the most-renowned s of the early sound era. Its legacy includes a namesake rock band, an extensive published critical analysis by , many and versions owing to its public-domain status, and considerable debate among film historians regarding its degree of virtue.

*It is the first film dealing with s, a popular horror film subject of the last forty years.
*It was independently-produced and not a product of a major studio like Universal, which made most of the best-known early horror films.
*The director quit midway in filming and Lugosi got the chance to direct some scenes of the film. This according to his son as he commented in the documentary 100 Years of Horror. Lugosi had wished he could have done much more.
*A 1990’s laser-disc restoration by (in turn released on DVD) followed many years of poor-quality, choppy transfers circulated on television and videotape, a result of the film’s public-domain status; any company could release the film commercially without regard to quality, and they did.
*Its use of sophisticated camera, lighting, and sound techniques was pioneering for the genre.
*It features a full musical score, albeit composed of secondary source material; contemporary horrors "Dracula" and "Frankenstein" did not.
*Its elaborate sets, rented from Universal, and striking painted background images belie its independent status and help make it more comparable to a studio film than subsequent independent horror films would be.
*It stars in one of his top performances, in a unique and visually-striking makeup.
*Jack Pierce, Universal's resident makeup genius who created the landmark face designs for the Frankenstein Monster, the Mummy, and later the Wolf Man, was the makeup artist for the film.
*It marks the first of many independent-film choices for Lugosi following his success in Universal's "Dracula," a tendency that is generally cited for diminishing his status in the industry and is a popular Lugosi-discussion topic.
*The quality of its performances is the subject of much debate, with some horror-film historians blaming the romantic leads in part for their overall ambivalence toward the film, but others crediting the disparate acting styles as contributing to the film's strange, dream-like quality.
*Unlike most other popular horror films, "White Zombie"'s cast is made up almost entirely of actors who today are not popularly-known for other performances; this feature helps to spotlight Lugosi, the most notable exception, and add to the film's other-worldliness.
*It contains a multitude of singularly-memorable moments, including:
**A frightful scene showing zombies working in the sugar mill owned by Lugosi's character.
**The foot-to-head introductory pan of the zombie played by Frederick Peters, one of the genre’s scariest-looking characters.
**The famous "flub" of horror-favorite holding his nose as he’s being thrown to a watery death.
**Actor-musician ’s description of zombies, a rare instance in early films, especially horror films, in which an was provided an opportunity to deliver lines in a non-stereotypical manner.
**The early close-up of Lugosi’s eyes that travels across a wide shot and settles on the head of the actor.