Typhoid Mary (Mary Walker), also known as Typhoid, Walker, Bloody Mary and Mutant Zero, is a fictional character, a supervillain and enemy of Daredevil and Deadpool in the Marvel Comics Universe. She first appeared in Daredevil #254, and was created by Ann Nocenti and John Romita, Jr.. Her name comes from early 20th century Irish-American cook and typhoid fever carrier "Typhoid Mary" Mallon.

In the pages of Avengers: The Initiative a mysterious character named Mutant Zero was shown. Writer Dan Slott stated that she was secretly a well-known character in disguise.[1]

She's a mutant chick who's been cover-worthy many times... When that mask comes off, there will be a 'whoa' among those reading it. People who don't even follow comics regularly will know who it is.

She first appeared in Avengers: The Initiative #4 as a member of Henry Peter Gyrich's black ops team but it wasn't until issue #20 that she was finally revealed to be Typhoid Mary.

Typhoid Mary is an enemy and former lover of Daredevil with low level psionic powers, including telekinesis. She has been a professional criminal employed by organized crime syndicates as an assassin in the past. She is also truly and gravely mentally ill.

Her condition was accidentally caused by a pre-Daredevil Matt Murdock. He had tracked a villain down to the brothel where Mary worked. He attacked the man, but to his surprise, the girls working there came at him. Panicking, he lashed out, knocking Mary out the window. It was at this moment that Mary somehow became Typhoid Mary, vowing no man would ever hurt her again.[2] In later appearances, however, she would imply that she was a victim of child abuse.[volume & issue needed] [3]

Suffering from dissociative identity disorder, Mary Walker has three other abnormal personalities in addition to her seemingly healthy one. Her "Mary" personality is a timid, quiet, pacifist; her "Typhoid" personality is adventurous, lustful, and violent; and her "Bloody Mary" persona is brutal, sadistic, and misandric. Mary once claimed that there was a fourth personality, who is 'lost,' but it has not since been mentioned. Aside from highly developed martial arts skills, Walker also possesses telekinetic powers and, more dangerously, pyrokinesis, the ability to set people or objects in her immediate vicinity aflame.

In her first appearance, she met Matt Murdock, and was hired as an assassin by the Kingpin.[4] She then first battled Daredevil, while beginning a romance with Matt Murdock.[5] She temporarily reverted to her "Mary" personality,[6] but then reverted back to her "Typhoid" personality, and began a romance with the Kingpin.[7] She hired Bullet, Bushwacker, Ammo, and the Wild Boys to attack Daredevil,[8] and then personally led these criminals against him.[9]

A favorite pawn of the Kingpin, Typhoid frequently battled and had a love-hate relationship with Daredevil before disappearing. Through hypnosis, the abnormal and psychotic personalities were suppressed from Walker's consciousness, and she began to lead a normal life, becoming an actress on a soap opera.[volume & issue needed] She was sent by Doctor Doom to learn the secrets of Kymellian technology from Power Pack during the Acts of Vengeance.[10] She was subsequently in the Kingpin's employ once again, and met Bullseye.[11] She helped thwart an attempt on the Kingpin's life by Crossbones.[12] At one point, as she struggled to keep her multiple personalities under control, she befriended Mary Jane Watson and battled Spider-Man when Bloody Mary resurfaced and she began killing men who committed domestic abuse. With the web-slinger's help, Mary regained control and voluntarily turned herself in to the police for treatment.[volume & issue needed]

At one point, Mary was confined to a mental institution where each personality hired a mercenary. Mary hired Deadpool to kill her, Typhoid hired him to break her out, and Bloody Mary hired The Vamp/Animus to break her out to resume a killing spree. Deadpool defeated the Vamp/Animus but refused to kill Mary, allowing the Typhoid personality to become dominant.[13] Typhoid and Deadpool had a few adventures together, including traveling to New York City to confront Daredevil for accidentally kicking her out of the brothel some years ago (Typhoid regained the memories of this incident when Deadpool pushed her out of a window), before Deadpool attempted to reform Typhoid. This did not go well and the two eventually separated.[volume & issue needed]

However, following the Kingpin's fall from power and subsequent near-death coma, he recovered and started rising back to power, taking out his enemies.[volume & issue needed] To distract Daredevil while he retook his criminal empire, the Kingpin paid a visit to Walker at her show and, with a blunt slap, released the abnormal personalities. Murdock's bodyguards Luke Cage and Jessica Jones managed to take her down after she confronted Daredevil in his secret identity and set him on fire. Mary was imprisoned on The Raft, a maximum security prison for super-powered criminals.[14]

Electro later led an attack on the Raft, breaking out the prisoners. While the Avengers arrived and managed to stop some of the prisoners, Mary managed to escape and was briefly mentioned[15] as once more working for the Kingpin. 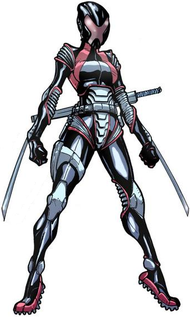 At some point after the events of the superhuman Civil War, Mary is found by Henry Peter Gyrich and recruited into the Initiative program. It is currently unknown whether she suffered some sort of psychotic episode which left her too unstable to be left to her own devices or whether she sought out treatment and joined of her own free will. Gyrich reveals that 'Mutant Zero' is a mutant that not only remained empowered following M-Day, but one that is not included in the official record of the remaining mutants. Technically not existing in any official capacity (according to Gyrich), Mary's true identity is made classified and she is given the codename of "Mutant Zero." According to Dr. Leonard Samson, Mutant Zero is still mentally unstable and that referencing any of her other identities could lead to a period of instability. Mutant Zero is inducted into the Initiative's black ops team, the Shadow Initiative, but due to her mental instability she can only be "activated" once per mission or risk her becoming mentally unstable.[16]

When Taskmaster is appointed as field leader of the Shadow Initiative, he senses something familiar about Mutant Zero's body language (thanks to his superhuman ability), and initiates an impromptu sparring match with her to satisfy his curiosity. After witnessing her fighting style and provoking her into using her pyrokinesis, Taskmaster shatters her helmet's faceplate and reveals her as Typhoid Mary.[17]

As the Shadow Initiative prepares to capture Hardball in Madripoor, Mary reveals that the reason why she joined the Initiative is because she couldn't merge or block out her four personalities, so she offered to join in exchange for a pardon and to help integrate her fractured mind, which is still a work in progress.[18] During the Shadow Initiative's fight against HYDRA, Mary loses control of her personalities, having spent too much time from the Zero Room, and flees into the wilds of Madripoor.[19]

Mary answers Daredevil's call for superheroes to join him and The Hand in providing martial law for an ever increasing area of New York City. She claims that her time in the Initiative was successful in integrating her fractured mind, but Daredevil does not believe her.[volume & issue needed] Following the war, Kingpin - using secret code words to activate her fourth personality - reveals that she was an inside agent who was ignorant of her 'true' goal all along.[20]

Typhoid Mary is a mutant and possesses a number of limited psionic powers. She can use telekinesis to levitate small objects over short distances (such as weapons of under 10 pounds; knives, razors, etc., which her "Bloody Mary" persona often gathered and assembled into improvised battle-armor). She is a powerful pyrokinetic, meaning she can cause spontaneous combustion within line of sight to set objects in her immediate vicinity aflame. She can implant mental suggestions in the minds of others. She can use her psionic hypnosis ability to induce sleep in weak-minded individuals and most animals; certain individuals are mentally resistant to her hypnotic powers.

However, she has three separate personalities as a result of her mental illness. The timid, pacifist "Mary" personality has no psionic abilities. The "Typhoid" and "Bloody Mary" personalities have the full range of these psionic powers and they are strongest in "Bloody Mary". Her original "Mary Walker" personality is supposed to be a balanced amalgam of all of these, but is seldom dominant. Because of the different heart rates and voice patterns of her different personas, not to mention the different ways of dress, even Daredevil's super-senses were long unable to tell the different personas all belonged to the same woman, and Typhoid Mary took advantage of this situation to hide from Daredevil/Matt Murdock even within earshot.

As Mutant Zero, Mary appears to possess the same psionic powers utilized by both Typhoid and Bloody Mary. It is unknown whether the powers she possesses as Mutant Zero are equal to or stronger than those of the "Bloody Mary" personality. Recent battles suggest they are more powerful, but take their toll on Mary when used as a result of this strength. Mutant Zero is also equipped with a suit of full body armor that appears to enhance her physical strength and an arsenal of weapons, including guns and various blades.

Typhoid Mary is in excellent physical condition. She has peak human reflexes and agility, and is highly athletic. She is also trained in the martial arts, particularly Judo and Zen-Sword. She has exceptional skill in wielding and throwing bladed weapons, and is usually armed with a variety of machetes and smaller knives.

Typhoid Mary appears as an assassin of Wilson Fisk.[21]

In the Mutant X reality, Typhoid Mary is a member of the Avengers.[22]