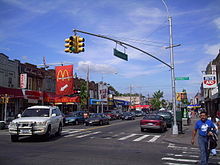 The hill referred to as Richmond Hill is a moraine created by debris and rocks collected while glaciers advanced down North America.

Richmond Hill is rich in history. The Battle of Long Island, one of the bloodiest battles of the Revolutionary War, was fought in 1776 along the ridge now in Forest Park, near what is now the golf course clubhouse. Protected by its thickly wooded area, American riflemen used guerrilla warfare tactics to attack and defeat the Hessians.

Richmond Hill's name was inspired either by a suburban town near London, England, or because of Edward Richmond, a landscape architect in the mid-19th century who designed much of the neighborhood. In 1868, a successful banker named Albon P. Man bought the Lefferts and Welling farms, and hired Richmond to lay out the community. Over the next decade streets, schools, a church, and a railroad were built, thus making the area one of the earliest residential communities on Long Island. The area is well known for its large-frame single family houses, many of which have been preserved since the turn of the 20th century. Many of the Queen Anne Victorian homes of old Richmond Hill still stand in the area today. The area first became developed in the later decades of the 19th Century with the 1868 opening of the Richmond Hill railroad station at the intersection of Hillside Avenue and Babbage Street, on the Montauk railroad line between Long Island City and eastern Long Island. 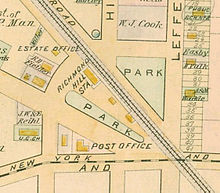 Development around railroad station, after two decades of operation, on an 1891 map

The area received further development in 1918, when the BMT Jamaica Avenue elevated train line (today the J/Z lines of the New York City Subway) was extended in the neighborhood. It is also the southern port for the A train, which heads at the busy intersection of Liberty Ave & Lefferts Blvd.

The Triangle Hofbrau[3] was a restaurant which was frequented by such stars as Mae West in the 1920s and 1930s. It sat on the triangular piece of land bordered by Hillside Avenue, Jamaica Avenue and Myrtle Avenue.

Near the northwest corner of Hillside Avenue and Myrtle Avenue sat an old time ice cream parlor, Jahn's. It closed in late 2007. Not far away is Lefferts Boulevard which, with Liberty Avenue, define the central core of Richmond Hill. Between Myrtle Avenue and the Montauk Line railroad is a former movie theatre, RKO Keith's Richmond Hill Theater, opened in 1929, functioning since 1968 as a bingo hall.[4]

The northern edge of Richmond Hill contains the Church of the Resurrection. This Episcopalian church is an 1874 structure and is the oldest house of worship in Richmond Hill. It was placed in the National Register of Historic Places in 2002.[5]

Originally, many European families (Italian, Dutch, British, Irish, Scotch, Danish, and German) had lived in Richmond Hill. There is a north and south Richmond Hill. The division is Atlantic Avenue. Today the southside of Richmond Hill mostly consists of South Asian Americans and Caribbean Americans. Richmond Hill has the largest Sikh population in the City of New York and also contributes to the diversity of the borough of Queens. Since the 1970s many Caribbean Indians from Guyana, Trinidad and some from Jamaica have emigrated to the United States, especially to Richmond Hill and Jamaica in Queens, and brought the Hindu and Muslim traditions to their new home. 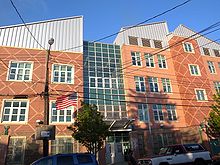 Richmond Hill schools are operated by the New York City Department of Education.

Residents are zoned to M.S. 137 America's School of Heroes.

Richmond Hill High School is located in the neighborhood. Until May, 2011, the city had planned to close the high school.[1]