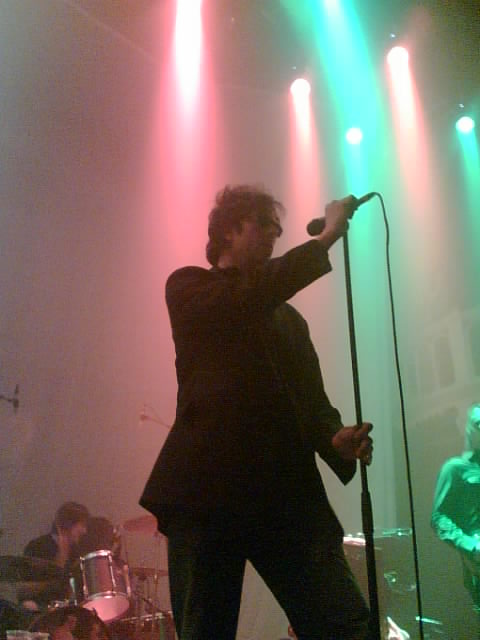 Ian Stephen McCulloch (born ) is an English best known for his work with . He was born in .

McCulloch was a with the , one of many local bands that sprung up amongst the regulars who patronized a Liverpool club called Eric's in the late seventies. The other two members were , later of and who went on to form Wah!

In 1978 McCulloch formed with (guitar), (bass) and a drum machine (allegedly named Echo), making their live debut at Eric's later that year. In 1979 the Bunnymen exchanged the drum machine for on drums. With their line up solidified, the Bunnymen enjoyed critical acclaim in the late seventies and early eighties culminating with the release of "" in 1984. McCulloch left to pursue a solo career under the impression the Bunnymen would be laid to rest if only temporarily. When the remaining Bunnymen continued using the name with new singer , the split became permanent with McCulloch referring to the band as "Echo & the Bogusmen".

In 1990 McCulloch achieved modest chart success with the album "" which reflected a more mature outlook on the world, owing to the recent deaths of McCulloch's father and . It yielded two singles, "Proud To Fall" (#1 for four weeks) and "Faith and Healing". The album "Mysterio" was released in 1992 as the public's interest in the former Bunnyman was waning. Shortly after, McCulloch left the public eye to devote more time to his family.

In 1993 McCulloch partnered with of , writing an album's worth of material and generating public excitement over the collaboration of two highly regarded artists. McCulloch has credited Marr with helping him regain his lost confidence and rejuvenating his desire to create music. When it was suggested that be brought in to work on the songs, the tapes were allegedly stolen from a courier van preventing Sergeant from offering any input. Rumour has it that Marr was in fact so angry over Sergeant being brought in, he refused to hand over the masters.

The rekindling of the relationship between McCulloch and Sergeant led to the formation of in 1994 which was notable for band's rock oriented approach and McCulloch's new found vocal ferocity. The band received glowing live reviews and released the album "Burned" to very positive press but little chart success. The band soon found themselves performing set lists composed of half songs and half songs. In 1997 reformed and released the album "Evergreen" to positive reviews and chart success. The reformed Bunnymen have since released three further albums to generally favourable reviews, the most recent being "Siberia" which was released in late 2005.

In 2003 McCulloch released his third solo album "" which received the best reviews of his solo career and saw a solo tour in support of the album.

McCulloch has cited , , , and - in particular - as influences for his work.

At the height of the Bunnymen's popularity, McCulloch earned the nickname "Mac the Mouth" due to a penchant for witty, blunt criticism of artists he deemed inferior, while proclaiming the Bunnymen's superiority. Targets of his observations included of , , Paul Weller and .

In 1998, McCulloch teamed up with the , Tommy Scott of Space and Simon Fowler of as "England United" to record "Top of the World", the official song for Team England in the , although it fared less well than a reissue of "Three Lions". He enjoyed more success working as a sort of 'associate producer' with Coldplay. Mac has been a lifetime supporter of the . In 2006, he took part in recording the team's anthem with the Bootroom Allstars - a remake of the song "Ring of Fire".

In 1983 McCulloch married Lorraine Fox. They have two daughters, Candy and Mimi. The couple separated in 2003.

McCulloch was raised in the area of Liverpool. The road on which he originally lived, "Parthenon Drive", is the title of a song contained in the 2006 Echo & the Bunnymen album "Siberia".