The Nationaal Lucht- en Ruimtevaartlaboratorium (NLR) is the National Aerospace Laboratory of the Netherlands and is one of the Major Technological Institutes of the country. These institutes perform a large part of the applied research in the Netherlands, each within its own specific field of technology. As an independent non-profit organisation, NLR is the central institute for aerospace research in the Netherlands and provides high-quality technical support to the aerospace sector (NLR is ISO 9001:2000/AQAP-110 certified).

NLR's activities are market-oriented, independent, socially relevant and without profit priority. By acting so, NLR can adequately respond to the need for scientific knowledge and technology in the field of aviation and space travel, which arises from the government, public and industry. Thus being the natural partner for aerospace research. Work under research contracts (national and international, government and industry) amounts to 75 percent of NLR's activities, the remaining 25 percent is funded by the Dutch government for basic demand-oriented research programmes and development of research equipment. Depending on the project and the customer's preferences, NLR acts as a sole contractor or as a subcontractor co-operating with other institutes or partners from industry. Research and development work is carried out on a project basis with great synergy between divisions and departments. Strong emphasis is laid on a customer oriented approach.

NLR's position in the Netherlands and the World 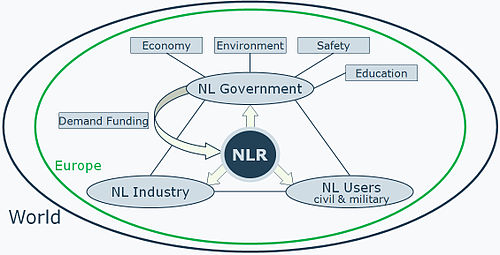 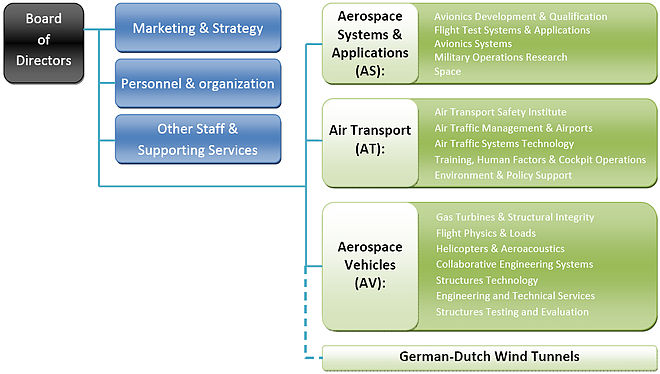 The RSL, the predecessor of NLR, was officially founded on 5 April 1919, shortly after the First World War. Although air power did not play a decisive role during this war, aeronautics had nevertheless progressed very rapidly during that period. Aeronautics developed slowly in the Netherlands during the first two decades of this century when compared to the neighbouring countries, as for example France. After the Armistice, 11 November 1918, the aeronautical community started to concentrate on the application of the newly obtained skills and experience. The Government appointed a committee to review the possibilities of aerial applications. The year 1919 saw many new initiatives. On Saturday 5 April 1919 (when Saturday was a normal working day), the new Laboratory of the RSL was officially opened in the presence of representatives of the Government in a building at the Navy Yard in Amsterdam. However, at this official opening there was already a laboratory in operation. The laboratory RSL was given an excellent start, although the human and material resources were limited.

In his opening speech Prof. L.A. van Royen emphasized that the RSL should develop free and open communications with the aeronautical world and in turn the RSL should be assisted to come into contact with those who are interested in the activities of RSL. The interested parts should also be able to influence the activities of RSL. The RSL was originated at offices belonging to the Ministry of Defence mainly as a result of the aviation activities of the Army (since 1913) and the Navy (since 1917). The groundwork for the foundation of RSL started in 1917, in the middle of the First World War, when civil aviation in the Netherlands was non-existent. On 1 January 1920 the RSL was transfer from the Ministry of Defence to the Ministry of Public Works because after the war the defence spending was cut drastically and civil aviation appeared in the horizon. As early as 1922, the Minister of Public Works proposed to terminate RSL. The main argument was that the annual funding was considered extravagant. Fortunately nothing happened immediately and the dispute continued for many years. When in 1918 the RSL was planned, the location at the Navy Yard in Amsterdam was meant as a temporary site only. Prof. van Royen intended to establish a permanent laboratory in Delft, in close association with Delft University of Technology (TU Delft). However, the university apparently was not too eager to accommodate the RSL, probably because of the problems encountered in the 1920s after the RSL became part of the Ministry of Public Works. Also, flight testing had become an important part of the activities and several people felt that a location close to Schiphol and Fokker was more important than being close to TU Delft. The RSL essentially developed along the lines as planned during 1918-1919, till it was converted in the independent Foundation NLL in 1937. The only major change in its formal task took place when a separate Department of Civil Aviation (RLD) was created to supervise airworthiness and aircraft operations in the Netherlands. However this did not have much effect on the technical content of the work of the RSL; it was a separation of responsibilities. This shift of responsibilities was related to the desire of the aircraft industry in the 1930s to have a national laboratory to which all interested parts would have access on an equal basis, according to Ir. A.J. Marx.

The centre piece of the laboratory was an Eiffel type wind tunnel. The construction of the wind tunnel was complicated because with only limited information available, Dr. Ir. E.B. Wolff managed to produce an operational tunnel by March 1919 and it was shown at the official opening of the RSL.

Figure 4: The original layout of the Wind Tunnel of the RSL

The tunnel – essentially a pipe with two open ends – had the air drawn from the room in which the tunnel was placed and it was exhausted into that same room at the other end. It must me assumed that he decided on an Eiffel type tunnel because of the size and limitations of the building and on the results published by Eiffel. Through this arrangement he achieved at least a facility of reasonable size and Reynolds Number. The tunnel had an open test section and, with a maximum power of 30 Horsepower, the mean velocity at the 1.6 meter diameter test section was 25 m/s. However, the uniformity of the flow across the test section was quite unsatisfactory and large fluctuations in time occurred. After investigations of the flow in the wind tunnel, several modifications were introduced. The result was that by July 1920 a fairly uniform and steady air flow of about 35 m/s in the test section was obtained. This tunnel was used extensively for a period of 20 years for a variety of aeronautical and non-aeronautical tests and, apart from smaller research facilities which were built at TU Delft, it was the only wind tunnel available for aeronautical development in the Netherlands till 1940. In the meantime Wolff and Koning carried out studies for new wind tunnel facilities. As a result two closed type wind tunnels were built in the new laboratory at Sloterweg in Amsterdam that became fully operational in 1940. One was the LST 3 x 2 m² which was large enough to simulate powered aircraft flight and a smaller, the LST 1.5 x 1.5 m² tunnel for research purposes and non-aeronautical wind tunnel testing. They were the main low speed aerodynamics facilities for over 40 years till the DNW (the joint venture with the German sister organisation DLR) became operational in 1980, followed by the LST 3 x 2.25 m² of NLR, both in the Noordoostpolder.

Figure 5: Aerial view of the NLL at the Sloterweg in Amsterdam

During the five years of the Second World War the total contract work-load of the laboratory decreased dramatically although the personnel increased by 40%.[1] However, it appears that a large number of subjects were studied in depth.[1] When the Allied Forces entered the Netherlands in September 1944 the situation changed very dramatically. The food and fuel supply, already at a bare minimum, practically stopped. Everybody at the laboratory was mentally occupied with the problems of war, survival, food and fuel. It took several months after the Liberation Day on 5 May 1945 for the normal operations of the laboratory to become re-established. Although the laboratory did not incur physical damage during the war, it was not in good condition after the war. Above that, until 1952 there was a political climate unfavourable to NLL especially in terms of financial support for the expansion plans of the NLL that included a HST, among other facilities.

Figure 6: Aerial view of NLL in Amsterdam around 1960 with the uncovered HST in the rear

The year 1950 marked the beginning of international co-operation and cross utilisation of facilities between NLL and ONERA. On 23 February 1955 a contract between AICMA-CIPS and NLL was signed which stipulated that NLL would make available the HST to members of AICMA for up to 50% of the available testing time. Later, in 1976, a two-nation aeronautical test facility, the DNW of Germany and the Netherlands, became a reality, and it took until 1988 when finally a four-nation (France, Germany, the UK and the Netherlands) aeronautical test facility, the ETW, was opened. In 1957, after a period of deliberations and negotiations, an area of 2 square kilometres was purchased in the Noordoostpolder (NOP). In 1958 the first NLR employees started working there. Since then there has been a gradual shift of activities from Amsterdam the NOP and several buildings were added.

A staff of approximately 700 people is employed at two sites, one located in Amsterdam, and the other in Noordoostpolder (a region about 100 km north-east of Amsterdam). Over two-thirds of the staff are graduates from universities or technical colleges, with a large variety in specialised professions such as aerospace engineers, psychologists, mathematicians and physicists. Such variety is necessary for ensuring the broad expertise that is needed for coping with the most challenging problems in the aerospace sector.

At its two sites NLR owns several sophisticated aerospace research facilities, including different wind tunnels, such as the Low Speed Wind tunnel, the Transonic and the Supersonic Wind Tunnel. Exploitation of these wind tunnels and the wind tunnels of DLR have been entrusted to the foundation German-Dutch wind tunnels (DNW), which also includes a large facility in the Noordoostpolder in which Germany and the Netherlands have a share of 50%.

NLR has developed different flight simulators for research on aircraft and helicopters. One of these simulators, the “National Simulation Facility”, is provided for air-to-air and air-to-ground missions with a movement mechanism of six degrees of freedom of the F-16 Cockpit in Mid Life Update configuration for research.

NLR has installations in which airplane constructions on full scale, components and test samples can be tested. Equipment and software for development of construction of parts for airplanes and space vehicles are also available. For development and construction of composites a special laboratory has been arranged. Moreover the NLR has instrumentation for flight tests, and several specialized apparatus for development of avionics. Facilities for testing antenna and conduction of so-called environmental tests are used to test several equipments. In the micromechanics workplace the NLR develops models and instruments for wind tunnel tests. The computer network of the NLR contains a supercomputer for the implementation of extensive aerodynamic and structural calculations.