listen), Lithuanian: Maurungėnai) is a town in northern Poland in Ostróda County in the Warmian-Masurian Voivodeship about 60 km (37.28 mi) south of the Polish - Russian border. The nearest city is Olsztyn, 44 km to the southeast.

The town was founded as Mohrungen by the Teutonic Knights in 1302 in eastern Prussia and in 1327 attained Kulm law from Hermann von Oettingen. The original inhabitants of the town were emigrants from the southern Harz. The War between the Teutonic Order and Poland saw the town incinerated completely in 1414. Mohrungen was occupied by the Grand Duchy of Lithuania and the Kingdom of Poland from 1410 to 1461.

Mohrungen was on a shipping commerce line connecting Truso with harbors at the Black Sea. Agriculture and commerce was the primary occupations in the town. It was known as a cattle and grain market.[1]

From 1525 to 1701 Mohrungen was part of Ducal Prussia and became part of the Kingdom of Prussia in 1701. It was the seat of the district administration of Landkreis Mohrungen since 1752. An earthquake struck the town in 1818. Until 1945 Mohrungen belonged to Germany. After World War II the local populace was expelled and the town became part of Poland as Morąg.

Since May 2010 the town is the garrison of a US Army Patriot Missile Defense battery.[2] 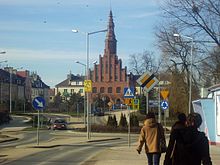 After a fire in 1697 only the castle and the church, which was restored and rebuilt several times, survived. Following World War II in 1945 fires burnt about 45% of the town. Only the outer walls of the town hall remained.