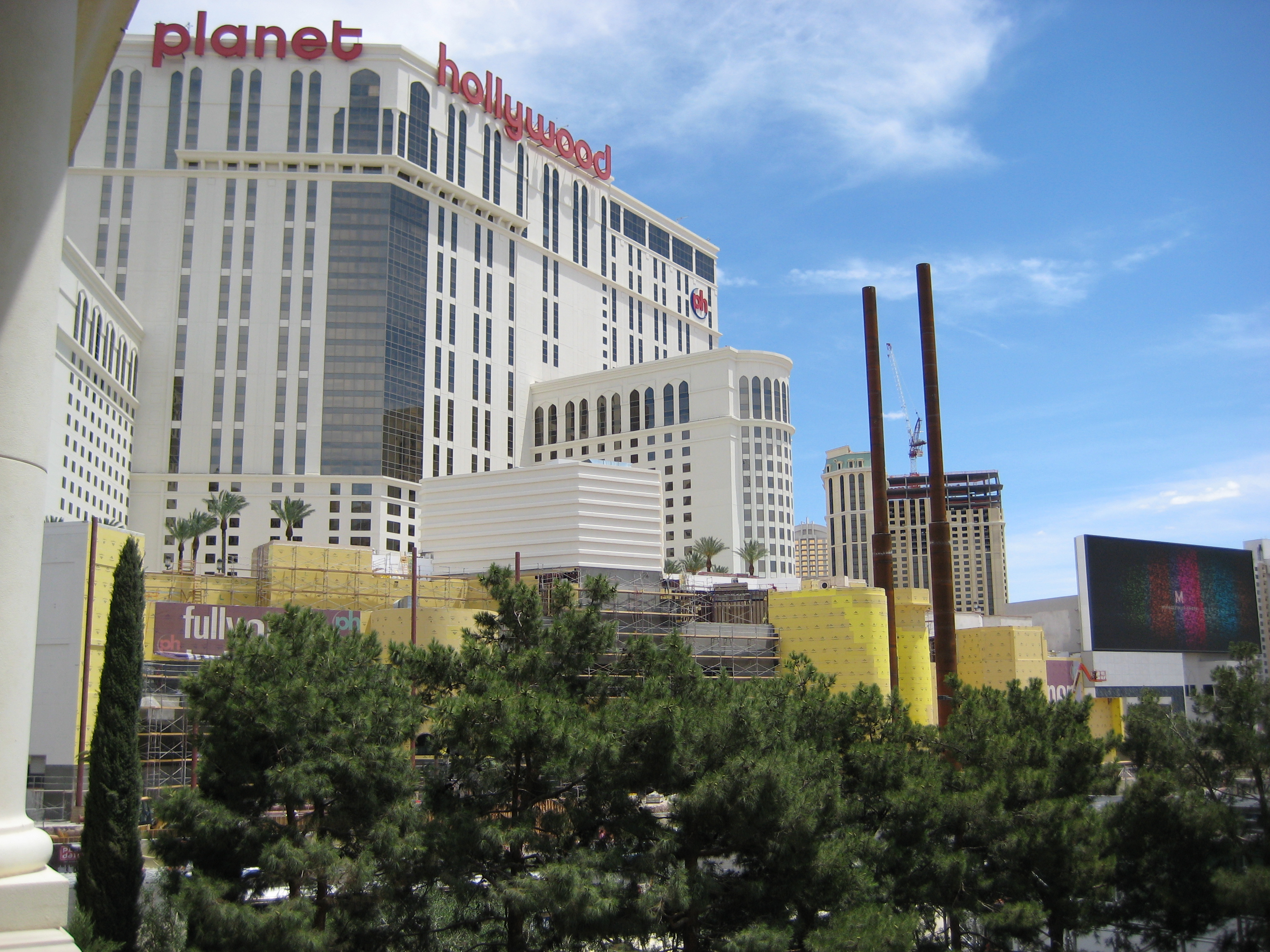 Planet Hollywood Las Vegas is a casino resort on the in unincorporated Clark County, , .

The resort was formerly known as The Aladdin. is ing the hotel as a and will operate the hotel portion of the project. rebranded and operates the rest of the property under the Planet Hollywood brand.

The property is owned by , which is a partnership of Robert Earl, and Starwood Hotels & Resorts Worldwide.

The casino was originally opened in 1963 as the Tally-Ho. It was later called King's Crown in 1964 and failed after six months when it was denied a gaming license.

In 1966, the King's Crown was purchased by , and the hotel got a $3 million renovation, including a new 500 seat "Bagdad Theater" showroom. Prell turned the English-themed hotel into an Arabian Nights theme, but kept the original Tudor style room wings. A serrated canopy and a $750,000 15-story "Aladdin's Lamp" sign were also added.

The Aladdin opened on , , with flower petals pouring from the ceiling and onto guests as they entered the hall. One guest was composer-pianist Warren Richards. The opening entertainment included comedian , the "Jet Set Revue," a musical review that showcased The Three Cheers and the Petite Rockette Dancers in the "Bagdad Theatre".

The Aladdin contained a 9-hole .

A little more than a year after it was opened, the Aladdin was host to Elvis and 's .

In August 1969, the Aladdin completed a $750,000 makeover including renovations to the Lounge, which became enclosed and leveled above the casino floor with Arabic motif.

Also in 1969, Parvin Dohrmann Corporation took over the Aladdin, and in 1972, using the name Recrion Corporation, sold it to Sam Diamond, St. Louis politicians Peter Webbe and Sorkis Webbe, and St. Louis attorney Richard L. Daly for the price of just $5 million. Under the new owners, a $60 million face lift was conducted, including the addition of a 19-story tower and the new 7,500 seat Performing Arts Center replacing the golf course, which was $4 million over budget.

A $250,000 continued the tower's s. The Aladdin also added a new $300,000 140-foot blockbuster sign with little , huge attraction panels and none of the arabesque of the Aladdin's original sign.

In 1981 heavy metal band Iron Maiden played at the Aladdin - it was their first ever concert in America.

The Aladdin closed on , . On , , the entire resort was imploded, [http://edition.cnn.com/US/9804/27/fringe.aladdin.implode/aladdin.240.43.mov] except for the Aladdin Theatre, to make way for the construction of an entirely new casino.

The Aladdin was scheduled to reopen on , , at 6:00pm, with fireworks at 10:00pm. The opening was delayed while the Clark County building inspector completed its fire safety testing. Another delay was caused by last-minute repairs to the casino system. This left thousands of Aladdin visitors leaving in disappointment, as well as opening night hotel guests wondering where they'd spend the night. Many s waited out on the sidewalks in front of the Aladdin for hours. Most were unable to even get to their luggage, since the hotel had been locked down for testing. Aladdin employees tried to arrange alternate accommodations for the guests with Paris and Bellagio.

Meanwhile, the mall was opened with "" star opening the doors to let the large crowd in.

The Aladdin finally opened the next day at 7:45 A.M. 100 members of Local 226, as well as an estimated 1,000 to 2,000 other workers were marching on Las Vegas Boulevard to protest the Aladdin opening without a union . Barbara Eden's speech as well as the other festivities were drowned out by the s and the rest of the protest.

The casino was in financial trouble from the start and was sold on , , to a partnership of Planet Hollywood and Starwood Hotels & Resorts Worldwide.

Renovations were carried out in stages, allowing the resort to remain open throughout. Planet Hollywood Las Vegas includes an expanded casino, new s, new and retail space. A redesign of the facade and plaza was intended to correct defects that made accessing the property from the sidewalks on The Strip difficult.

As of October 2007, about a third to half of the retail space formerly known as "The Desert Passage" had been converted into the new, themed "Miracle Mile Shops." This includes new, black flooring in place of the old uneven type walkway as well as the abandonment of the Arabian marketplace theme for a more conventional mall look. Despite the renovations, the popular rain show still exists and the V Theater still appears as it always has.

After the casino was renovated, it was reopened on , as Planet Hollywood Casino and Resort.

The attached -themed , "Desert Passage", was updated to reflect the resort's new theme, and was renamed "" [ [http://www.canyouhandlethismuchshopping.com/ Miracle Mile ] ] .

The official grand opening of Planet Hollywood Casino and Resort was the weekend of , .

The Planet Hollywood restaurant, however, remains at .

Footage of the implosion of the original structure was used in the closing credits of the film "".

This casino was used in the filming of "".

The show "" sometimes takes place at the resort.

The Rambo (2008) world premier took place at Planet Hollywood on , .

Scenes from the 2008 movie 21 were shot in Planet Hollywood.

The Planet Hollywood hotel is prominently featured in the movie as the hotel were the Fullers stay and get married.