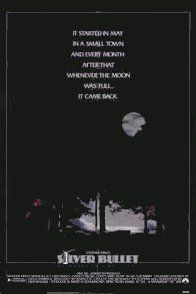 The film opens in a small rural town, Tarker's Mills, that is set upon by a death of a railroad worker, (Gammon). Although he is murdered by a , the county concludes that Arnie passed out on the railroad tracks and was run over by a train.

Later on, a woman, (), is slaughtered in her bedroom. This murder goes unsolved and the town's concerns grow.

The narrator of the film is the older sister, Jane (Follows), of a family of four. Her narration centers around her relationship with her younger, paraplegic brother Marty (Haim). Immediately upon their introduction, the story depicts the rocky affair between the 'handicapped' little brother and the over burdened 'older sister', their relationship strained from the start. The next victim, Milt Sturmfuller (), is a drunken redneck who hears someone destroying his flower pots in a shed not far from his house. Believing it is mischievous , Sturmfuller plans to go ward them off with a shotgun. After arriving in the shed, he is killed by the .

It isn't until the brutal slaying of a teenage male, (), that townsfolks are at the verge of abandoning local authorities and seeking their own kind of 'private justice'. In the middle of the melee is a Baptist Reverend, Lester Lowe (McGill), who initially parades as a concerned member of the community attempting to prevent the townfolks from invoking further bloodshed.

The citizens go to hunt the and several of them are attacked and killed by the monster, including Owen Knopfler (), although the survivors of the encounter later deny seeing anything unusual.

The nicest surprise in the film comes in the form of the alcoholic Uncle Red (Busey). His 'no care in the world' approach to life is a large contrast to the prudish demeanor of the people in this town of Tarker's Mills. The uncle concocts a wheelchair/motorcycle for his nephew's birthday - that is the vehicle by which the nephew sets upon in the middle of the night along a small bridge to light up fireworks. At this moment he is confronted by a and barely escapes with his life if not for the launching of a firerocket into the left eye of the creature.

Marty enlists the help of Jane in looking for a town regular with a missing left eye. She conducts this search through a bottle drive, so as not to arouse suspicion. She finds it in the form of the Reverend Lowe. That ignites a cat and mouse chase between the siblings threatening to disclose of the Reverend's true lunar transformations. Lowe, in turn, using morale to rationalize the murders of sinners - in order to prevent them from eternal damnation in - sets out to kill Marty. It is implied that Lowe is now completely insane. Finally, the courageous sibling duo manage to convince Red that things smell afoul with Lowe. Uncle Red then convinces local Sheriff Joe Haller (O'Quinn) to investigate Reverend Lowe. That night, Haller, skeptical about Lowe at first but desperate to find a killer, is shocked to discover evidence that at least some of Marty's story may be factual. Haller then finds Lowe, who has locked himself in his garage, but before he can arrest him, Lowe transforms and kills Haller.

At the end of the film, Red, Marty, and Jane have a final showdown with the big bad wolf. The only thing that stands between their survival or horrific demise: a . Marty shoots the in the right eye, killing him. Afterwards, Marty and Jane share a tender moment together following their ordeal. The brother/sister bond between them is forever strengthened.

* The UK release of the film in 2001 contains the original movie trailer and spoken commentary by director Daniel Attias, both of which are not available on any other officially released DVD, including the US edition which was finally released on , .

*Foreign-language adaptations have often based their titles on some variation of "The Werewolf of Tarker's Mill" instead of "Silver Bullet".

*The werewolf was designed and created by special effects autuer (, , , .)