Pilot certification in the United States

Pilot certification in the United States 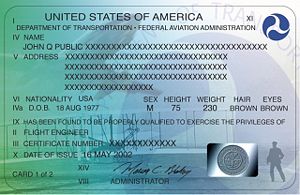 Front side of an airman certificate issued by the FAA. 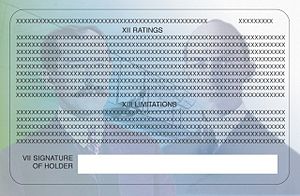 Back side of an airman certificate issued by the FAA.

Pilot certification in the United States is required for an individual to act as a pilot of an aircraft. It is regulated by the Federal Aviation Administration (FAA), a branch of the Department of Transportation (DOT). A pilot is certificated under the authority of Parts 61 and 141 of Title 14 of the Code of Federal Regulations, also known as the Federal Aviation Regulations (FARs).

Categories of aircraft for which a pilot may be rated are:[1][2]

Most aircraft categories are further broken down into classes. If a category is so divided, a pilot must hold a class rating to operate an aircraft in that class:[1]

A student pilot certificate does not list category or class ratings but is instead endorsed by a flight instructor to confer privileges in specific makes and models of aircraft.

A type rating is required in a specific make and model of aircraft if the aircraft weighs more than 12,500 lb (5,700 kg) at takeoff or is powered by one or more turbojet engines. The Boeing 747, Beechcraft Super King Air 350, and the Hawker Hunter are examples of aircraft that require type ratings.[1]

The FAA may impose limitations on a pilot certificate if, during training or the practical test, the pilot does not demonstrate all skills necessary to exercise all privileges of a privilege level, category, class or type rating. For example, a holder of a DC-3 type rating who does not demonstrate instrument flying skills during the practical test would be assigned a limitation reading, "DC-3 (VFR Only)".

To obtain a certificate or add a rating, a pilot usually has to undergo a course of training with a certificated instructor, accumulate and log specific aeronautical experience, and pass a three-part examination: a knowledge test (a computerized multiple-choice test, typically called the "written test"), an oral test, and a practical test carried out by either an FAA inspector or a Designated Pilot Examiner.

Another form of authorization is an endorsement from a flight instructor that establishes that the certificate holder has received training in specific skill areas that do not warrant a full test, such as the ability to fly a tailwheel-equipped, high-performance, complex, or pressurized airplane.

Pilot certificates other than student pilot certificates do not expire, although they may be suspended or revoked by the FAA.[4] However, a pilot must maintain currency — recent flight experience that is relevant to the flight being undertaken. To remain current, every pilot has to undergo a flight review with an instructor every 24 calendar months unless he gains a new pilot certificate or rating in that time or satisfies the flight review requirement using an alternate approved means. For most types of certificate, he must also undergo a medical examination at intervals ranging from six months to five years, depending on the pilot's age and desired flight privileges. Other currency requirements apply to the carriage of passengers or to flight under instrument flight rules (IFR).

Most pilots in the U.S. undergo flight training as private individuals with a flight instructor, who may be employed by a flight school. Those who have decided on aviation as a career often begin with an undergraduate aviation-based education. Some pilots are trained in the armed forces, and are issued with civilian certificates based on their military record. Others are trained directly by airlines. The pilot may choose to be trained under Part 61 or Part 141 of the FARs. Part 141 requires that a certified flight school provide an approved, structured course of training, which includes a specified number of hours of ground training (for example, 35 hours for Private Pilot in an airplane). Part 61 sets out a list of knowledge and experience requirements, and is more suitable for students who cannot commit to a structured plan, or for training from freelance instructors.

Most pilot certificates and ratings require the applicant to pass a knowledge test, also called the "written test". The knowledge test results are valid for a period of 2 years, and are usually a prerequisite for practical tests. Resources available to prepare for the knowledge test may be obtained from pilot supply stores or vendors. The exceptions where a knowledge exam is not required for a practical test are for some add-on ratings after the initial license, such as a powered aircraft pilot adding an additional category rating at the same license level.[6]

In order to take knowledge tests for all pilot certificates and ratings, the applicant must have a sign-off from a ground or flight instructor. These are usually given by an instructor who has taught a ground school course, provided ground instruction or reviewed the applicant's self-study preparations.

All pilots certificates and ratings require a practical test, usually called a "check ride". For each practical test, the FAA has published a Practical Test Standards document which is expected to be used by the applicant to prepare, by the flight instructor to teach and evaluate readiness for the exam, and by the examiner to conduct the exam. A practical test is administered by an FAA Inspector or an FAA Designated Pilot Examiner. The check-ride is divided into two parts: the oral exam followed by a flight test in the aircraft. Upon successful completion of the practical test, the examiner will issue a temporary airman certificate with the new license or rating.

In order to take practical tests for all pilot certificates and ratings (except Airline Transport Pilot), the applicant must have proper logbook endorsements from their flight instructor.

In aviation, a pilot's level of income and experience are closely related. There are multiple ways to gain the experience to be hired by a scheduled air carrier. Air carriers generally require that the pilots they hire have hours of experience far in excess of the legal minimum. This experience is often gained using these common methods:

The FAA offers a progression of pilot certificates, each with its own set of privileges and limitations.

The Sport Pilot certificate was created in September 2004 after years of work by the Experimental Aircraft Association (EAA)). The intent of the new rule was to lower the barriers of entry into aviation and make flying more affordable and accessible.

The new rule also created the Light Sport Aircraft (LSA) category of aircraft which are smaller, lower-powered aircraft. The sport pilot certificate offers limited privileges mainly for recreational use. It is the only powered aircraft certificate that does not require a medical certificate; a valid vehicle driver's license can be used as proof of medical competence provided the prospective pilot was not rejected for their last Airman Medical Certificate (see Sport Pilot Catch 22).

Before a trainee can start the solo phase of flight training, a Student Sport Pilot Certificate must be issued by the Federal Aviation Administration (FAA). These may be obtained from an FAA Flight Standards District Office or FAA Designated Pilot Examiner.

To qualify for the Sport pilot certificate, an applicant must:[8]

The above requirements are for heavier-than-air powered aircraft (airplanes). The requirements for gliders, balloons, helicopters, and dirigibles vary slightly.

The restrictions placed on a Pilot exercising the privileges of a Sport pilot certificate are:

The Sport pilot certificate is also ineligible for additional ratings (such as an Instrument rating), although time in light-sport aircraft can be used towards the experience requirement of other ratings on higher certificate types.

The private pilot certificate is the certificate held by the majority of active pilots. It allows command of any aircraft (subject to appropriate ratings) for any non-commercial purpose, and gives almost unlimited authority to fly under visual flight rules (VFR). Passengers may be carried and flight in furtherance of a business is permitted; however, a private pilot may not be compensated in any way for services as a pilot, although passengers can pay a pro rata share of flight expenses, such as fuel or rental costs. Private pilots may also operate charity flights, subject to certain restrictions, and may participate in similar activities, such as Angel Flight, Civil Air Patrol and many others.

The requirements to obtain a private pilot certificate for "airplane, single-engine, land", or ASEL, (which is the most common certificate) are:[10]

A commercial airplane pilot must be able to operate a complex airplane, as a specific number of hours of complex (or turbine-powered) aircraft time are among the prerequisites, and at least a portion of the practical examination is performed in a complex aircraft.

By itself, this certificate does not permit the pilot to set up an operation that carries members of the public for hire; such operations are governed by other regulations. Otherwise, a commercial pilot can be paid for certain types of operation, such as banner towing, agricultural applications, and photography, and can be paid for instructing if he holds a flight instructor certificate. To fly for hire, the pilot must hold a second class medical certificate, which is valid for 12 months.

Often, the commercial certificate will reduce the pilot’s insurance premiums, as it is evidence of training to a higher safety standard.

An airline transport pilot (commonly called an "ATP") is tested to the highest level of piloting ability. The certificate is a prerequisite for acting as a pilot-in-command in scheduled airline operations.

The minimum pilot experience is 1,500 hours of flight time, 500 hours of cross-country flight time, 100 hours of night flight time, and 75 hours instrument operations time (simulated or actual). Other requirements include being 23 years of age, an instrument rating, being able to read, write, speak, and understand the English language, a rigorous written examination, and being of good moral character.[12]

These numbers are based on the highest certifications held by individual pilots.

Other certificates and ratings

United States military pilots are issued an Aviator Badge upon completion of flight training and issuance of a pilot's certificate. Badges for crew or ground positions are also issued to qualified applicants. 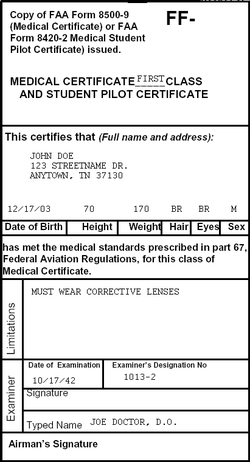 All certified pilots, with the exception of those with a sport pilot certificate (or when in command of balloons or gliders), are required to maintain a medical certification commensurate with the privileges they intend to exercise as pilot-in-command of an aircraft.

For sport pilot certificate applicants or holders, regulations state that a medical is required if the applicant/pilot does not hold a valid United States drivers license.

To qualify for a second class medical certificate, pilots must meet the requirements for the third class certificate plus:

Second class certificates are valid until the last day of the month, twelve months after they were issued. The certificate holder may then only exercise the privileges of a third class medical certificate.

First class certificates are required for those intending to be pilot-in-command in an air carrier operation requiring an Airline Transport Pilot (ATP) certificate. Other operations, including those under Part 91, may require a first class medical for insurance purposes, although it is not a federal requirement in such cases.

To qualify for the first class medical certificate, pilots must meet the requirements for the third and second class certificates plus:

Restrictions may be placed upon a medical certificate to mitigate any concern for safety. For instance, color-blind pilots are typically issued a restriction reading, "NOT VALID FOR NIGHT FLIGHT OR BY COLOR SIGNAL CONTROL." This mitigates the concern that color-blind pilots may not be able to identify those colors required for the performance of safe airman duties by preventing situations that are considered potentially unsafe.

In many cases, these restrictions can be removed through a "Statement of Demonstrated Ability" (SODA), or a "Letter of Evidence" from the FAA indicating that the pilot's deficiency is of no concern.

In addition to pilot licenses the FAA also issues other airmen certificates.

Pilots do not need FCC licenses to use the radio within the United States (pilot certificates double as FCC radio licenses); however, other countries may require that a pilot have an FCC Restricted Radiotelephone Operator Permit (RR), and the aircraft radio station be licensed.