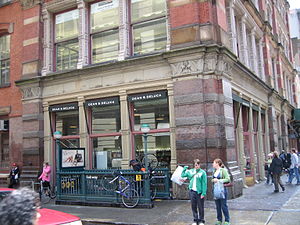 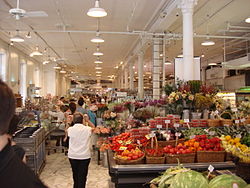 Inside view of the store in SoHo

Dean & DeLuca is a chain of upscale grocery stores. The first one was established in New York City's SoHo district by Joel Dean, Giorgio DeLuca and Jack Ceglic[1] in September 1977. It is headquartered in Wichita, Kansas.

In 1988 in New York City a new Dean & DeLuca market opened at the corner of Broadway and Prince Streets[2]. Smaller retail outlets followed in Manhattan’s Rockefeller Plaza and in the Paramount Hotel. Espresso Bars are also located around New York and in Washington, D.C.

The major retail locations offer catering services within their local area. Dean & DeLuca's newest branch opened at Villagio Mall in Qatar , in May 2010. It is planned to open a store in Argentina at Puerto Madero, Buenos Aires.[3]