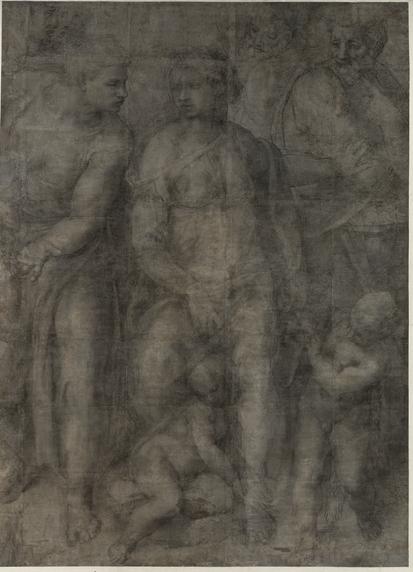 The composition shows the , with the Christ child standing between her legs. An adult male figure to the right, probably , is pushed away by Mary. In front of him is the infant St . The adult figure standing to Mary's left is unidentified, as are other figures only just visible in the background. Michelangelo repeatedly changed the composition and its forms, as its apparent in the cartoon's alterations. The composition was originally thought to be of the , which may be the reason for the title, but is now understood as referring to Christ's siblings mentioned in the Gospels (explained by Saint Epiphanias—another possible source for the title—as Joseph's sons by a previous marriage, and hence Mary's stepsons, leaving their marriage unconsummated—hence her pushing Joseph away—and Mary forever a virgin).

Michelangelo's biographer used this cartoon for an unfinished painting. A 19th-century Scottish collector called John Malcolm of Poltalloch in Scotland bought it for only £11 0s 6d. and, on John's death in 1893, his son John Wingfield Malcolm gave it to the Museum (with Parliament voting £25,000 to purchase the rest of his collection for the Museum two years later). The cartoon is now on display in Gallery 90 of the Museum, and has the catalogue reference PD 1895-9-15-518.