The End Is the Beginning Is the End

The End Is the Beginning Is the End

Infobox Single
Name = The End Is the Beginning Is the End 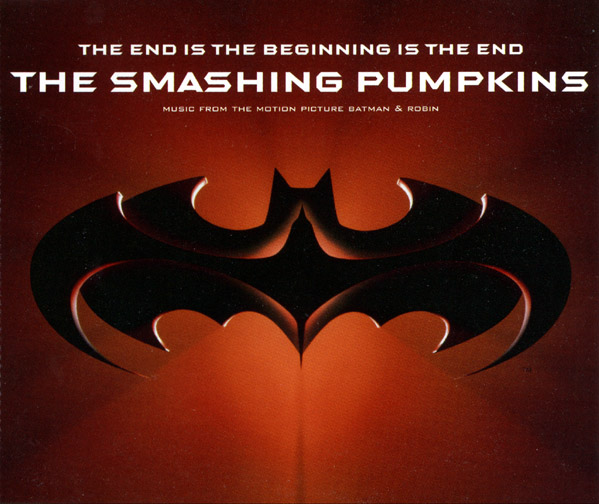 
"The End Is the Beginning Is the End" is a song by . It was the first full-band song released as a single by the Pumpkins in the aftermath of their 1995 album, "". It was the first release to include a performance by drummer Matt Walker; he would later perform on several tracks on "Adore" and all of 's "Let It Come Down".

The song was released on the "Batman & Robin" soundtrack and was written by . The song won the 1998 Grammy Award for Best Hard Rock Performance.

Billy Corgan said of the song,

He further commented that the song's lyrics were meant to represent the Batman of the 1940s, when he was a "darker character." [" [http://smashingpumpkins.com/news_4859 Billy Corgan on the Watchmen] ". SmashingPumpkins.com. 2008-07-19.]

Many fans saw the new metal-guitar and electronica-driven sound of "TEITBITE" (The End Is the Beginning Is the End) as a taste of the sound of the next Smashing Pumpkins album, with Corgan himself saying the sound is "probably like what you would expect from us in the future." However, the loud guitars of "TEITBITE" are relatively nowhere to be found on the band's next album, "Adore".

Despite its Grammy win and a strong promotion in conjunction with "Batman & Robin", "TEITBITE" has not had a strong legacy in the US. While it was well-received by American rock radio, the song found particularly strong chart success in other countries, reaching the top ten of both the Australian and . The band performed the song live several times around its release in 1997, but did not perform it again until their 2008 tour of the United States.

TEITBITE, along with "Eye," released on the "" soundtrack, and "Christmastime," from , is one of three Pumpkins songs released on "various artists" compilations between "Mellon Collie" and "Adore".

The single contained three other versions of the song, although they are titled as different tracks. Two are electronica-inspired instrumentals of the song, while the other ("The Beginning Is the End Is the Beginning") is a more melancholy version with different lyrics. "The Beginning Is the End Is the Beginning" was used in a trailer for the 2009 film adaptation of "Watchmen" (which, coincidentally, made its first appearance attached to the 2008 Batman film ""). Its appearance in that trailer helped the song break into the Top 100 during the summer of 2008. [" [http://www.gigwise.com/news/44795/smashing-pumpkins-song-boosted-by-appearance-in-watchmen-movie Smashing Pumpkins Song Boosted by Appearance in Watchmen Movie] " Gigwise.com. 2008-07-22.] For his part, "love [s] the way it’s used in the trailer" but "can only imagine this terrifies" his fans who "seem to be confused when the outside world appreciates our work". [" [http://latimesblogs.latimes.com/herocomplex/2008/07/corghan-talks-w.html Hero Complex: Corgan Talks 'Watchmen' Music] " Los Angeles Times. 2008-07-29.] Prior to its inclusion in the trailer, it was "a version of that song that never seemed to get any notice", but as Corgan ultimately discovered, " [c] ertainly the massive jump in on-line sales seems to indicate it might be worth it for us and for the movie." [ [http://latimesblogs.latimes.com/herocomplex/2008/07/corghan-talks-w.html Ibid] .]

Since the single and video were released under , the band were unable to use them for future releases, leaving them notably absent from their "Greatest Hits" DVD and CD releases.

The music video was directed by , Jonathan Dayton, and Valerie Faris. It features the members of the Pumpkins flying in front of images from the Batman film. The video is notable for being only one of two Smashing Pumpkins videos to have a different drummer besides Jimmy Chamberlin (Kenny Aronoff is briefly visible during the Perfect video) and is the only video with Matt Walker on the drums before his departure. The video was also nominated at the 1997 for Best Editing, Best Cinematography, Best Special Effects and Best Direction.

The music video for this song appears on the second disc of the "Batman and Robin: Special Edition" DVD (also on the "Batman: The Motion Picture Anthology 1989-1997" DVD boxset), released in October 2005.

Billy Corgan has expressed interest in releasing a new music video for the TEITBITE version of the song to tie in with the upcoming 2009 film "Watchmen", but he said he is "Still waiting on that one". [ [http://latimesblogs.latimes.com/herocomplex/2008/07/corghan-talks-w.html Ibid] .]