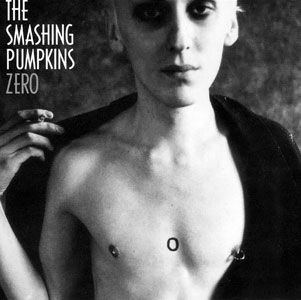 "Zero" is a song by . It was the third single from their third album, "" and was a return to the familiar angsty rock of the first single, "". This style of their music was called "Cybermetal" by . "Zero" was written by Corgan and was the first song recorded for "Mellon Collie". The song has six rhythm guitars, with two line-in twelve string acoustics. [Guitar World - January 1997]

"Zero" was played virtually intact, but simply played quicker than usual during the "Mellon Collie..." tour. It was almost never played during the promotion and tour for "", only as a brief teaser, but was reintroduced in the brief "Arising!" tour in 1999. The "Sacred & Profane" tour of 2000 included a variant: it started off with a pulsing drumbeat and build-up to the song, which then would be played in style reminiscent of speed metal, removing much of the nuance and grunge-sludge anthemic appeal of song. Late in the tour, the band would segue from "" into "Zero", the same as "Everlasting Gaze" was segued into "" or "". Billy changed "and God is empty just like me" part for "and God is empty just like you" for the tour. "I'm your lover, I'm your zero" was also changed to "I'm your lover, I was your zero".Zero was reintroduced in 2007 in the promotional tour for the band's reunion album .

The music video was directed by , her first of many contributions to the band. The concept of it was to set it in a Roman Mansion, with lounging guests, while the band acts as their entertainment. The band predominantly wears black, which contrasts the room's vibrant wine-stained colors that are associated with the Roman period. The official presidential portrait of is hanging in the room.

Unlike most singles, "Zero" was released as an EP and included "Pastichio Medley", a of parts of songs from the "Mellon Collie" sessions that mostly remain unreleased. The medley runs over 23 minutes and features over 70 songs. [ [http://www-personal.umich.edu/~brt/sp/songs/pastichio.html Pastichio Medley ] ] The medley also features snippets of songs that actually were released; the snippet of the song "Disconnected" is a riff from an early version of "" and the riff called "Rachel" ended up being worked into the album track "X.Y.U.".

The track "Tribute to Johnny" is an instrumental; a homage to guitarist . Not long after the release of the EP, Smashing Pumpkins touring keyboardist died of a overdose, leading many uninformed fans to assume this song was a tribute to Melvoin.

Covers and other uses

*The band has covered the song "Zero" on many occasions.
*The song was featured on "" episode "", where the band appeared as themselves.
*The metalcore band Evergreen Terrace have a recorded cover of "Zero" on two albums. Once on their cover album "Writer's Block", and a live cover on "".
*The band provided a cover version of the song for the tribute album ""
*A master recording of the song became available as downloadable content on the video game "Rock Band" on April 29, 2008.

All songs written by Billy Corgan unless otherwise noted.