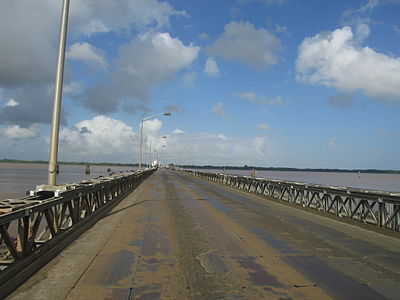 The Demerara River is a river in eastern Guyana that rises in the central rainforests of the country and flows to the north for 346 kilometres until it reaches the Atlantic Ocean. Georgetown, Guyana's largest seaport and capital, is situated on the east bank of the river's mouth. The Demerara's estuary is narrow and the flowrate is rapid. This scouring action maintains a 5-6 metre deep direct channel to the ocean. The river's deep brown color is primarily the result of the massive quantities of silt carried from upriver by the powerful currents. So powerful are these currents, that the ocean retains the Demerara's brown color for a considerable distance out to sea.

The Demerara's width and depth allow oceangoing vessels to navigate up to Linden (105 km from the mouth), while smaller vessels may reach up to Malali (245 km from the mouth). Beyond Malali, numerous rapids make further upstream travel impossible.

The islands Inver, Borselem, and Biesen are found 15 to 20 miles from the mouth. Borselem was once the location of the Dutch capital of Demerara.

A Dutch colony of the same name (see Demerara) was situated along the river's banks. The colony founded the sugarcane industry that continues to thrive today. Sugar from this industry is used to make the widely exported El Dorado Rum [1]. Bauxite is also mined around the Demerara, and Linden is a major export centre.