In an effort to pull British resources from the observed build-up in the Somme, the XIII (Royal Württemberg) Corps and the 117th Infantry Division attacked an arc of high ground positions defended by the Canadian Corps. The German forces initially captured the heights at Mount Sorrel and Tor Top before entrenching on the far slope of the ridge. Following a number attacks and counterattacks, two divisions of the Canadian Corps, supported by the 20th Light Division and Second Army siege and howitzer battery groups, recaptured the majority of their former positions.

Located in the Ypres Salient, 3 kilometres (1.9 mi) east of Ypres, Belgium, the Battle of Mount Sorrel took place along a ridge between Hooge and Zwartelee. The crest line of Mount Sorrel, nearby Tor Top (Hill 62) and Hill 61 rose approximately 30 meters higher than the shallow ground at Zillebeke, affording the occupying force excellent observation over the salient, the town of Ypres and approach routes.[2] The peaks were the only portion of the crest of the Ypres ridge which remained in Allied hands.[3]

In northern France, men and resources were being amassed in preparation for the large-scale joint British-French Somme Offensive. The British and French build-up in the Somme did not, however, go unnoticed by the German Supreme Army Command. German Second Army, which was holding the sector north of the Somme had observed preparations for a major attack since the end of February 1916.[4] With limited disposable resources due to operations at Verdun, the Germans were limited to localized operations in an effort to divert British resources away from the Somme.[5]

On 28 May 1916, in an abrupt change of command, Lieutenant-General Edwin Alderson was appointed to the largely ceremonial post of Inspector General of Canadian Forces in England and was succeeded by Lieutenant-General Julian Byng as commander of the Canadian Corps.[6]

As the Canadians began preparations for an assault, the Germans were in the process of executing an assault plan of their own. The XIII (Royal Württemberg) Corps spent six weeks planning and carefully preparing their attack on the Mount Sorrel, Tor Top (Hill 62) and Hill 61 peaks. Their objective was to take control of the observation positions east of Ypres and keep as many British units as possible pinned down in the area, to avoid them transferring to the Somme region and assisting with the observed build-up in that area.[2] The Germans constructed practice trenches resembling the Canadian positions near Tor Top, well behind their own lines, to rehearse the assault.[2] 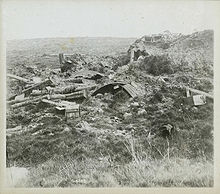 Destroyed dugouts and shelters. Prior to the war, most of the terrain here was heavily wooded.

The Allies were not, however, completely unaware of the German activities. In mid-May, aerial reconnaissance near Mont Sorrel indicated that German forces were preparing for an offensive against Allied positions. Royal Flying Corps observers had noted the existence of works curiously resembling the Canadian positions well behind the enemy lines.[2] The Germans were also observed digging new sap trenches which implied that an assault was intended.[2] The Canadian Corps had just begun developing plans to overrun the more dangerous German positions when the Germans executed an assault of their own.

On the morning of 2 June the German XIII Corps began a massive artillery bombardment of heavy calibre shells against the Canadian positions. Nine-tenths of the Canadian forward reconnaissance battalion became casualties during the bombardment.[9] 3rd Canadian Division commander Major-General Malcolm Mercer and 8th Canadian Brigade commander Brigadier-General Arthur Victor Seymour Williams had been conducting an inspection of the front line on 3 June when the shelling began.[2] Mercer was wounded three times and died; Williams was wounded in the face and head and taken prisoner.[9]

At 1:00pm, German pioneers detonated a series of four mines near the Canadian forward trenches before the Germans attacked with six battalions.[2] Five more battalions were in support and an additional six in reserve.[10] When the German forces attacked, mainly against positions held by the 8th Canadian Brigade, resistance at the front lines was "minimal".[11] For several critical hours both the 3rd Canadian Division and the 8th Canadian Brigade were leaderless, and their level of defence suffered accordingly. Brigadier-General Edward Spencer Hoare Nairne, of the Lahore Divisional Artillery eventually assumed temporary command of the 3rd Canadian Division.[2] However, German forces were still able to capture Mont Sorrel and Hill 61. After advancing up to 1,200 yards, the XIII Corps dug in.[12][13] Although the road to Ypres was open and undefended, no German officer took the initiative to exceed instructions and capitalize on the success experienced by the German forces.[2]

Lieutenant-General Byng assembled a hastily organized counterattack in the early hours of 3 June. Owing to the 3rd Canadian Division’s heavy losses, two brigades of the 1st Canadian Division were temporarily placed under the control of Brigadier-General Hoare Nairne, who had assumed control of 3rd Canadian Division[14][15] The counterattack was scheduled to begin at 2:00 am on 3 June 1916.[14] However, due to the distances that had to be covered by incoming units, the difficulties in communications and ever present enemy fire, the time allowed for assembly proved inadequate and the attack was postponed until 7:00 am.[16] The signal to attack was to be six simultaneous green rockets. However, some rockets misfired and did not burst resulting in an uneven assault whereby each unit moved from their starting lines at different times.[9] The four attacking battalions suffered heavy losses as they advanced over open ground in broad daylight.[16] The attack failed to regain any lost territory. It did however manage to close a 600 yards (550 m) gap in the line and advance the Canadian front about 1,000 yards (910 m) from the positions it had retreated to after the German assault.[16]

British Expeditionary Force commander Field Marshal Douglas Haig and Second Army commander General Herbert Plumer both believed it necessary to expel the Germans from their newly captured positions.[16] However, in view of the preparations for the Somme offensive, Haig did not wish to divert more forces than was necessary. Support was therefore limited to a number of additional artillery units and an infantry brigade from the 20th Light Division.[15] It was suggested that the next counterattack be carried out with the infantry available, with a particularly large emphasis placed on artillery.

The additional artillery units immediately went to work hampering the Germans' consolidation efforts by shelling their front and support lines and seeking out hostile batteries.[17] The Germans however surprised the Canadians by exploding four large mines under trenches of the 2nd Canadian Division covering the spur at the eastern outskirts of the ruins of Hooge.[18] An entire company of the Canadian 28th (North West) Battalion was wiped out in the explosion.[18] The Canadians managed to defend their position and prevent the Germans from reaching their support line, but Byng ultimately decided to leave the Hooge trenches in German hands and to concentrate on regaining Mount Sorrel and Tor Top.[19] To dissuade the Germans against further attacks on the Canadian Corps' left flank, the dismounted British 2nd Cavalry Brigade came on loan to the Canadian Corps as a counter-attack force.[19] 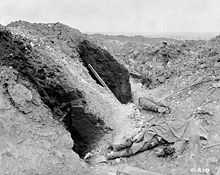 Byng ordered 1st Canadian Division commander Major-General Arthur Currie to organize a careful attack against the German positions at Mont Sorrel and Tor Top.[20] Due to the casualties suffered during the unsuccessful counterattack of 3 June, Currie regrouped his stronger battalions into two composite brigades.[19] Four intense bombardments of 30 minutes each were carried out between 9 and 12 June in an effort to deceive the Germans into expecting immediate attacks, which did not transpire.[19] For ten hours on 12 June all the German positions between Hill 60 and Sanctuary Wood were shelled unremittingly.[19] Particular attention was given to the Canadian Corps' flanks from which enfilade machine-gun fire might be expected.[19] The following morning, the Germans were subjected to an additional 45 minutes of heavy artillery bombardment before the assaulting troops advanced behind a generated smoke screen.[19][20] The Germans are believed to have been taken largely by surprise as they offered little resistance, and the Canadians were able to take approximately 200 prisoners.[19] With the exception of the trenches at Hooge, the Germans fell back to the their original lines and in a little over an hour the assault was over.[18] On 14 June the Germans launched two failed counterattacks after which they advanced their trench to within 150 meters of the Canadians but made no further assaults.[19][20]

The Canadian Corps remained in the Ypres Salient in a stationary yet aggressive status until the beginning of September when the corps was transferred to the Somme.[21] In the aftermath of the battle and in the wake of the death of Major-General M.S. Mercer, Canadian Corps commander Julian Byng was forced to address the politically sensitive topic of appointing a new 3rd Canadian Division commander.[22] Canadian Minister of Militia and Defence Sam Hughes telegraphed Byng and insisted that his son, 1st Canadian Brigade commander Brigadier-General Garnet Hughes, be given command of the 3rd Canadian Division.[20] However, to the fury of the minister Byng instead promoted 2nd Canadian Brigade commander Brigadier-General Louis Lipsett, a highly regarded pre-war British regular, to the post.[23] The minister protested and confronted Byng in August 1916, however Byng did not relent insisting that "he had nothing against Garnet Hughes there was simply a better man for the post".[20] The change in command between Lieutenant-General Edwin Alderson and Julian Byng was also used as an opportunity to make additional changes.[24] Much to the displeasure of Minister Hughes and delight of the Canadian troops, the unreliable Canadian Ross Rifle began to be replaced with the British Lee-Enfield and the Colt machine gun with the Vickers and Lewis machine guns.[20]