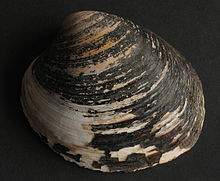 Arctica islandica, commonly known as the ocean quahog, is an edible marine bivalve mollusk native to the North Atlantic ocean, which is harvested commercially. This species is also known by a number of different common names, including Icelandic cyprine,[1] mahogany clam, mahogany quahog, black quahog, and black clam.[2]

The typical Arctica islandica resembles the quahog, but the shell of the ocean quahog is rounder, the periostracum is usually black, and on the interior of the shell, the pallial line has no indentation, or sinus. Unlike the quahog, which lives intertidally and can be collected by clam digging, this species lives subtidally, and can only be collected by dredging. They grow to sizes exceeding 50 mm shell height.[3]

These animals show exceptional longevity and have been estimated to live up to 400 years in the wild.[4] In 1868 one specimen, collected alive near Iceland, was 374 years old. The study of its growth rate and the oxygen isotope data showed that it had a highly variable growth at the peak of the Little Ice Age around 1550-1620 and mild climate near its end around 1765-1780 and had recorded the volcanic eruption of Mount Tambora in 1815. [5] One study found that in animals aged 4–192 years, antioxidant enzymes declined rapidly in the first 25 years, which includes the growth and sexual maturity stages, but afterwards remained stable for over 150 years. Though more detailed studies are warranted, it appears this species is a case of negligible senescence.[6]