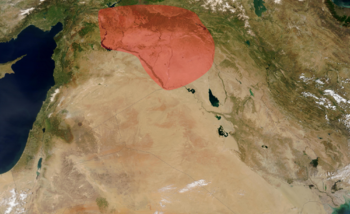 Al-Jazira region within the Middle East.

Upper Mesopotamia is the name used for the uplands and great outwash plain of northwestern Iraq and northeastern Syria and southeastern Turkey which is known by the traditional Arabic name of Al-Jazira (Arabic, الجزيرة), variously transliterated into Roman script as Djazirah, Djezirah and Jazirah.[1] It extends south from the mountains of Anatolia, east from the hills on the left bank of the Euphrates river, west from the mountains on the right bank of the Tigris river and includes the Sinjar plain. It extends down the Tigris to Samarra and down the Euphrates to Hit. The Khabur River runs for over 400 km across the plain, from Turkey in the north, feeding into the Euphrates. The major settlements are Mosul, Deir ez-Zor, Ar Raqqah, Al Hasakah, Busayrah, Diyarbakr and Qamishli. The western, Syrian part, is essentially contiguous with the Syrian Al-Hasakah Governorate. The eastern, Iraqi part, includes and extends slightly beyond the Iraqi Ninewa Governorate. In the north it includes the Turkish provinces of Şanlıurfa, Mardin, and parts of Diyarbakır Province.

The name Al-Jazira was used by Islamic sources to refer to the northern section of Mesopotamia, which together with Sawād, made up Al-‘arāq (Iraq). The name means "island", and at one time referred to the land between the two rivers. Historically the name referred to as little as the Sinjar plain coming down from the Sinjar Mountains, and as much as the entire plateau east of the coastal ranges. In pre-Abbasid times the western and eastern boundaries seem to have fluctuated, sometimes including what is now northern Syria to the west and Adiabene in the east.

Al-Jazira is characterised as a outwash or alluvial plain, quite distinct from the Syrian Desert and lower-lying central Mesopotamia; however the area includes eroded hills and incised streams. The region has several parts to it. In the northwest is one of the largest salt flats in the world, Sabkhat al-Jabbul. Further south, extending from Mosul to near Basra is a sandy desert not unlike the Empty Quarter, where temperatures reach 58 degrees Celsius in the summer. In the late 20th and early 21st Century the region has been plagued by drought.

Upper Mesopotamia is the heartland of ancient Assyria. From the 23rd Century BC it was part of the Akkadian Empire. When the empire broke up, the northern Akkadians formed Assyria, and from 2000 BC until 608 BC it was an integral part of the Assyrian nation, and the Neo Assyrian Empire. The region fell to the Assyrians' southern brethren, the Babylonians in 608 BC, and from 539 BC it became part of the Persian Achaemenid Empire where it was known as Athura (Persian for Assyria). From 330 BC it was ruled by the Greek Seleucid Empire, the Greeks corrupting the name to Syria. It then fell to the Parthians and Romans and was renamed Assyria by both. The area was still known as Assuristan (Assyria) under the Persian Sassanid Empire until the Arab Islamic conquest of the 7th Century AD when it was renamed al-Jazira.

Since pre-Arab and pre-Islamic times, al-Jazira has been an economically prosperous region with various agricultural (fruit and cereal) products, as well as a prolific manufacturing (food processing and cloth weaving) system. The region’s position at the border of the Sasanian and Byzantine territories also made it an important commercial center, and advantage that the region continued to enjoy, even after the Muslim conquest of Persia and Byzantine possessions in the Levant.

Al-Jazira included the Roman/Byzantine provinces of Osroene and Mesopotamia, as well as the Parthian/Persian provinces of Assuristan, Arbayestan, Nisibis, and Mosul.

The prosperity of the region and its high agricultural and manufacturing output made it an object of contest between the leaders of the early conquering Arab armies. Various conquerors tried, in vain, to bind various cities of the former Sassanian provinces, as well as the newly conquered Byzantine provinces of Mesopotamia, into a coherent unit under their own rule.

The control of the region, however, was essential to any power centered in Baghdad. Consequently, the establishment of the Abbasid Caliphate brought al-Jazira under the direct rule of the government in Baghdad. At this time, al-Jazira was one of the highest tax-yielding provinces of the Abbasid Empire.

During the early history of Islam, al-Jazira became a center for Kharijite (Xwārij) movement and had to be constantly subdued by various caliphs. Later, a local dynasty called the Hamdanids, themselves descendants of a Kharijite, established an autonomous state with two branches in al-Jazira and Northern Syria. The demise of the Hamdanid power put the region back under the nominal rule of the Caliphs of Baghdad, while actual control was in the hands of the Buyid brothers who had conquered Baghdad itself.

In subsequent eras, al-Jazira came under the control of newly established Muslim dynasties such as the Ikhshidids and the Zengis, and eventually was controlled by the Ayyubids (i.e. Saladin). Later development of the region was determined by the rise of Mosul and Nisibis, both important commercial and manufacturing centers. In the 12th century, the region was conquered and controlled by the Seljuk dynasty and was later put under the control of Seljuks of Rum, joining the emerging Ottoman Empire when the latter replaced the Seljuks of Rum in Asia Minor.

The region is the traditional homeland of the indigenous Assyrians, Aramaic speaking Christian descendants of the ancient Mesopotamians. Thousands of Assyrian refugees entered into Syrian Al-Jazira, from Turkey following the Assyrian Genocide of World War I. Additionally, in 1933 a further 24,000 Assyrian Christians fled into the area, following the Simele Massacre in the Mosul region of northern Iraq.[2]

Djezirah is one of the four dioceses of the Syrian Orthodox Church. The others are in Aleppo, Homs-Hama and Damascus.[3]

The area has experienced a high rate of emigration in the past 40 years. Prime factors have been drought and the emigration of Assyrian Christians due to religious and ethnic intolerance.