Island in the Sun (song)

Island in the Sun (song) 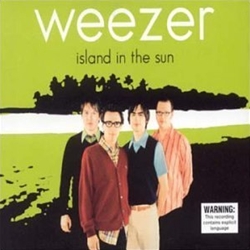 "Island in the Sun" is a 2001 single by . It is the second single from the band's album, "". "Island in the Sun" wasn't originally planned to be on the album, yet producer fought for the song and it ended up on the final product. It was a successful radio single and perhaps the band's biggest hit ever outside of the United States.

In late 2001, the band reworked the song's solo for their live show. In , would often open the band's encore by playing "Island in the Sun" alone on an acoustic guitar in the back of the venue they were playing. On some nights, he would back up the stage.

This song is much lighter than their previous, darker single

There are two different videos for the Weezer song.

Directed by .
This video shows Weezer playing the song at a Mexican couple's wedding reception and features all four band members. This version remains the more obscure of the two, receiving less airplay than the second, though it is the version available for download on .

Directed by .
This video features Weezer playing with various wild animals on a supposedly remote hill (though it was actually filmed a short distance outside of , which is thought to be in the near ). Only Brian Bell, , and Pat Wilson appear in this video, as then bassist had been kicked out of or had left the band shortly before shooting. It is also rumored that original bassist was approached to be in the video, though it is unclear if the offer was ever actually made.The executives at MTV disliked Siega's video, prompting the band to film Jonze's take. As a result, "Island in the Sun (Version Two)" had much wider play than the first version, and has become the standard video for the song.

An erroneous short mix of "Always" ended up on the singles, the correct mix (2:48) was released as an mp3 on the band's website.

Appearances in the Media

* [http://www.weezernet.com/index.php?page=lyrics&lid=35 Lyrics for "Island in the Sun"]