The MG3 is a German general-purpose machine gun chambered for the 7.62x51mm NATO cartridge. The weapon's design is derived from the World War II era MG 42 universal machine gun that fired the 7.92x57mm Mauser round.[2]

The MG3 was standardized in the late 1950s and adopted into service with the newly formed Bundeswehr, where it continues to serve to this day as a squad support weapon and vehicle-mounted machine gun. The weapon and its derivatives have also been acquired by the armed forces of over 30 countries. Production rights to the machine gun were purchased by Italy (MG 42/59), Spain, Pakistan (MG 1A3), Greece, Iran, Sudan and Turkey[3]. 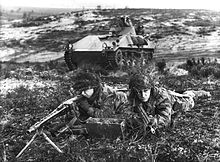 Soldiers of the West German Bundeswehr on exercise in 1960. Pictured is the predecessor to the MG3—the MG 1A3 variant. The soldier on the right is carrying a G3 battle rifle. In the rear stands a HS 30 APC.

Production of the first postwar variant of the MG 42 chambered in a standard NATO caliber (designated the MG 1) was launched in 1958 at the Rheinmetall arms factory as requested by the Bundeswehr. Shortly thereafter, the machine gun was modified, receiving a chrome-lined barrel and sights properly calibrated for the new round; this model would be named the MG 1A1 (known also as the MG 42/58).

A further development of the MG 1A1 was the MG 1A2 (MG 42/59), which had a heavier bolt (950 g, compared to 550 g), a new friction ring buffer and was adapted to use both the standard German continuous DM1 ammunition belt and the American M13 disintegrating belt. Further improvements to the weapon's muzzle device, bipod and bolt resulted in the MG 1A3.

Simultaneously, wartime 7.9mm MG 42 machine guns that remained in service were converted to chamber the standard 7.62x51 mm NATO round and designated MG 2.

In 1968, the MG3 was introduced and entered production. Compared to the MG1A3, the MG3 features an improved feeding mechanism with a belt retaining pawl to hold the belt up to the gun when the top cover plate is lifted, an added anti-aircraft sight and a new ammunition box. MG3s were produced for Germany and for export customers by Rheinmetall until 1979. Some additional production of the MG3 in Germany was carried out by Heckler & Koch.[4] The MG3 and its variants all share a high level of parts interchangeability with the original MG 42. 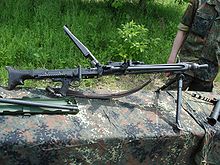 A partially disassembled MG3 of the German Army.

The MG3 is an automatic, air-cooled, belt-fed short recoil-operated firearm. It features a roller locked bolt mechanism that consists of the bolt head, a pair of rollers, the striker sleeve, bolt body and return spring. The bolt is locked securely by a wedge-shaped striker sleeve, which forces two cylindrical rollers contained in the bolt head outward, and into corresponding recesses in the extension of the breech of the barrel. On firing, both the barrel and barrel extension recoil to the rear. The resulting impact (much like a Newton's cradle) moves the carrier to the rear withdrawing the wedge and both rollers as they are cammed inward and out of their sockets by fixed cams, unlocking the bolt head. The bolt carrier and bolt then continue to the rear together guided by fixed guides while the barrel and barrel extension return to battery. Upon return of the bolt forward, the impact of the rollers against the camming surfaces on the breech carry the rollers from their seats, and, together with the surfaces on the striker sleeve, force the rollers outward, locking the bolt head into the barrel extension and ensuring a complete lock. The bolt also houses a spring-loaded casing extractor and ejector. Ejection is carried out when the ejector strikes the buffer head, sending a push forward through the ejector bar, which hits the ejector pin. This pin pushes the top of the base of the cartridge, which is still held by the extractor at the base, causing the empty casing to rotate and eject downward through the ejection chute.

The machine gun has an automatic-only trigger mechanism and a cross-bolt safety in the form of a button that is operated by the shooting hand (in its "safe" position the bolt release is disabled). The weapon fires from an open bolt. The cyclic rate can be altered by installing different bolts and recoil springs.

The MG3 feeds from the left side through a feed block using metal, 50-round continuous-link DM1 ammunition belts (which can be combined by cartridge) or disintegrating-link M13 or DM6 belts. In the light machine gun role, the MG3 is deployed with a 100-round belt fitted inside a synthetic ammunition drum developed by Heckler & Koch that is latched on to the left side of the receiver. The rear wall of the drum is transparent and serves as a visual indicator for the amount of ammunition available. The feed system operates through a feed arm that is housed in the feed cover. Two feed pawls are linked to the front end of the arm by an intermediate link and move in opposite directions, moving the belt in two stages as the bolt moves back and forward during firing.

The MG3 seen here in the stationary, heavy machine gun role, mounted on a stabilized Feldlafette tripod and fitted with an optical periscope sight.

The MG3 has a quick-change, chrome-lined barrel with 4 right-hand grooves and a rifling twist rate of 1 in 305 mm (1:12 in). Alternatively MG3 barrels can also have polygonal rifling. The barrel is integrated with the barrel breech. The barrel should be changed frequently during sustained firing. The gun is cocked and the barrel catch on the right of the barrel shroud is swung forward. The breech end of the hot barrel swings out and can be removed by elevating or twisting the gun. A fresh barrel is then inserted through the barrel catch and the muzzle bearing. When the catch is rotated back the barrel is locked and the machine gun can resume firing. Both the receiver housing and ventilated barrel casing are made from pressed sheet steel. A muzzle device is mounted at the end of the barrel and it acts as a flash suppressor, muzzle brake and recoil booster.

The machine gun is equipped with a synthetic polymer stock, a folding bipod and open-type iron sights (sliding rear U-notch on a ramp with range settings from 200 to 1,200 m). A flip-up anti-aircraft sight is also provided.

In a stationary, heavy machine gun role the MG3 is mounted on a buffered tripod called a Feldlafette and outfitted with a periscope sight that can be used to engage indirect targets.

German naval security troops deployed in a training scenario with an MG3 (1990s).

The MG3 is still used as the standard secondary weapon of most modern German armoured fighting vehicle designs (e.g. Leopard 2, PzH 2000, Marder), as a primary weapon on light/non-armored vehicles (e.g. LKW 2to, MAN gl-trucks, ATF Dingo) and as an infantry weapon on light bipods as well as different tripods. However, the German Armed Forces will phase out the MG 3 in 2012, they introduced the HK121 in 2011.[citation needed]

U.S. Marine and German soldier training with the MG3.

A pintle-mounted MG3A1 on a Norwegian armored vehicle.