Located in the triangle of land formed by the confluence of the Minnesota River and the Cottonwood River, the city is home to the Minnesota Music Hall of Fame, the Hermann Heights Monument, Martin Luther College, Flandrau State Park, and the August Schell Brewing Company. New Ulm is the episcopal see of the Roman Catholic Diocese of New Ulm.[5]

U.S. Route 14 and Minnesota State Highways 15 and 68 are three of the main arterial routes in the city.

The city was founded in 1854[6] by German immigrants Christian Ludwig Meyer, Alois Palmer, Athanasius Henle, and Franz Massopoust. The city was named after the city of Ulm in southern Germany. Today, Ulm and Neu-Ulm are New Ulm's sister cities. In part due to the city's German heritage, it is a center for brewing in the Upper Midwest, home to the August Schell Brewing Company.

The Kiesling House was one of three downtown buildings to survive the Dakota War and is listed on the National Register of Historic Places.

In the Dakota War of 1862, the city was attacked and burned by Taoyateduta (Little Crow) and his Dakota Sioux warriors.[7]

During World War II, German POWs were housed in a camp to the immediate southeast of New Ulm, in what is now Flandrau State Park. In 1944 a New Ulm family was fined $300 for removing a prisoner from the camp, housing him and taking him to church.[8]

The Historical Museum is housed in the old post office building, listed on the NRHP.

The Brown County Historical Society, located at 2 North Broadway houses 3 floors of exhibits and one of the largest archives in the state. It contains over 5,500 family files, microfilm of census, naturalization, church, cemetery and birth and death records as well as business and history files. [1]

Located at Center and State Streets, Defender's Monument was erected in 1891 by the State of Minnesota to honor the memory of the defenders who aided New Ulm during the Dakota War of 1862. The artwork at the base was created by New Ulm artist Anton Gag. The monument has not been changed since its completion (except for being moved to the middle of the block).

The Hermann Monument in New Ulm dominates the Minnesota River valley from a hill overlooking the city. Inspired by a similar monument called Hermannsdenkmal near Detmold, Germany, this figure served as a symbol for members of the Sons of Hermann, a fraternal organization of German Americans. In 1885 the 362 Sons of Hermann lodges across the country committed themselves to the construction of a monument representing their cultural heritage. Through the efforts of Minnesota’s 53 Sons of Hermann lodges, the monument was built in New Ulm, home to many German immigrants. The sculptor chosen for this project was a German sculptor from Ohio, Alfons Pelzer.

A 2000 years anniversary took place in New Ulm in September 2009, commemorating the Battle of the Teutoburg Forest in which Hermann successfully led a union of Germanic tribes against the Roman Legions under Varus in the year 9 AD.

Inscribed in granite slabs around the base of the monument are the surnames of over 350 immigrant families. Many of these names are still prominent in the region. As more and more immigrants arrived, not all of whom could farm, they settled in the city of New Ulm and some of the small communities to the west and north.

The bronze statue that rests on top of the granite base was designed and sculpted by Leopold Hafner, a German-Bohemian sculptor who now lives near Passau, Germany.

The monument is located at 200 North German Street and is open year-round.

New Ulm has been referred to as the City of Charm and Tradition.

New Ulm's glockenspiel is one of the world's few free-standing carillon clock towers. It stands 45 feet high, and its largest Bourdon (bell) weighs 595 pounds while the total weight of the bells is two tons. The bells chime the time of day in Westminster style.

In 1962 it was first suggested by the governor that Minnesota develop a museum or Hall of Fame to honor the rich music heritage Minnesota has to offer.

In 1990 New Ulm offered its old library building for the hall of fame site. Owing to the area's ethnic music heritage, the New Ulm was chosen. The Minnesota Music Hall of Fame, Inc. was established with categories reflecting the wide variety of Minnesota's musical heritage.

The museum has displays of music memorabilia for musicians and groups from around the state, including Prince, Judy Garland, Bob Dylan, and local artists Whoopee John Wilfahrt and The Six Fat Dutchmen. The Hall of Fame and museum is located at First North Street and Broadway. In summer the museum is open from Memorial Day through Labor Day each Thursday, Friday and Saturday from 10:00 a.m. until 4:00 p.m.

Each year in October the museum holds a gala to induct new members into the Hall of Fame, known locally as Minnesota's Grammies.

Polka capital of the nation

Music was always a part of life in New Ulm, especially with the arrival of the musically-inclined German-Bohemians in the 1870s. However, New Ulm took a major leap to national prominence in the 1920s.[citation needed]

Whoopee John Wilfahrt’s successful career opened the door to what became known as “Old-Time” music. After him, other local bands such as those led by Harold Loeffelmacher, Babe Wagner, Elmer Scheid and Fezz Fritsche kept New Ulm well-known around the state and region. They even produced nationally popular recordings.[citation needed]

With the opening of George’s Ballroom and the New Ulm Ballroom and the start of KNUJ radio station in the 1940s, New Ulm billed itself as the "Polka Capital of the Nation". [2] For years New Ulm's famous Polka Days were known worldwide by polka lovers.[citation needed] The festival was held each year in July. Polka Bands played on Minnesota Street and people danced and drank beer until well past midnight.

Parking meter checker stands by his police vehicle which is imprinted with the German word for police (Polizei). It is part of the town's highlighting its German ethnic origins. New Ulm, Minnesota, July 1974.

Local events held annually in New Ulm have celebrated the German culture through food, music, and beer. New Ulm's Oktoberfest has been celebrated the first two weekends in October since 1981.[9] Bock Fest, often scheduled concurrently[10] with the local festivities for Fasching, has been celebrated since 1987 at the August Schell Brewing Company.[11] The current summer festival, Bavarian Blast, was created as a recent re-interpretation of New Ulm's longstanding festival, Heritagefest.

New Ulm was the setting and filming location of the 1995 independent film The Toilers and the Wayfarers, directed by Keith Froelich. The city was a filming location for the 2004 documentary American Beer. It is also the setting of the 2009 movie New in Town, starring Renee Zellweger and Harry Connick Jr., although no part of the movie was actually filmed there.

There were 5,494 households out of which 29.6% had children under the age of 18 living with them, 52.9% were married couples living together, 8.9% had a female householder with no husband present, and 35.3% were non-families. 31.0% of all households were made up of individuals and 14.4% had someone living alone who was 65 years of age or older. The average household size was 2.31 and the average family size was 2.89.

In 2002 the U.S. Census Bureau released a report showing New Ulm has 65.85% of population with German ancestry, more per capita than any other city in the U.S. 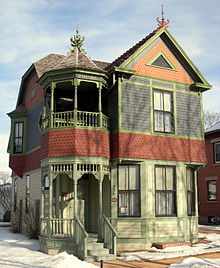