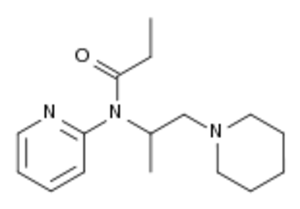 Propiram (Algeril, Dirame, Bay 4503) is an partial mu receptor agonist and weak mu antagonist from the ampromide family of drugs. It was invented in 1963 in the United Kingdom by Bayer but was not widely marketed, although it saw some limited clinical use, especially in dentistry. A report in the reference "Drug Facts & Comparisons", 56th (2002) Edition reports that research about the drug has increased in the past few years, having reached the (albeit restricted) Stage III clinical trial process in the United States and Canada. Propiram is currently a Schedule I/Narcotic controlled substance in the United States. It has been almost exclusively used as the fumarate salt, which has a free base conversion ratio of 0.70.

Propiram exhibits weak opioid antagonist activity on the mu receptor -- quite a bit weaker than its agonist effects -- and the effect on kappa and delta opioid, sigma receptors, or the system are not well understood. Other drugs of the partial mu-opioid agonist/antagonist type include , , , , , , and its relatives.

With about 10 per cent of the analgesic potency of with 50 mg being equivalent to more than 60 mg of codeine or 50 mg of pentazocine in many patients, propiram is an effective analgesic comparable to other drugs such as these as well as , with a normal dose of around 50-100mg and a duration of action of 3 to 6 hours. [Wilson RS, Landers JH. Use of a new oral analgesic, propiram fumarate, in treating postoperative ocular pain. "Annals of Ophthalmology". 1982 Dec;14(12):1172-4.] It is more potent and effective than codeine, [Desjardins PJ, Cooper SA, Gallegos TL, Allwein JB, Reynolds DC, Kruger GO, Beaver WT. The relative analgesic efficacy of propiram fumarate, codeine, aspirin, and placebo in post-impaction dental pain. "Journal of Clinical Pharmacology". 1984 Jan;24(1):35-42.] and longer lasting and with a faster onset of action compared to pethidine. [Korduba CA, Veals J, Radwanski E, Symchowicz S, Chung M. Bioavailability of orally administered propiram fumarate in humans. "Journal of Pharmaceutical Sciences". 1981 May;70(5):521-3.] Side effects include , , and . [Goa KL, Brogden RN. Propiram. A review of its pharmacodynamic and pharmacokinetic properties, and clinical use as an analgesic. "Drugs". 1993 Sep;46(3):428-45.] Propiram has been available in oral, rectal, and injectable formulations, with bioavailability above 97 per cent after oral administration.