The buttocks (singular: buttock) are two rounded portions of the anatomy, located on the posterior of the pelvic region of apes and humans, and many other bipeds or quadrupeds, and comprise a layer of fat superimposed on the gluteus maximus and gluteus medius muscles. Physiologically, the buttocks enable weight to be taken off the feet while sitting. Many cultures have also used them as a safe target for corporal punishment,[1] and for some cultures they play a role in sexual attraction.[2] There are several connotations of buttocks in art, fashion, culture and humor, and the English language is replete with many popular synonyms.

The buttocks allow primates to sit upright without needing to rest their weight on their feet as four-legged animals do. Females of certain species of baboon have red buttocks that blush to attract males. In the case of humans, females tend to have proportionally wider and thicker buttocks due to higher subcutaneous fat and proportionally wider hips.

Some baboons and all gibbons, though otherwise fur-covered, have characteristic naked callosities on their buttocks. While human children generally have smooth buttocks, mature males and females have varying degrees of hair growth, as on other parts of their body. Females may have hair growth in the gluteal cleft (including around the anus), sometimes extending laterally onto the lower aspect of the cheeks. Males may have hair growth over some or all of the buttocks.

The English word of Greek origin "callipygian" indicates someone who has beautiful buttocks. However, the qualities that make buttocks beautiful or well-formed are not fixed, as sexual aesthetics of the buttocks vary considerably from culture to culture, from one period of fashion to another and even from person to person.

In ancient astrology, various parts of the body were associated with signs of the zodiac - e.g. the buttocks to Libra (The Balance). Depending on the context, exposure of the buttocks in non-intimate situations often causes feelings of shame, embarrassment or humiliation in a non-exhibitionist subject, and embarrassment or amusement in a non-voyeurist audience (see pantsing). Expressions such as being caught with one's pants/ trousers down or more explicitly in Dutch, "met de billen bloot" ("with bared buttocks"), use the image as a metaphor for non-physical embarrassment as well.

Willfully exposing one's own bare buttocks as a protest, a provocation, or just for fun is called mooning.

A wedgie is pulling someone's undergarments or swimming trunks up through their buttock crack to be hauled over the top of the victim's trousers, sometimes partially baring the victim's buttocks.

It is no coincidence that the English verb to spank is the only one specifically meant for physical discipline of a specific part of the body, and various other languages have terms specifically referring to spanking;[citation needed] in many punitive traditions, the buttocks are the preferential target for painful lessons, from educational to judicial, as offering them for punishment (especially uncovered) adds a psychological dose of embarrassment and even sexual humiliation to the pain, which can be meted out with less risk of long term physical harm than elsewhere. There are, in various cultural traditions, expressions like "seat of learning" which refer to the preferential paining of the posterior in a submissively bent and exposed position.[original research?]

Many comedians, writers and others rely on the buttocks in these and other ways (such as flatulence and toilet humor) as a source of amusement, camaraderie and fun, despite (or in some cases for the sake of) the risk of being in dubious taste, if not censored. 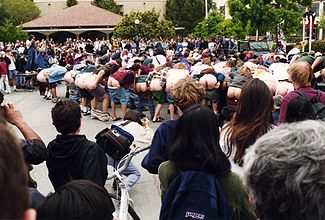 Students at Stanford University conduct a "mass-mooning" in May 1995

In the majority of modern cultures, the buttocks are rarely shown naked and are generally considered unsuitable for ornamental body markings and body modification. However, they may be preferential for discreet markings, such as secretive membership proof or to be shown in intimate company (e.g. amongst lovers).

In American English, phrases use the buttocks or synonyms (especially "butt" and "ass") as a synecdoche or pars pro toto for a whole person, but generally with a negative connotation. For example, terminating an employee may be described as "firing his ass". One might say "move your ass" or "haul ass" (or the polite, understood euphemisms "move it" or "haul it") as an exhortation to greater haste or urgency. Expressed as a function of punishment, defeat or assault becomes "kicking one's ass". Such phrases also may suggest a person's characteristics, e.g. difficult people are termed "hard asses" (polite euphemism: "hard nosed"). People deemed excessively puritanical or proper may be termed "tight asses" (in Australia and New Zealand, "tight arse" refers to someone who is excessively miserly). An annoying person or any source of frustration may be termed "a pain in the arse" (euphemism: "a pain in the neck", though some claim that this alleged euphemism actually appeared in English earlier than the former). An incompetent or ignorant person is sometimes called a "dumbass", and an annoying person a "jackass".

Certain physical dispositions of the buttocks—particularly size—are sometimes identified, controversially, as a racial characteristic (see race). The most famous intersection of racism and buttocks may be the case of Saartjie Baartman, the so-called Hottentot Venus.

See WikiSaurus:buttocks for a list of synonyms and slang words for buttocks in many languages. For unrelated homophones of butt(ocks), see also butt (disambiguation) and bud (disambiguation)

The anatomical Latin name for the buttocks is nates (

/ˈneɪtiːz/ nay-teez)[3], which is plural; the singular, natis (buttock), is rarely used. There are many colloquial terms to refer to them, including: 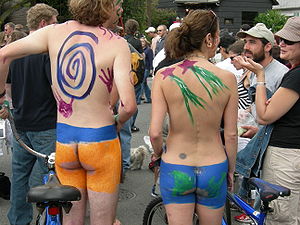 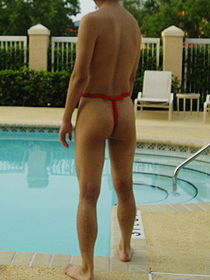 Because many cultures have a nudity taboo, which usually applies specifically to the buttocks (as usually to the most erogenous zones), mainstream garments generally cover the buttocks completely, even when it is not a practical requirement. Nevertheless male and female clothing is often designed in a way that reveals the shape of the buttocks under the clothing.

Some articles of clothing are designed to expose the buttocks. Such clothing is not generally worn in public situations; however, it is sometimes considered appropriate to wear such clothing at swimming facilities or at the beach.

Emphasis on one part or another of the body tends to shift with generations. The 1880s were well-known for the fashion trend among women called the bustle, which made even the smallest buttocks appear huge. The popularity of this fashion is shown in the famous Georges Seurat painting A Sunday Afternoon on the Island of La Grande Jatte in the two women to the far left and right. Like long underwear with the ubiquitous 'butt flap' (used to allow baring only the bottom with a simple gesture, as for hygiene), this clothing style was acknowledged in popular media such as cartoons and comics for generations afterward.

More recently, the cleavage of the buttocks is sometimes exposed by some women, deliberately or accidentally, as fashion dictated trousers be worn lower, as with hip-hugger pants.

An example of another attitude in an otherwise hardly exhibitionist culture is the Japanese fundoshi.