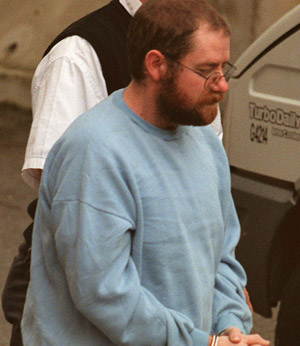 Bunting, driven to murder by his hatred for s and s, has been described as a skilled manipulator of people and "Australia's worst serial killer".

Bunting was the ringleader of a "degenerate sub-culture"

Bunting lived in from November 1991, living on Lohman Street until he moved to Burdekin Avenue in May 1997 where he remained until September 1998. Two of his victims would be found in the backyard of his former home in Waterloo Corner Road, Salisbury North, a northern suburb of Adelaide, with the remaining eight discovered in a vault of a disused bank rented by Bunting and Haydon in , 140 km north of Adelaide. Bunting would insist on playing the 1994 "Live" album "" during many of his later murders.

Bunting had fashioned a " wall" on a wall of a spare room in his house. The chart, created using paper notes and wool, was an interconnected web of names of people Bunting suspected to be pedophiles or homosexuals. At times Bunting would randomly select a name from the wall and call them, insinuating they were paedophiles and "would get what's coming to them".fact|date=September 2008

Bunting was married to Elizabeth Harvey, mother of co-offender James Vlassakis. Bunting would spend a lot of time with Vlassakis, assuming the role of a . Bunting regularly communicated to Vlassakis his hatred for paedophiles and homosexuals. Vlassakis confided in Bunting that Vlassakis's step-brother, Troy Youde, had sexually abused him at the age of thirteen. Bunting replied by suggesting that Youde be bashed.

Vlassakis would later give evidence against Bunting, Wagner and Haydon at their criminal trials. Elizabeth Harvey has since died from cancer.

Bunting met Wagner when he moved to Waterloo Corner Rd. Wagner was living with Barry Lane at the time; both men assisted Bunting in disposing of the body of his first victim, Clinton Trezise. Wagner would later assist Bunting in the remaining ten murders to follow.

Bunting's murder spree began in August 1992, with the murder of Clinton Trezise, 22. Trezise was bashed to death with a shovel in Bunting's living room after being invited inside for a social visit. Bunting accused Tresize of being a pedophile and referred to him in conversations after his murder as "Happy Pants". Trezise was found buried two years after his murder in a shallow grave on 16 August 1994 at Lower Light, South Australia. It would be another three years before Bunting would murder again.

Trezise's murder remained unsolved for some time and in 1997 he was the subject of two episodes of the Australian television show "". Bunting watched an episode of the show with Vlassakis and his mother. Bunting boasted to Vlassakis, "That's my handiwork" and revealed to Vlassakis that he had murdered Trezise while living at Waterloo Corner Rd, Salisbury, and that he disposed of Trezise's body in Lower Light with Wagner and Lane's assistance.

Ray Davies was an man who lived in a caravan behind the house of Suzanne Allen in Salisbury North. Davies, a former lover of Allen, became a target for murder after Allen made an accusation that Davies was a pedophile and had made sexual advances to her grandsons.

Davies was murdered by Bunting and Wagner in December, 1995 and was never reported missing. Bunting and Wagner were later seen cleaning Davies' caravan. They moved it to a house in nearby Elizabeth where it was painted and sold two months after Davies' murder. Bunting would continue to claim Davies' welfare payments.

Davies' body was later recovered by police buried in the backyard at the former home of Bunting in Waterloo Corner Road, Salisbury North.

Michael Gardiner was an openly gay man murdered by Bunting and Wagner in August, 1997. Gardiner shared a house with friends nearby.

Robert Wagner did not like Gardiner due to his open homosexuality.

After Gardiner's murder, Bunting would have Frederick Brooks call friends of Gardiner and impersonate him. Brooks would demand from them belongings such as Gardiner's wallet, saying Gardiner required it for identification purposes. Bunting wanted it to gain access to Gardiner's personal funds.

His body would be found by police stored in one of six drums in the bank vault in Snowtown. The body of Barry Lane was also located in the same barrel. One of Gardiner's feet had been been removed so the lid of the drum could be closed.

Lane was an open homosexual and crossdresser. Lane had previously been in a relationship with Robert Wagner from 1985 until 1996. The pair shared a house in Bingham Road, Salisbury North near the home of Bunting. Lane's relationship with Wagner commenced when Wagner was aged thirteen. He was last seen alive in October, 1997.

Bunting would often refer to Lane as being "dirty" and refer to him as a . On the day of his murder, Lane was forced by Bunting to call his mother where he abused her and told her he would be moving to and that he wanted nothing further to do with her.

Bunting had also learned of Lane telling others about the earlier murder of Clinton Tresize. Lane had assisted Bunting to conceal Tresize's body. After Lane's murder, Bunting assumed control of Lane's vehicle and claim his welfare payments after his murder. Thomas Trevilyan was also involved in the murder of Lane. It was alleged Bunting only associated with Lane to gain further information about pedophiles in the area.

Lane's dismembered body would be found by police stored in a drum in the bank vault in Snowtown, along with the body of Michael Gardiner.

Thomas Trevilyan was described as having psychiatric problems and wore only army style clothing. He would at times run outside his house with a knife if he heard unfamiliar noises, and was known to regularly travel long distances on foot. He shared a house with Barry Lane for a period of five months from April to October 1997.

Bunting would tell others that Trevilyan had started to "fuck up" and "go mental" and that he would be a risk, exposing their crimes to others. Trevilyan was driven to Kersbrook by Bunting and Wagner. He was forced to stand on a box while a was fastened around his neck and the box kicked from under him.

Trevilyan's body was found in the on 5 November 1997. Police initially treated Trevilyan's death as a suicide.

Gavin Porter, 31, was a friend of Vlassakis from Victoria. He moved into the house shared by Bunting and Vlassakis in 1988. Porter was a frequent user and addict and Bunting referred to Porter a "waste", saying that Porter was wasting his life and no longer deserved to live.

Bunting was pricked by a used discarded by Porter on the lounge. Porter was murdered by Bunting and Wagner while sleeping in his car in the driveway of Bunting's house after working on his car. Porter's body was stored in a barrel before being moved to Snowtown.

Garry O'Dwyer was an intellectually disabled man who lived alone in Frances Street, Murray Bridge. His disabilities arose from a car accident earlier in life. Bunting had Vlassakis learn personal information about O'Dwyer and whether he had any family. O'Dwyer was seen by Bunting as an easy target and murdered so Bunting could gain from O'Dwyer's welfare payments.

O'Dwyer's body was found by police in the bank vault in Snowtown. His body contained burn marks which were inflicted by Bunting and Wagner using a machine to apply s.

Troy Youde was a half brother of Vlassakis, who had earlier confided to Bunting that Youde had molested him when younger. In August 1998, Bunting, Wagner, Vlassakis and Haydon visited Youde and dragged him from his bed and murdered him.

Youde's body was dismembered and stored in a barrel and later moved to Snowtown.

Frederick Brooks was the intellectually disabled son of Jodie Elliot, sister of Elizabeth Haydon. He was murdered by Bunting and Wagner on 17 September 1998.

Brook's body was moved to a car which was later collected by Mark Haydon. The body was later located by police in the disused bank vault in Snowtown. Mark Haydon would continue to access the welfare payments of Brooks.

Elizabeth Haydon was the wife of Mark Haydon, and shared a house with him at Blackham Crescent, Smithfield Plains, a northern suburb of Adelaide. Elizabeth's sister, Jodie Elliot, who had a brief relationship with Bunting in 1998, lived at the rear of the Haydon's house. Elizabeth would become Bunting and Wagner's second last murder victim and the only female murdered.

Elizabeth was murdered on 20 November 1998 while Haydon and Elliot were away from the house. Elizabeth was reported missing by her brother Garion Sinclair to police at 3pm the following day. Haydon would later assist in concealing his wife's murder.

Police inquiries into Elizabeth Haydon's disappearance, which led them to the disused bank in Snowtown, would eventually lead to the discovery of eight bodies stored in a vault, including that of Elizabeth Haydon. Police would later arrest Bunting, Wagner, Vlassakis and Elizabeth's husband, Mark Haydon for the murders.

Johnson was lured to the disused bank in Snowtown by his step-brother, James Vlassakis on 9 May 1999. Johnson was not homosexual, however Bunting would often refer to him as a "faggot" and saying he needed to die, disliking him from the day they met.

Vlassakis had earlier told Johnson about a computer near and that he would like Johnson to take a look at. Vlassakis drove Johnson to the bank vault in Snowtown, where he would become the final murder victim before the group was apprehended.

Shortly after Johnson entered the bank building, he was grabbed by Wagner around the throat and strangled. Wagner then applied handcuffs to Johnson and he was forced by Bunting to read a script Bunting had earlier prepared, as well as provide his bank account pin numbers. Johnson's voice was recorded on a nearby computer equipped with a microphone.

Wagner and Vlassakis drove to and attempted to access Johnson's bank account, leaving Bunting, Haydon and Johnson inside the bank. They were unsuccessful in accessing funds from Johnson's account. When they returned to the bank, Johnson was dead.

Bunting and Wagner dismembered Johnson's body, then fried and ate parts of his flesh.

Bunting was tried together with Robert Wagner. On 8 September 2003, Bunting was found guilty and convicted on eleven counts of murder, becoming Australia's most prolific serial killer.

The remains of Suzanne Allen were found buried at Bunting's house at Salisbury North, wrapped in eleven different plastic bags. Her death was concealed by the accused and they continued to collect her pension claiming a total of $17,000. They claimed she had died of a heart attack. Murder charges regarding the death of Allen were eventually dropped by the prosecution due to lack of evidence.