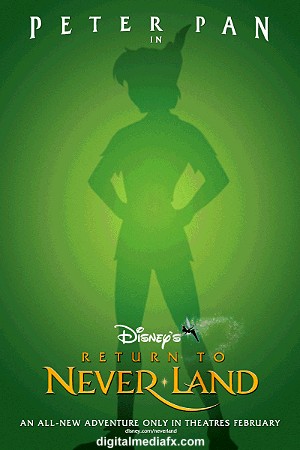 The story begins in , during the Blitz. Peter Pan's former playmate has grown up and married, and has two children of her own: a 11-year-old daughter Jane, and a 4-year-old son Danny. Her husband Edward is sent to fight in the war, leaving her to raise the children by herself. She tries to keep their spirits up with stories of Peter Pan, but Jane has nevertheless become cynical under the pressures of war, belittling the stories her mother tells and ridiculing her brother's faith in them.

, who has sailed through the skies on his pixie-dust-enchanted pirate ship, finds her sleeping by the window, and &ndash; thinking she is Wendy &ndash; abducts her to use in a scheme to defeat Peter Pan. However his ship triggers an alarm and is mistaken for an airplane and Hook has to escape for his life as the Germans attack London. Back in Neverland, he drops the girl into the waiting tentacles of a giant octopus, expecting Peter to also be devoured by it as he dives after "Wendy" to save her.

Peter rescues Jane, and upon finding she is Wendy's daughter, assumes she would like to follow in her mother's footsteps. He takes her to his home to be mother to the Lost Boys, but Jane can't stand or the rowdy gang of boys. They try to make her have fun and to teach her to fly, but she fails because she doesn't believe. She blurts out that she doesn't even believe in fairies, which leaves slowly dying.

Jane leaves them, and is approached by Hook, who tricks her with a deal. He promises to take her home and lies that he won't harm Peter, and she agrees to help him find his treasure. He gives Jane a whistle to signal him when she locates it. She returns to the Lost Boys to play a game of "treasure hunt", and they try to win her into becoming one of them, so she'll believe in fairies and restore Tink's health. When Jane finds the treasure, she throws Hook's whistle away, but Tootles finds it and blows it. Hook and crew arrive, capture Peter Pan and the Lost Boys, but let Jane go as thanks for "helping" them.

Back at the Boys' home, Jane finds Tinker Bell on the verge of death, but heals her. She and Tinker Bell hurry to the "Jolly Roger", where they find Peter walking the plank. Jane saves him, and with the help of "faith, trust, and pixie dust" learns to fly. Hook grabs Jane, and Peter saves her, also sinking the ship. Hook and the pirates exit via a rowboat, pursued by the giant octopus.

Now that she can fly, Jane is able to return home to Wendy and Danny; Peter and Tink escort her. Peter and Wendy are briefly reunited, and he is displeased that she's grown up, but she assures him that she hasn't really changed. Edward returns from the army, the family is reunited, and Peter Pan and Tinker Bell quietly fly home.

The final chapter of Barrie's "Peter and Wendy" briefly introduces Wendy as an adult, and her daughter Jane, serving as the premise for "Return to Never Land". Disney's Jane is modern: tomboyish and independent, and fully capable of taking care of herself; but Barrie's Jane plays the part of a new Wendy: motherly and domestic. In the film, Jane refuses to believe her mother's stories about Peter Pan, and is brought to Neverland by force (by Hook); in the book Jane is eager to believe in Peter Pan, and she meets and flies away with Peter much as Wendy did (but with her mother's knowledge and permission). Wendy's son Danny and husband Edward are new characters created for "Return to Never Land"; they are not in the novel.

The film is more properly a sequel to Disney's 1953 animated film rather than the novel, and reflects the ending of the film instead. For example, Captain Hook was not killed by the crocodile, and Tinker Bell has not died as explained by Barrie. In the novel, the Lost Boys returned to London with Wendy and grew up like normal children, but in "Return to Never Land" they have stayed as young as Peter Pan himself.

Because nearly five decades had passed since the original Disney film, a new cast of voice actors was used for this sequel. , who provided the voice of Wendy in the original, recorded all of the now-adult character's dialogue for "Return to Never Land", but Disney later had Kathie Soucie completely rerecord the role. [ [http://animated-views.com/2007/beaumont-and-kerry-leading-ladies/ Animated Views: Beaumont and Kerry: Peter Pan’s Leading Ladies] , interview with Kathryn Beaumont]

composed the score of "Return to Never Land".