Infobox Settlement
official_name = City of Rice, Minnesota
settlement_type =
nickname =
motto = A past with pride ... a future with promise 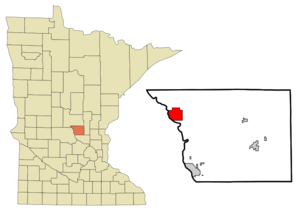 Rice is a city in Benton County, , . The population was 711 at the 2000 census. Its zip code also encompasses Graham, Langola, and Watab Townships.

Rice is part of the St. Cloud Metropolitan Statistical Area.

The Mississippi River is located west of Rice, and Little Rock Lake is located east.

serves as a main route in the community.

, as a farming community. [ [http://miva.sctimes.com/miva/cgi-bin/miva?Web/page.mv+5+DirGuides+Communities Communities] ]

In 1993, Rice was named a by The National Foundation.

Rice has been awarded the "Minnesota Star City" designation for economic development.

The system operates three elementary schools, one middle school, one high school, and has a District Office for Home School. Rice Elementary School is the only one of these schools located within the city of Rice. As with other Minnesota school systems, the Sauk Rapids-Rice Schools system has open enrollment. The athletic team for the middle and high school is the "Storm" [http://www.isd47.org/]

There were 247 households out of which 48.2% had children under the age of 18 living with them, 62.8% were married couples living together, 7.7% had a female householder with no husband present, and 25.1% were non-families. 19.4% of all households were made up of individuals and 4.9% had someone living alone who was 65 years of age or older. The average household size was 2.88 and the average family size was 3.35.