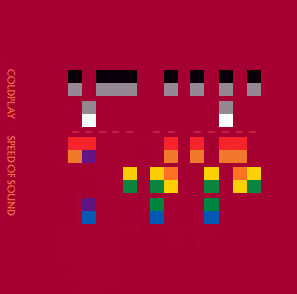 "Speed of Sound" is a song by English band . It was written by all members of the band for their third album, "". Built around a , the song builds into a huge, synth-heavy chorus. The song was released in the United States as the from "X&Y" and has reached number eight on the "Billboard" Hot 100. It was released in the United Kingdom on 23 May 2005, and has reached number one in the .

Although the song was recognized Song of the Year by the (ASCAP), the track received mixed reviews from critics. "Speed of Sound" was nominated twice at the . The song won a Brit Award in the category for Best British Single. The single's was nominated for four .

In an interview, revealed that the song was written in the summer of 2004 and was inspired by and Martin's daughter, Apple: "That's a song where we were listening to a lot of Kate Bush last summer, and we wanted a song which had a lot of tom-toms in it, as Martin explained, I just had my daughter up also, and was kind of feeling in a sense of awe and wonderment, so the song is kind of a Kate Bush song about miracles." [cite web|url=http://music.yahoo.com/read/news/19771811|title=Coldplay's 'Speed Of Sound' Inspired Partly By Fatherhood|accessdate=2008-08-29|date=2005-05-31|work= News|publisher="music.yahoo.com"|format=] The drumbeat of the song was inspired by Bush's song "". [cite web|url=http://www.xfm.co.uk/news/2005/coldplay-premiere-xy-in-nyc|title=Coldplay Premiere 'X&Y' In NYC|accessdate=2008-07-10|date=2005-05-19|work= News|Publisher="xfm.co.uk"|format=]

The lyrics in the song are cryptic; the ending lines of the third verse emphasize in belief and faith: "If you could see it then you’d understand/ah when you see it then you’ll understand," and "Some things you have to believe/others are puzzles puzzling me." [cite web|first=Kevin B.|last=Hendricks|url=http://www.planetwisdom.com/music/reviews/coldplay_speedofsound.php|title=Coldplay - Speed of Sound Review|accessdate=2008-08-29|publisher=Planet Wisdom] The fourth verse in the second verse alludes to discovering your place in the world: "How long am I gonna stand/with my head stuck under the sand," and "If you never try then you’ll never know". [cite web|url=http://www.mtv.com/lyrics/coldplay/speed_of_sound/8193393/lyrics.jhtml|title=Speed of Sound Lyrics|accessdate=2008-08-29|work= Lyrics|publisher="mtv.com"|format=]

"Speed of Sound" was beaten to the number one spot on the by the "Axel F" by the ,

"Speed of Sound" fared to mixed reviews among critics. Pitchfork rated it 2.5/5, noting its melodic similarity to the band's earlier song "Clocks". [cite web|first=Charles|last=Goldsmith|url=http://www.bloomberg.com/apps/news?pid=10000102&sid=aNSIiF_tNIzU&refer=uk|title=Coldplay `X&Y' Album for EMI Tops U.K. Chart Amid Mixed Reviews|accessdate=2008-07-10|date=2005-06-13|work=Bloomberg|publisher="bloomberg.com"|format=] In the "" review of the album, critic also noted the similarity between "Speed of Sound" and "Clocks", in which he wrote: "'Speed of Sound', an appealing but not thrilling song (it sounds a bit like Rush of Blood's 'Clocks' but without the swagger)." [cite web|first=Kelefa|last=Sanneh|url=http://www.rollingstone.com/reviews/album/7372421/review/7373521/xy|title=X&Y Review|accessdate=2008-08-29|date=2005-06-16|work=|publisher="rollingstone.com"] Matt Freelove of "" magazine, however, wrote: "It certainly is a song that would have fit in well on the second album, in terms of the music, if not the lyrics, which include 'Where to, where do i go? If you never try then you'll never know'. Not the best lyric that Chris Martin has ever committed to paper. However, the single is still quite good, and it sounds beautiful, but I was expecting some impressive about-face by the band that sent the music in a different direction." [cite web|first=Matt|last=Freelove|url=http://blogcritics.org/archives/2005/05/12/231628.php|title=Review - Coldplay's New Single "Speed of Sound"|accessdate=2008-08-29|date=2005-05-12|work=|publisher="blogcritics.org"] Joe Tangari of Pitchfork Media wrote: "The track's vocal melody outperforms the one from 'Clocks' by a hair." Nick Southall of "Stylus" magazine wrote: "First single 'Speed Of Sound' point [s] towards a luscious, technologically aware, synth-driven aesthetic, any development is purely superficial [...] 'Speed Of Sound' further cement [s] the futurist aesthetic; shiny, clean, gargantuan attention to detail, avoidance of real pain and passion in favour of anaesthetised but delicious and hollow melancholy and awe." [cite web|first=Joe|last=Tangari|url=http://www.stylusmagazine.com/reviews/coldplay/x-y.htm|title=Coldplay - X&Y - Review|accessdate=2008-08-29|date=2005-06-07|work=Stylus|publisher="stylusmagazine.com"]

The video opens in pitch-black, followed by a light framing Martin as he reaches skyward out of the shadows. The scene then shifts to the band, as they play the song. When Martin spread his hands, the two-story-high LED lights erupt in a colour of rainbow hues. The LED background changes its colours as the band proceeds with performing the song. The video concludes its ending with the band lined up, one-by-one, and the LED set displaying a white light background.