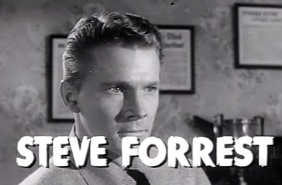 Steve Forrest (born William Forrest Andrews on , in ) is an American actor and a younger brother of actor .

Among his notable roles are in the films "", "The Longest Day", "", and "". Television roles have included the British crime series "" (1965-1966), "S.W.A.T.", "" and "Dallas", in which he played an pretending to be . Gunsmoke fans will remember Forrest as perhaps the only man to ever gun down Matt Dillon in the episode Mannon. Dillon survived to later shoot Mannon.

Forrest has been married to Christine Carilas since 1949; they have three sons.