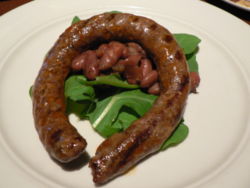 /mɛərˈɡɛz/) is a red, spicy mutton- or beef-based fresh sausage in North African cuisine. It is also popular in the Middle East, and Europe.

Merguez is a fresh sausage made with lamb, beef, or a mixture stuffed into a lamb-intestine casing. It is heavily spiced with chili pepper or harissa, which gives it its characteristic piquancy and red color, as well as other spices such as sumac, fennel, and garlic.

Merguez is usually eaten grilled or with couscous. Dried merguez is used to add flavor to tagines. It is also eaten in sandwiches and with french fries. In certain areas of Germany close to the border to France, it is often grilled on a Schwenker.

The etymology of merguez is unclear. It may be from a Berber word amergaz "sausage". It is probably not an Arabic word, and its spelling in Arabic has historically varied between mīrkās and mīrqās, probably because Arabic has no letter for the sound /g/, although Moroccan Arabic does have a /g/ sound. It may be a borrowing from Latin via Muslim Spain.[1]