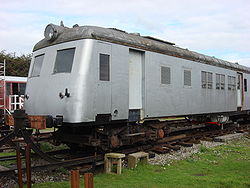 Advanced steam technology (sometimes known as Modern Steam) reflects an approach to the technical development of the steam engine intended for a wider variety of applications than has recently been the case. Particular attention has been given to the long-term endemic problems that have led to the demise of steam power in a commercial environment; these include excessive pollution, maintenance costs, labour intensive operation, low power/weight ratio, and low overall thermal efficiency. This applies particularly to medium and small-scale installations where steam power has generally now been superseded by the internal combustion engine or by electrical power drawn from an electrical grid. The proposed steam engines may be for stationary, road, rail or marine use.

Although most references to "Modern Steam" apply to developments since the 1970s, certain aspects of advanced steam technology can be discerned throughout the 20th century, notably as regards automatic boiler control along with rapid steam raising from cold.

From 1922 Abner Doble developed an electro-mechanical system that reacted simultaneously to steam temperature and pressure, starting and stopping the feed pumps whilst igniting and cutting out the burner according to boiler pressure.[1] The contraflow monotube boiler had a working pressure of from 750 psi (5.17 MPa) to 1,200 psi (8.27 MPa) but contained so little water in circulation as to present no risk of explosion. This type of boiler was continuously developed in the USA, Britain and Germany throughout the 1930s and into the 1950s for use in cars, buses, trucks, railcars, shunting locomotives (US; switchers), a speedboat and a small aeroplane.

In the UK, Sentinel Waggon Works developed a vertical water-tube boiler running at 275 psi (1.90 MPa) which was used in road vehicles, shunting locomotives and railcars. Steam could be raised much more quickly than with a conventional locomotive boiler.

Postwar in the late 1940s and 1950s some designers worked on modernising steam locomotives. The Argentinian engineer Livio Dante Porta in the development of Stephensonian railway locomotives incorporating advanced steam technology was a precursor of the 'Modern Steam' movement from 1948.[2]:3-6 Where possible, Porta much preferred to design new locomotives, but more often in practice he was forced to radically update old ones to incorporate the new technology.

In Britain the SR Leader class of c1949 by Oliver Bulleid and the British Rail ‘Standard’ class steam locomotives of the 1950s by Robert Riddles, particularly the BR Standard Class 9F, were used to trial new steam locomotive design features, including the Franco-Crosti boiler. On moving to Ireland, Bulleid also designed CIÉ No. CC1 which had many novel features.

The Sir Biscoe Tritton Lecture, given by Roger Waller, of the DLM company [1] to the Institute of Mechanical Engineers in 2003[3] gives an idea of how these problems are being addressed. Waller refers mainly to some rack and pinion mountain railway locomotives that were newly built from 1992-98. They were developed for three companies in Switzerland and Austria, and continued to work on two of these lines as of 2008[update]. The new steam locomotives burn the same grade of light oil as their diesel counterparts, and all demonstrate the same advantages of ready availability and reduced labour cost; at the same time they have been shown to greatly reduce air and ground pollution. Their economic superiority has meant that they have largely replaced the diesel locomotives and railcars previously operating the line; additionally, steam locomotives are a tourist attraction.

A parallel line of development was the return to steam power of the old Lake Geneva paddle steamer Montreux that had been refitted with a diesel-electric engine in the 1960s [4]. Economic aims similar to those achieved with the rack locomotives were pursued through automatic control of the light-oil-fired boiler and remote control of the engine from the bridge, enabling the steamship to be operated by a crew of the same size as a motor ship.

All this can be summed up as follows on the basis of the DLM company prospectus[5]:

- To which may be added:

A power unit based on advanced steam technology burning hydrocarbon fuel will, like any heat engine using hydrocarbon fuel combustion, inevitably emit carbon dioxide, a long-lasting greenhouse gas. However, significant reductions, compared to other combustion technologies, of other pollutants such as CO and NOx are achievable by steam technology, which does not involve explosive combustion,[6] without the need for add-ons such as filters etc. or special preparation of fuel.

If renewable fuel such as wood or other biofuel is used then the system could be carbon neutral. The use of biofuel remains controversial; however, liquid biofuels are easier to manufacture for steam plant than for diesels as they do not demand the stringent fuel standards required to protect diesel injectors.

It has been proposed [7] that, given sufficient solar energy, silicon might be refined for use as a coal replacement for this type of engine.

In principle, combustion and power delivery of steam plant can be considered as separate stages. While high overall thermal efficiency may be difficult to achieve, largely due to the extra stage of generating a working fluid between combustion and power delivery attributable mainly to leakages and heat losses,[2]:54-61 the separation of the processes allows specific problems to be addressed at each stage without revising the whole system every time. For instance the boiler or steam generator can be adapted to use any heat source, whether obtained from solid, liquid or gaseous fuel, and can furthermore use waste heat; whatever the choice, it will have no direct effect on the design of the engine unit, as that only ever has to deal with steam.

This project mainly includes combined electrical generation and heating systems for private homes and small villages burning wood or bamboo chips. This is intended to replace 2-stroke donkey engines and small diesel power plants. Drastic reduction in noise level is one immediate benefit of a steam-powered small plant. Ted Pritchard, of Melbourne, Australia, was intensively developing this type of unit from 2002 until his death in 2007. The company Pritchard Power [2] stated in 2010 that they continue to develop the stationary S5000, and that a prototype had been built and was being tested, and designs were being refined for market ready products.[8]

Until 2006 a German company called Enginion was actively developing a Steamcell, a micro CHP unit about the size of a PC tower for domestic use. It seems that by 2008 it had merged with Berlin company AMOVIS.[9]

A similar unit is marketed by Powertherm,[10] a subsidiary of Spilling (see below)

Once again quiet operation is the immediate benefit sought in this field, a potential recognised by Ted Pritchard, but nothing of note has yet appeared.

During the first 1970s oil crisis, a number of investigations into steam technology were initiated by large automobile corporations although as the crisis died down, impetus was soon lost.

Ted Pritchard's[13] main field of research from the late 1950s through the Sixties and into the Seventies was the building of several efficient steam power units working on the uniflow system adapted to a small truck and two cars. One of the cars was achieving the lowest emissions figures of that time.

IAV, a Berlin-based R&D company that later developed the Steamcell, during the 1990s was working on the single-cylinder ZEE (Zero Emissions Engine), followed by the compact 3-cylinder EZEE (Equal-to-Zero-Emissions-Engine)[14] designed to fit under the bonnet (US hood) of a Škoda Fabia small family saloon. All these engines made heavy use of non-flaming ceramic heat cells both for the steam generator and at strategic boost points where steam was injected into the cylinder(s).

Both 52 8055 and the proposed 5AT are of conventional layout, with the cab at the back, while the ACE 3000 had the cab located at the front. Other approaches are possible, especially with liquid fuel firing. For example:

Another proposal for advanced steam technology is to revive the fireless locomotive, which runs on stored steam independently pre-generated. An example is the Solar Steam Train project [18] in Sacramento, California.