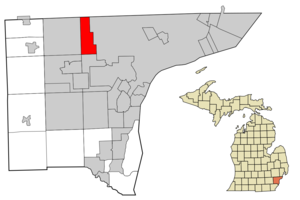 The township had initially been created as Richland Township by an act of the Michigan Territorial Legislature , , along with Lima Township out of Bucklin Township. However, the legislature overlooked legislation it had passed earlier on , , that prohibited the incorporation of any new township with the same name as any existing post office. Governor returned the acts unapproved, citing a conflict under the law. The legislature thus had to substitute the names of Nankin Township and Pekin Township after the cities of Nanking and Peking in . The name Pekin was changed to Redford in 1833. The name Redford was chosen because French fur trappers forded the River Rouge in the same area as Redford. Thus, the name Rouge-"Red"-Ford.

Redford Township, Michigan is a western Detroit suburb. According to the , the township has a total area of 11.2 s (29.1 ), all land. The upper River Rouge flows through the Lola Valley Park in the township.

The U.S. Census Bureau has also defined Redford Township as a (CDP) in the 2000 Census so that the community would appear on the list of places (like cities and villages) as well on the list of county subdivisions (like other townships). The final statistics for the township and the CDP are identical.

*Folk musician and songwriter ' song "Redford (For Yia-Yia & Pappou)," which appeared on his 2003 album "Michigan", mutely chronicles Stevens' childhood experiences in Redford Township, where his grandparents lived
*In the 1950s and 1960's Redford Township's population approached 80,000 people making it the largest township in the world.

Redford is twinned with