Dexter is a village in Washtenaw County in the U.S. state of Michigan. The majority of the village is in the northwest corner of Scio Township with a small portion (approximately 200 homes) in Webster Township. The population was 4,067 at the 2010 census. There is no political connection between the Village of Dexter and the nearby Township of Dexter, which is located to the northwest of the municipality. The township was named for Judge Samuel William Dexter, but he named the village for his father Samuel Dexter, the early American statesman.[3] In 1824 Samuel W. Dexter became the first person to purchase land in what is now Dexter village.

Dexter is the birthplace of biologist, women's suffragette, and philanthropist Katharine Dexter McCormick and Dr. Royal S. Copeland, US Senator from New York. 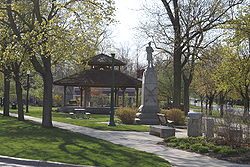 The area was first settled in 1824, 13 years before Michigan became a state, when land speculator Samuel W. Dexter purchased a large tract of land and originated the village. It was known as "Mill Creek Settlement" until the Village was platted in 1830 and the name officially changed to Dexter.

The nearby Mill Creek and Huron River have long been valuable resources to Dexter. A sawmill was built in 1827, a woolen mill in 1838, a grist mill in 1844, and a cider mill in 1886. After being appointed County Court Justice in 1826, Judge Dexter reportedly established a post office in his home shuttling mail between there and Ann Arbor on horseback.

The village founder Samuel W. Dexter served as the chief justice of the Washtenaw County Court as well as being elected a University of Michigan Regent. His home just southwest of the village overlooking the Huron River was built in the early 1840s in Greek Revival architecture and is a recognizable landmark in the area. Samuel Dexter called it Gordon Hall to honor his mother's family. It and 70 acres (280,000 m2) of surrounding property was gifted to the University of Michigan in 1950 by Katherine Dexter McCormick. It is said that Gordon Hall served as a refuge for slaves on the Underground Railroad.

According to the United States Census Bureau, the village has a total area of 1.9 square miles (4.9 km2). None of this area is covered by water.

The Border-to-Border Trail is planned to link Dexter to Hudson Mills Metropark and Dexter-Huron Metropark.[4][5][6]

There were 1,013 households of which 34.5% had children under the age of 18 living with them, 46.6% were married couples living together, 13.2% had a female householder with no husband present, and 36.7% were non-families. 32.3% of all households were made up of individuals and 9.0% had someone living alone who was 65 years of age or older The average household size was 2.31 and the average family size was 2.92.

The Dexter Leader is a weekly newspaper that covers events in Washtenaw County, including Dexter. 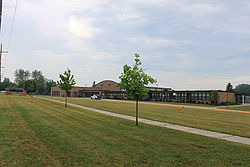