Charles Phelps Taft II (September 20, 1897 - June 24, 1983) was a U.S. Republican Party politician and member of the Taft family. From 1955 to 1957, he served as Mayor of Cincinnati, Ohio. Like other members of his family, Taft was a Republican for the purposes of state-wide elections. However, when running for municipal office in Cincinnati, Taft was a member of the Charter Party. During his term as mayor, Fortune magazine ranked Cincinnati as the best managed big city in the United States. As mayor, he gained the nickname "Mr. Cincinnati". 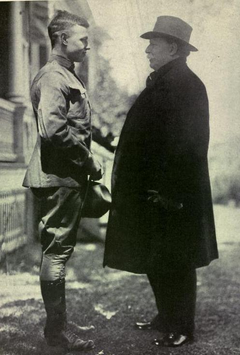 Charles Phelps Taft II with his father, William Howard Taft, before leaving for World War I.

Charles Phelps Taft was born in Cincinnati, Ohio, and was the son of President William Howard Taft and First Lady Helen Herron Taft, and the younger brother of U.S. Senator Robert Taft, and Bryn Mawr College professor Helen Taft Manning. He was named after his uncle, U.S. Congressman Charles Phelps Taft. He was only 11 years old when he moved to the White House, upon his father's election as President. During his father's tenure as Secretary of War, he was a frequent playmate of President Theodore Roosevelt's children. On the morning of May 17, 1909, the same day his mother suffered a severe stroke, he underwent a "bloody adenoid operation."[1] He dropped out of Yale University in order to serve in the United States Army during World War I and later returned to graduate in 1918, and then earned his law degree from Yale Law School in 1921. He was a 1918 initiate into the Skull and Bones Society.[2]

Upon graduation from law school, Taft practiced law and became active in Cincinnati local politics. In 1925, he helped introduce the home-rule charter under which, Cincinnati became the first major city in the United States to adopt the City Manager form of government. Later that year, he became the youngest President of the International YMCA. In 1926, he and his brother Robert Taft helped form the Cincinnati law firm Taft, Stettinius, and Hollister. From 1927 to 1928, he served as Hamilton County Prosecutor. He served on the Cincinnati City Council three times, from 1938 to 1942, from 1948 to 1951, and from 1955 to 1977. During World War II, he served as Director of U.S. Community War Service at the Federal Security Agency and later as Director of Economic Affairs at the State Department, under President Franklin D. Roosevelt. From 1947 to 1948, he served as the first layman President of the Federal Council of the Churches of Christ in America. In 1952, he ran unsuccessfully for Governor of Ohio, losing to incumbent Frank J. Lausche.

He was an avid fan of the Cincinnati Reds baseball team and sometimes listened to games on the radio with an earplug during city council meetings. In addition, he was an avid fisherman whose trademark was a canoe tied to his car in anticipation of his next fishing trip. When he died, the epitaph "Gone fishing" was inscribed on his grave at Spring Grove Cemetery in Cincinnati.

In his later years he spent much time preserving his father's childhood home, which became the William Howard Taft National Historic Site.