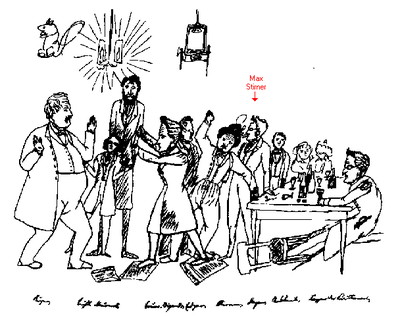 Die Freien was a 19th century circle of political philosophers in Germany, gathering for informal discussion over a period of a few years.

Die Freien was the name given to the Berlin wing of the Young Hegelians, headed by Bruno Bauer.

The group was formed at the University of Berlin. Its leader, Bruno Bauer was a student who had attended Hegel’s lectures and was then asked to defend the position of the Old Hegelians against the claims of Strauss’s Life of Jesus. After reviewing the book however, Bauer was converted and became even more radical than Strauss, becoming an atheist and arguing that Christianity was not only historically baseless, but was also irrational and a barrier to progress.

Later in his life he would disassociate himself from the group.

Attendees included Max Stirner, Bruno Bauer, Arnold Ruge, Friedrich Engels, and Karl Marx, among others. Although not much is known about the group, with John Henry Mackay's biography of Max Stirner appearing to be the most authoritative source, involvement appears to have been a formative period for Marx and Engels (who wrote The Manifesto Of The Communist Party, Wage-Labour and Capital and The German Ideology shortly after involvement) and Stirner (who wrote The Ego And Its Own around the same time). Consequently, the overall influence of the group to modern political thought can be considered monumental. As a cartoon by Engels shows, their small meetings were also attended by a "secret policeman", reporting on their activities to the authorities. The members of Die Freien held widely diverging views, and met for the purpose of debate; they did not represent a unified political or ideological outlook, though most of them have subsequently been seen as Young Hegelians.

They usually met at Hippel's Wine Bar in central Berlin. According to John Henry Mackay's biography of Max Stirner, they were well known for using foul language, at one point resulting in Arnold Ruge chastising them before storming out. Reportedly there were many women involved with the group, although information only survives for Stirner's second wife, Marie Dähnhardt. Moreover, after the owner stopped lending them money to drink, they resorted to jokingly begging on the street. However, Mackay claims that they drank little and drunkenness was uncommon.

The Young Hegelians, or the Left Hegelians, were a group of followers of Hegelian philosophy. They differed from the Old Hegelians, or the Right Hegelians, in that the latter were orthodox followers who strived to keep Hegel’s philosophy intact. The Young Hegelians, in contrast, while adopting the main elements of the philosophy, such as the dialectic approach, were highly critical of others. Marx for instance would not accept that the state was the seat of universality and rationality, i.e. that it was inherently rational, and made it his goal to prove that the difference between civil society, which Hegel held to be the sphere where individual interest is pursued in conflict with the interests of others, and the state, where such conflicts are transcended, was in fact misplaced, the goal of the proletariat being in fact to abolish such differences.

Other Young Hegelians had other qualms about Hegel’s Philosophy: David Strauss did not accept Hegel’s claims of Christian historicity renouncing any historical basis to Christianity in favour of its demythization, claiming that the stories found in the Bible should be understood as myths "constructed not by individuals but by the earliest Christian communities in response to the teaching of Christ and the Messianic tradition which they had inherited from the Old Testament.".[1]