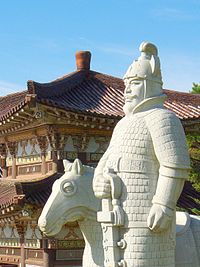 King Dongmyeong of Goguryeo (58 BC – 19 BC, r. 37 BC – 19 BC) or Dongmyeongseongwang (東明聖王), which literally means "Holy King of the East". also known by his birth name Jumong, was the founding monarch of Goguryeo, the northernmost of the Three Kingdoms of Korea. In the Gwanggaeto Stele, he is called Chumo-wang (King Chumo). In the Samguk Sagi and the Samguk Yusa, he is recorded as Jumong, with the surname Go. The Samguk Sagi states that he was also known as Chumo or Sanghae (상해, 象解). The name is also transcribed in other records as Chumong (추몽, 鄒蒙), Jungmo (중모, 中牟 or 仲牟), or Domo (도모, 都牟).[1]

The founding myths of Goguryeo are related in ancient Korean texts, including the Gwanggaeto stele. The best known version is found, with slight variations, in the Samguk Sagi, Samguk Yusa, and the Dongmyeongwangpyeon (동명왕편, 東明王篇, Volume of King Dongmyeong) of the Dongguk I sangguk jip (동국이상국집, 東國李相國集, Collected Works of Minister Yi of Korea) by Yi Gyu-bo.

There have been disputes over who the father of Jumong really was. In one legend Jumong is son of Hae Mosu (해모수, 解慕漱) and Yuhwa (유화, 柳花), daughter of the river god named Habaek (하백, 河伯). Hae Mosu met Yuhwa by a river where she was bathing, but the river god disapproved of Hae Mosu, who returned to heaven. The river god chased Yuhwa away to Ubal river (우발수, 優渤水), where she met and became the concubine of King Geumwa of Dongbuyeo. Yuwha was impregnated by sunlight and gave birth to an egg.[2] Geumwa tried to destroy the egg, and tried to feed it to animals, who instead protected the egg from harm. Geumwa returned it to Yuhwa. From the egg hatched a baby boy, who was named Jumong, apparently meaning "skilled archer" in the ancient Buyeo language.

Jumong was known for his exceptional skill at archery. Eventually, Geumwa's sons Daesoo and youngpoo became jealous of him, and Jumong left buyeo due to follow Hae-moe-soo's dream to unify old choson territoy due to Han's nations corrupt government and save the choson's people he left Dongbuyeo. According to legend, as he fled on his horse, he approached a fast-running river. Turtles and creatures of the water rose up and formed a bridge.[3] He entered the land south of the river. In 37 BC, Jumong became the first king of Goguryeo, and reunited all of the five tribes of Jolbon into one kingdom. He married So Seo-no, who was a daughter of Jolbon's chief.

The first King of Goguryeo

In 37 BC, Jumong established Goguryeo, and became its first king. During that same year, King Songyang of Biryu (송양, 松讓) surrendered to him after receiving assistance in defeating the Malgal tribe that had invaded. In 34 BC, Jolbon, Goguryeo's first capital city, was completed, along with the palace. Four years later, in 28 BC, Jumong sent General Bu Wiyeom (부위염, 扶尉厭) to conquer the Northern Okjeo.[4] [5] During that same year, Jumong's mother, Yuhwa, died in the palace of Dongbuyeo, and was given the burial ceremony of a Royal Queen even though she was a concubine (she was not a Royal Wife).

Jumong sent a messenger and numerous gifts to King Geumwa in gratitude of his generous act. In 19 BC, Jumong's first wife Lady Ye fled Dongbuyeo with their son, Yuri, and entered Goguryeo.[6] Ye became the queen, causing tension as Jumong's second wife, So Seo-no, feared for her sons' positions in the future of Goguryeo. So Seo-no left Goguryeo with her two sons and some of the people and headed further south into the Korean peninsula, into what is now South Korea. There she built Baekje. Jumong named his first son Yuri as the crown prince and successor to the throne.

Jumong died in 19 BC at the age of 40.[7] Crown Prince Yuri buried his father in a pyramid tomb, and gave him the posthumous name of Chumo-seongwang.

Jumong's kingdom of Goguryeo eventually grew into a great regional power. Goguryeo stood for 705 years and was ruled by a total of 28 kings in the Go Royal Family until it was conquered by the Silla-Tang alliance in 668. Balhae and Goryeo succeeded it, and the modern descendants of Jumong still bear his family name "Go."

In 2006-2007, the South Korean television network MBC aired a highly popular 81-episode drama, Jumong as part of their anniversary project. The series took elements from historical records and mythology, and retold the story in a more down-to-earth manner than the myths, following how Ju Mong, the spoiled step-child of the Buyeo royal family, later embarked a journey of self-discovery, becoming a hero of Buyeo, then seceding from Buyeo after his step-brothers betrayed him, restarted the guerrilla fighters his biological father once lead, and went on a life-mission to rescue and band together the refugees of the ancient Chosen people, leading the fight against the oppression of Imperial China, finally establishing himself as the king of the new nation Goguryeo.

In 2010, KBS1 began airing 'King Geunchogo'. In this series, Jumong is portrayed as a tyrant, who could not accept him sharing his kingdom, Goguryeo, with So Seo-no and the Jolbon faction. After the arrival of the declared crown prince Yuri, So Seo-no decides to leave 'her beloved Goguryeo' with all her servants and to create a new kingdom, one 'much more powerful than Goguryeo ever was'.