Port Huron is a city in the U.S. state of Michigan and the county seat of St. Clair County.[3] The population was 32,338 at the 2000 census. The city is adjacent to Port Huron Township but is administratively autonomous. It is joined by the Blue Water Bridge over the St. Clair River to Sarnia, Ontario in Canada. The city lies at the southern end of Lake Huron and is the easternmost point on land in Michigan. Port Huron is home to a Domtar Paper Mill; Mueller Industries; Henkel and many companies related to the automobile industry. The city also features a historic downtown area, boardwalk, marina, museum, lighthouse, and the McMorran Place arena and entertainment complex.

The city was a recipient of the All-America City Award in 2005.

In 1814, Fort Gratiot was established at the base of Lake Huron and was considered the first Euro-American population in the area. There was a Ojibwa reservation in part of the modern area of Port Huron until 1836.[4]

On Sunday, October 8, 1871, the city, as well as places north in Sanilac, and Huron County, burned in the Port Huron Fire of 1871. The Thumb Fire occurred a decade later, covering almost the same area. A series of other fires leveled Holland and Manistee, Michigan, as well as Peshtigo, Wisconsin and Chicago on the same day.

The following historic sites have been recognized by the State of Michigan through its historic marker program.

In 1962, a convention of the Students for a Democratic Society was held in Lakeport a community several miles north of the city. While there they developed the Port Huron Statement, the SDS manifesto.

Port Huron is the largest city in the Thumb area, and is a center of industry and trade for the region.

The city government is organized under a council/manager form of government. The City Council is responsible for appointing a City Manager, who is the Chief Administrative Officer of the city. The Manager supervises the administrative affairs of the city and carries out the policies established by the City Council. As the Chief Administrative Officer, the City Manager is responsible for the organization of the administrative branch and has the power to appoint and remove administrative officers who are responsible for the operation of departments which carry out specific functions. The City Council consists of seven elected officials—a mayor and six council members. Beginning with the 2011 election, citizens will vote separately for Mayor and Council. Council members will serve staggered four-year terms and the Mayor will serve a two year term. The current mayor is former city clerk, Pauline Repp. 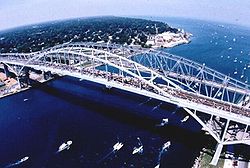 Two Interstates terminate at the Port Huron-to-Sarnia Blue Water Bridge, and they meet The 402.

The Blue Water Area Transit system,[6] created in 1976, includes eight routes in the Port Huron area. Blue Water Transit operates the Blue Water Trolley, which provides a one hour tour of various local points of interest. Recently, Blue Water Area Transit received a grant from the state to buy new buses for a route between the Port Huron hub and New Baltimore about 30 miles (48 km) south. Commuters could take an express bus traveling down I-94 and get off at the 23 Mile Road SMART Bus stop. At the same time, another bus will travel down M-25 and M-29 and pick up commuters in Marysville, Saint Clair and Algonac before ending up at the same stop on 23-mile (37 km) road. This new system will help people in St. Clair County travel through Metro Detroit. 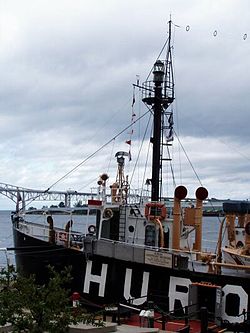 The thumb area is an unranked radio region. Local radio in Port Huron includes WPHM AM, WBTI FM, WHLS AM, WSAQ FM, and WGRT. Most Detroit radio stations can be heard in the Port Huron area.

St. Clair County lies in the Detroit television market. Channels available on Comcast are as follows:

Port Huron has had a strong tradition of minor league hockey for many years.

The Port Huron Flags played in the original International Hockey League from 1962-1981, winning three Turner Cup championships in 1966, 1971 and 1972. Its leading career scorers were Ken Gribbons, who played most of his career in the IHL; Bob McCammon, a lifelong IHLer who went on to be a National Hockey League coach with the Philadelphia Flyers and the Vancouver Canucks; Bill LeCaine and Larry Gould, who played a handful of NHL games with the Pittsburgh Penguins and the Vancouver Canucks, respectively.

Port Huron was also represented in the Colonial Hockey League (also operating under the names United Hockey League and International Hockey League), with franchises from 1996 until the league folded in 2010. Originally called the Border Cats, the team was renamed the Beacons in 2002, the Flags in 2005 and the Icehawks in 2007. Among the more notable players were Bob McKillop, Jason Firth, Tab Lardner and Brent Gretzky.