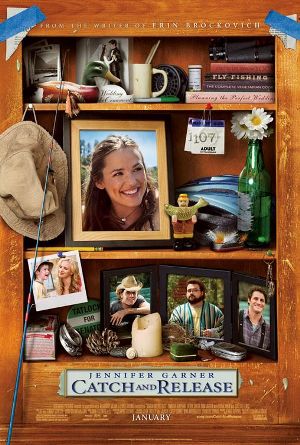 "Catch and Release" is a released on , . It is the directorial debut of , who wrote the movie "Erin Brockovich". It stars as a woman mourning her fiance's death who finds a more than welcoming shoulder to cry on in his best friend. and filmmaker co-star. 's song "Nothing Left to Lose" is used in commercials for the movie.

The movie opens with Gray () at the funeral of her fiancé, Grady. They were supposed to be married that day, but due to an accident that happened during his weekend, he was killed. Gray is very upset and eventually seeks solace by hiding in the bathtub. Meanwhile, one of Grady's friends, Fritz (), has seduced one of the catering staff and takes her into the bathroom, not realizing that Gray is there. Gray is forced to listen to them have sex. Once the caterer leaves, she pulls back the shower curtain, startling Fritz.

Gray visits the attorney to determine what will happen to Grady's estate. Grady did not have a will and since he and Gray were not married, she will not inherit his money. The attorney reveals that Grady had an investment account with a million dollars in it, which Gray knew nothing about. She determines that she can no longer afford to rent the house that they had picked out and she was already living in. With help from Grady's friends Dennis () and Sam (), she puts her things into storage and moves in with them into Grady's old room. Fritz, who lives in L.A., is also staying in the house during his visit.

Tensions continue between Gray and Fritz, and Gray is further upset when Grady's mother asks for the engagement ring back. Gray refuses to answer her and keeps the ring. As Gray investigates Grady's investment account, she finds that every month, he transferred $3,000 out of the account.

During the night, a cell phone rings. Gray wakes up Fritz, thinking the phone is his. He says that it's not his and turns it off. At the same time, they realize that the phone must have belonged to Grady. Gray grabs the phone first and turns it on to find ten voicemail messages. She listens to a string of messages from a woman who goes from cautiously concerned to increasingly angry as each message progresses.

When Gray researches the phone number, she finds out that the area code is for L.A. She goes to Fritz for answers, and he reveals that Grady had a son with a woman he met in L.A. and that she depends on the money she received from him to support herself and their son. Fritz tells her that the boy is eight and that the encounter happened before she and Grady were involved.

Eventually, the other woman, Maureen () and her son turn up, trying to get answers about Grady and the money. When Gray encounters them, she realizes that the boy is four, not eight, and that the affair happened while she and Grady were together. Gray confronts Fritz about the revelation. She slaps him and he pins her arms against the wall. They kiss, but part and leave without a word.

Gray doesn't want anything to do with Maureen, but the guys are reluctant to send her away. They all spend time together and get to know each other. Sam and Maureen begin to develop a connection.

As Fritz and Gray continue to develop their relationship in secret, Dennis reveals that he has feelings for Gray. Gray lets him down easily, but he becomes furious when he finds that Gray and Fritz are an item. Gray tells Dennis that her relationship with Fritz is "less than nothing", not realizing that he is standing by the doorway and can hear her speaking. Fritz determines that Gray doesn't return his feelings for her and he returns to Malibu.

Grady's mother insists that the boy have a DNA test before inheriting Grady's money, as he stands to do under Colorado law. The results determine that Grady was not the father. Maureen is devastated, unsure how she will support her child without Grady's money. Gray goes to Grady's mother and tells her that she thinks that Grady must have known that the child wasn't his, but that his money could make a difference in the boy's life. She offers Grady's mother the engagement ring in exchange for her giving Grady's money to Maureen.

The group gathers at the dedication ceremony for the peace garden that Dennis has built to memorialize Grady. Grady's mother gives Maureen a certified check. When Gray finds out, she offers the ring back, but Grady's mother tells her to keep it. She says that she never cared about the ring or the money, she just wanted her son back.

Dennis decides it's time for him to be on his own, so he moves out of the house. Maureen and her son move in with Sam. Gray determines that she never fully knew Grady, but that she has come to have feelings for the one person that he (and she) could be herself around, Fritz.

At the end of the movie Gray goes to Malibu. She goes to Fritz's house and finds him outside at the beach playing fetch with his dog. She throws the ball and the dogs runs after it. Fritz turns around and sees her. She walks toward him and says she should have called then starts rambling on. He quiets her by kissing her and says, "What took you so long?" The film ends with Fritz's photographs rolling through the credits.

The original Film Score is produced by (BT) and .
Music featured in "Catch and Release" is performed by:

Box office prediction and analysis site Boxofficemojo.com pegged "Catch and Release" for a $4.6 million opening weekend at its 1,622 sites, with Leesmovieinfo.com estimating $5.0 million. The film edged above these expectations and grossed $7,658,898 in its first three days &mdash; with Sony indicating that 75% of the audience was female (with 58% being over 25). The pattern of films that rely heavily on its leading ladies having a dominantly female audience can also be seen in pictures like "", "Just Like Heaven" and "Because I Said So", other medium sized box office successes.

Critical reaction towards the movie has been largely negative. The ratings was at 22% and 29% for Cream of the Crop respectively. [cite web | url=http://www.rottentomatoes.com/m/catch_and_release/ | title=Catch and Release | publisher= | accessdate=2007-05-09 ] On the film had a slightly better 43, indicated as "Mixed or Average Reviews." [cite web | url=http://www.metacritic.com/film/titles/catchandrelease?q=catch%20and%20release | title=Catch and Release | publisher= | accessdate=2007-05-09 ] The film did receive "Two Thumbs Up" from Richard Roeper and guest critic Govindini Murty. Even with most of the reviews being negative, a number of critics praised the performance given by Kevin Smith [ [http://silentbobspeaks.com/?m=20070126 My Boring Ass Life » 2007 » January ] ] .