The Mohonk Mountain House also known as Lake Mohonk Mountain House, is a historic American resort hotel located on the Shawangunk Ridge in Ulster County, New York. Its prominent location in the town of New Paltz is just beyond the southern border of the Catskill Mountains on the western side of the Hudson River. Two important policy conferences of domestic and international significance have taken place at the hotel.

The historic resort is located on the shore of Lake Mohonk, which is half of a mile (800 m) long and 60 feet (18 m) deep. The main structure, which was designated a National Historic Landmark in 1986,[2] was built by Quaker twin brothers Albert and Alfred Smiley between 1879 and 1910. It has 266 guest rooms, including 28 tower rooms, an indoor pool and spa, and an outdoor ice-skating rink for winter use. The picturesque setting of the resort on the lake was once featured in an original picture print by Currier & Ives.

The property has been owned and operated by descendants of the Smiley brothers since 1869. It consists of 2,200 acres (890 ha) and much of it is landscaped with meadows and gardens. The property adjoins 6,400 acres (2,600 ha) of the Mohonk Preserve, which is crisscrossed by 85 miles (140 km) of hiking trails and carriage roads. The Smiley Family conveyed portions of their property into the Preserve; they have received awards for the stewardship of their land and their early environmental awareness. A reciprocal agreement allows Preserve members and day visitors to visit the resort grounds, and there is a network of well-maintained trails that visitors can follow in all seasons.

Both the original Smiley brothers were temperance advocates, and banned liquor, dancing and card playing on the premises. The hotel obtained a liquor license in the 1960s. [1]

Recreation and other activities 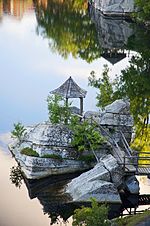 Resort guests may ride horses, go boating on the lake, play tennis, croquet, and shuffleboard, tour a historic barn and greenhouse, take carriage rides, swim or fish in the lake, receive spa treatments, visit the fitness center, play golf, listen to concerts and lectures, hike mountain trails, stroll through formal gardens and a maze, ride bikes, or go rock climbing. There is a gift shop that carries apparel, accessories, snacks, and beverages. Winter activities include snowshoeing, cross-country skiing, and ice-skating. Many of the recreational activities are provided as part of the room rate. The resort is open year-round.

There is a library in the main building; several books written by regular Mohonk guests are included in the collection. The hotel also has special rooms for viewing television and using the internet. Supervised children's activities are available for adults who want privacy or free time to explore the resort on their own.

All overnight guests at The Mohonk Mountain House are on the "Full American Plan." Three meals and afternoon tea are provided daily as part of the room rate. Guests checking into the resort are first offered tea and cookies in the late afternoon, followed by dinner, and breakfast the next morning. Check-out time is 2:00 p.m; lunch on the day of departure is included. Guests may substitute a pack lunch so that they can have a picnic after leaving the hotel. The main dining room provides guests with a view of the Catskill Mountains to the north. In the summer a lunch buffet is available at the outdoor "Granary" perched on a cliff overlooking Lake Mohonk. Day guests may make advance reservations to purchase meals in the hotel or to spend the day hiking in the hotel's grounds and the Mohonk Preserve.

From 1883 to 1916 annual conferences took place at Mohonk Mountain House, sponsored by Albert Smiley, to improve the living standards of native American Indian populations. These meetings brought together government representatives of the Bureau of Indian Affairs and the House and Senate committees on Indian Affairs, as well as educators, philanthropists, and Indian leaders to discuss the formulation of policy. The 22,000 records from the 34 conference reports are now at the library of Haverford College for researchers and students of American history.

The hotel also hosted the Lake Mohonk Conference on International Arbitration between 1895 and 1916, which was instrumental in creating the Permanent Court of Arbitration in The Hague, Netherlands. Those conference papers were donated by the Smiley Family to Swarthmore College for future research.

In recent years the Mohonk Mountain House has been featured on The Travel Channel's Great Hotels and Anthony Bourdain: No Reservations as well as the television program "America's Castles" on the A&E Network, among other programs. The resort was the setting of a 1994 feature film, The Road to Wellville, starring Anthony Hopkins and Matthew Broderick. The Mountain House was featured on The Today Show on September 28, 2006 for a teambuilding adventure for Meredith Vieira and Ann Curry.