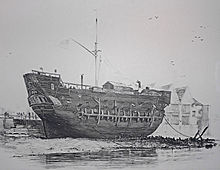 The forbidding form of the beached convict ship HMS Discovery at Deptford. Launched as a 10-gun sloop at Rotherhithe in 1789, the ship served as a convict hulk from 1818 until scrapped in February 1834.[1] 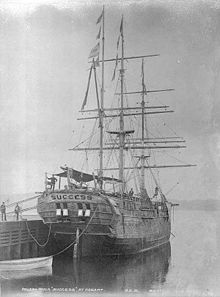 A prison ship, historically sometimes called a prison hulk, is a vessel used as a prison, often to hold convicts awaiting transportation to penal colonies. This practice was popular with the British government in the 18th and 19th centuries.

The vessels were a common form of internment in Britain and elsewhere in the 18th and 19th centuries. Charles F. Campbell writes that around 40 ships of the British Navy were converted for use as prison hulks.[3] Other hulks included HMS Warrior, which became a prison ship at Woolwich in February 1840,[4] One was established at Gibraltar, others at Bermuda, at Antigua, off Brooklyn in Wallabout Bay, and at Sheerness. Other hulks were anchored off Woolwich, Portsmouth, Chatham, Deptford, and Plymouth-Dock/Devonport.[5] Private companies owned and operated the hulks holding prisoners bound for penal transportation.

British use during the American War of Independence

During the American War of Independence, more Americans died as prisoners of war on British prison ships through intentional neglect than died in every battle of the war combined.[6][7][8][9][10][11][12][13][14] During the war, 11,500 men and women died due to overcrowding, contaminated water, starvation, and disease on prison ships anchored in the East River; the bodies of those who died were hastily buried along the shore.[15] This is now commemorated by the "Prison Ship Martyrs' Monument" in Fort Greene Park in New York City.[15] One such British ship during the War of Independence was the HMS Jersey.[10]

Christopher Vail, of Southold, who was aboard Jersey in 1781, later wrote:

'When a man died he was carried up on the forecastle and laid there until the next morning at 8 o'clock when they were all lowered down the ship sides by a rope round them in the same manner as tho' they were beasts. There was 8 died of a day while I was there. They were carried on shore in heaps and hove out the boat on the wharf, then taken across a hand barrow, carried to the edge of the bank, where a hole was dug 1 or 2 feet deep and all hove in together.'

In 1778, Robert Sheffield of Stonington, Connecticut, escaped from one of the prison ships, and told his story in the Connecticut Gazette, printed July 10, 1778. He was one of 350 prisoners held in a compartment below the decks.

"The heat was so intense that (the hot sun shining all day on deck) they were all naked, which also served the well to get rid of vermin, but the sick were eaten up alive. Their sickly countenances, and ghastly looks were truly horrible; some swearing and blaspheming; others crying, praying, and wringing their hands; and stalking about like ghosts; others delirious, raving and storming,--all panting for breath; some dead, and corrupting. The air was so foul that at times a lamp could not be kept burning, by reason of which the bodies were not missed until they had been dead ten days."[16]

British use in Napoleonic Wars 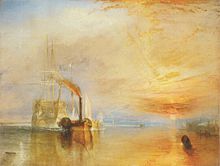 The Fighting Temeraire tugged to her last berth to be broken up by J. M. W. Turner, 1838.

A typical British hulk, the former man-of-war HMS Bellerophon, was decommissioned after the Battle of Trafalgar and became a prison ship in October 1815.[17] Anchored off Sheerness in England, and renamed HMS Captivity on 5 October 1824, she usually held about 480 convicts in woeful conditions[3] and HMS Discovery, which became a prison hulk in 1818[1] at Deptford.[18] Another famous prison ship was the HMS Temeraire which served from 1812–1815. The prison hulks housed prisoners of war and captured crews from French corsairs in horrific conditions of neglect, filth, disease, and starvation.[19] Maritime historians estimate that between 1803 and 1814, 12,845 imprisoned Frenchmen died in British prison hulks.[20]

British use in New South Wales

In New South Wales, Australia, hulks were also used as juvenile correctional centers. Vernon (1867–1892) and Sobraon (1892–1911) - the latter officially a "nautical school ship" - were anchored in Sydney Harbor. The commander of the two ships, Frederick Neitenstein (1850–1921), introduced a system of "discipline, surveillance, physical drill and a system of grading and marks. He aimed at creating a 'moral earthquake' in each new boy. Every new admission was placed in the lowest grade and, through hard work and obedience, gradually won a restricted number of privileges." [21]

List of decommissioned prison hulks of the British Empire

The Cap Arcona, a passenger liner, was converted by the Nazis to hold concentration camp-bound prisoners

Nazi Germany assembled a small fleet of ships in the Bay of Lübeck to hold concentration camp bound prisoners. These consisted of the passenger liners Cap Arcona and the SS Deutschland, and the vessels Thielbek and Athen. All were destroyed on May 3rd, 1945 by British aircraft, the inmates were either killed by bombing or strafing, burned alive on the ships who did not sink due to the low depth of the water at the anchorage or drowned while trying to reach the shore due to the water's low temperature of 8° C.

Reports from Amnesty International, the US Senate and Chilean Truth and Reconciliation Commission describe Esmeralda (BE-43) as a kind of a floating jail and torture chamber for political prisoners of the Augusto Pinochet regime from 1973 to 1980. It is claimed that probably over a hundred persons were kept there at times and subjected to hideous treatment,[1] among them the British priest Miguel Woodward.[22] 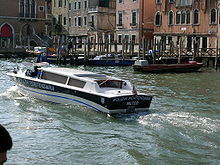 A prison police boat under way in Venice.

Venice uses boats to ferry convicted criminals around the city.

HMS Maidstone was used as a prison ship in Northern Ireland in the 1970s for suspected Nationalist paramilitaries and non-combatant activist supporters. The current president of the Nationalist political party Sinn Féin, Gerry Adams, spent time on the Maidstone in 1972. He was released in order to take part in peace talks.

In 1997, the United Kingdom Government established a new prison ship, HMP Weare, as a temporary measure to ease prison overcrowding. Weare was docked at the disused Royal Navy dockyard at Portland, Dorset. On 9 March 2005 it was announced that the Weare was to close. Since then, the government has advertised for a contractor to supply 800 prison ship spaces to alleviate overcrowding.[citation needed]

The Weare was used as a floating barracks during the Falklands war, and was subsequently purchased by the New York State Department of Correctional Services for use as a rehabilitation centre for those involved in drug crime.[citation needed] The Weare is a flat bottomed barge, and its superstructure consist of steel containers stacked on top of one another provide five levels of category C accommodation.[citation needed] It arrived in Portland Harbour on 13 March 1997, but there was no planning permission.[citation needed] The application had been rejected at the beginning of February mainly on the grounds that it would be a blight to tourism.[citation needed]

In 1987, Col. Gregorio Honasan, leader of various coup de etat in the Philippines was captured and was imprisoned in a navy ship temporarily converted to be his holding facility. However, he escaped after convincing the guards to join his cause.

In the United States, the Vernon C. Bain Correctional Center is a prison barge operated by the New York City Department of Correction as an adjunct facility to Rikers Island. However, it was built for this purpose rather than repurposed.

In June 2008 The Guardian printed claims by Reprieve that the US military is holding people arrested in the War on Terrorism on active navy ships, including the USS Bataan and Peleliu, although this was denied by the US Navy.[23]

In 2009 the U.S. Navy converted the main deck aboard the supply ship USNS Lewis and Clark into a brig to hold pirates captured off the coast of Somalia until they could be transferred to Kenya for prosecution. The brig was capable of holding up to twenty-six prisoners and was operated by a detachment of Marines from the 26th Marine Expeditionary Unit.[24][25][26]

In 2011 the United States admits to holding -- not just transporting -- terrorist suspects on ships at sea, and claims legal authority to do so, [27] despite the clear text of the Third Geneva Convention explicitly forbidding such use of ships: "Art 22. Prisoners of war may be interned only in premises located on land and affording every guarantee of hygiene and healthfulness." [28]

Around the Mediterranean, convicts and prisoners-of-war were used as oarsmen on galleys as late as the 19th century.[citation needed]

Charles Dickens' novel Great Expectations opens in 1812 with the escape of the convict Abel Magwitch from a hulk moored in the Thames Estuary. In fact, the prison ships were largely moored in the neighboring River Medway, but Dickens combined real elements to create fictional locations for his work.[citation needed]

In the early stages of Victor Hugo's novel Les Misérables, Jean Valjean is a convict on the galleys at Toulon in France.

French artist and author Ambroise Louis Garneray depicted his life on a prison hulk at Portsmouth in the memoir Mes Pontons.