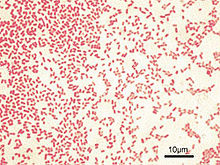 The pathogenic capability of Gram-negative bacteria is often associated with certain components of Gram-negative cell walls, in particular, the lipopolysaccharide layer (also known as LPS or endotoxin layer).[1] In humans, LPS triggers an innate immune response characterized by cytokine production and immune system activation. Inflammation is a common result of cytokine (from the Greek cyto, cell and kinesis, movement) production, which can also produce host toxicity. 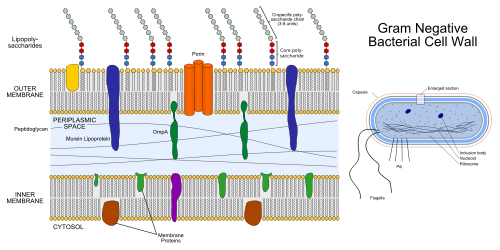 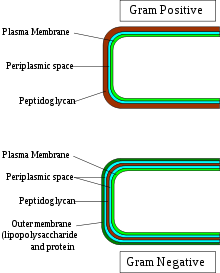 Gram-positive- and negative bacteria are chiefly differentiated by their cell wall structure.

The following characteristics are displayed by Gram-negative bacteria:

Along with cell shape, Gram staining is a rapid diagnostic tool and used to be used to group species at the subdivision of Bacteria.

In fact, historically the kindgom Monera was divided into four divisions based on Gram staining: Firmacutes [sic] (+), Gracillicutes (-), Mollicutes (0) and Mendocutes (var.).[2] Since 1987, the monophyly of the Gram-negative bacteria has been disproven with molecular studies.[3] However some authors, such as Cavalier-Smith still treat them as a monophyletic clade and refer to the group as subkindgom "Negibacteria".[4]

Gram-negative bacteria associated with nosocomial infections include Acinetobacter baumannii, which cause bacteremia, secondary meningitis, and ventilator-associated pneumonia in intensive-care units of hospital establishments.

One of the several unique characteristics of Gram-negative bacteria is the structure of the outer membrane. The outer leaflet of the membrane comprises a complex lipopolysaccharide whose lipid portion acts as an endotoxin. If endotoxin enters the circulatory system, it causes a toxic reaction, with the sufferer developing a high temperature, high respiration rate, and low blood pressure. This may lead to endotoxic shock, which may be fatal.

This outer membrane protects the bacteria from several antibiotics, dyes, and detergents that would normally damage the inner membrane or cell wall (peptidoglycan). The outer membrane provides these bacteria with resistance to lysozyme and penicillin. However, alternative medicinal treatments such as lysozyme with EDTA and the antibiotic ampicillin have been developed to combat the protective outer membrane of some pathogenic Gram-negative organisms. Other drugs can be used, significant ones being chloramphenicol, streptomycin, and nalidixic acid.