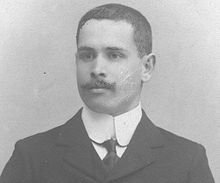 Clodoveo Carrión Mora (1883–1957) was a paleontologist and naturalist who is regarded as the most prolific and erudite natural scientist of Ecuador of the 20th century.

Clodoveo attended a catholic primary school La Salle and then a secular high school Colegio Bernardo Valdivieso. As a young man he recognised that he had no aptitude for the letters ---something rare in his family--- but rather for the natural sciences. In order to pursue his scientific education, Clodoveo traveled to Europe. He studied at the University of London and at the University of Manchester obtaining the title of Industrial Engineer. During his 10-year stay in Europe he also carried out many studies in Spain and France. He never married and was a very reserved person. Having been born into an affluent family of intellectuals and liberals certainly contributed to achieving his plans.

Upon returning from Europe, he became Professor of Natural Sciences at the Colegio Bernardo Valdivieso until his retirement. In 1924 he presented some of his findings to the Panamerican Scientific Congress in Lima, for which he was widely praised. He kept a longtime correspondence and working relationship with distinguished scientists of several renowned international institutions, e.g. with the American paleontologist Dr. Edward W. Berry of the Johns Hopkins University, Baltimore; with the British geologist Mr. Errof I. White of the British Museum in London; with Dr. Orestes Cendrero of the Instituto General y Técnico de Santander, Spain, and Dr. Waldo L. Schmitt of the American Museum of Natural History. For all his teaching and scientific achievements he obtained the degree of Doctor Honoris causa from the Universidad Nacional de Loja.

Carrión was very active in Paleontology and Entomology, fields in which he discovered many species and one genus. His main discoveries were:

These findings were thoroughly described by White (1927) and Berry (1929). Such transcendental discoveries were crucial to understanding the last phase of the geological evolution of the Andes by correlating several sedimentary basins in the American Continent.

In Zoology his main findings were: