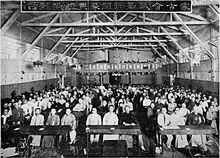 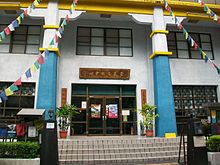 The Mongolian and Tibetan Affairs Commission (Chinese: 蒙藏委員會) is one of two ministry-level commissions of the Executive Yuan in the Republic of China. It will be subsumed into Mainland Affairs Council in 2012.

It was originally created during the Qing dynasty as a subsection of the Lifan Yuan, and oversaw the relationship of the Qing court to its Mongolian and Tibetan dependencies. In early years of the Republic it did much of the same function. However, after the Republic of China relocated to Taiwan, it serves as a governmental body which assists in the relationship between ethnic Mongols and Tibetans in Taiwan and increasing the communication between the Taiwanese and the Mongols as well as the Tibetans. Inaugural addresses were delivered by the Chairman of the Commission.[1]

The Mongolian and Tibetan Affairs Commission manages the Mongolian and Tibetan Cultural Center (蒙藏文化中心). It is located in the Da'an District of Taipei on Qingtian Street nearby the Taipei Mosque and Mandarin Training Center. The center was established in 1993 in the former residence of the Changkya Khutukhtu, Lobsang Pelden Tenpe Dronme, who fled to Taiwan after the Chinese Civil War in 1949. The building incorporates traditional Tibetan architectural features. It also includes an exhibition Area for cultural artifacts, a reading room, lecture Hall, and Prayer Hall for the Changkya Khutukhtu.[2]