Mahidol University (MU) (Thai: มหาวิทยาลัยมหิดล, pronounced: ma-hi-don) is a public research university in Bangkok, Thailand. Established back in 1888 as School of Medical Practitioners, Siriraj Hospital (now Siriraj Medical School) and reorganized in 1943 as University of Medical Sciences (Thai: มหาวิทยาลัยแพทยศาสตร์).[1] The university originally focused on Health Sciences but also expanded to other fields in recent decades. MU hosted the first medical school of Thailand, the Siriraj Medical School, from which the university traced its origin.[2] Today, MU offers a wide range of graduate (most are international programs) and undergraduate programs from natural sciences to liberal arts with remote campuses in Kanchanaburi, Nakhon Sawan, and Amnat Charoen provinces. In terms of fiscal budget and portion of budget spent on research programs, MU receives the highest budget of any public university: estimately $147 millions each year, most of the part has been granted for graduate research programs. Mahidol University has been ranked Thailand's No. 1 university in 2011 by QS Asian University Rankings.[3]

However, the government of General Phibun then separated the Faculty of Medicine (Siriraj Medical School), Departments of Dentistry, Pharmacy, and Veterinary Science from Chulalongkorn University and re-organized them into the University of Medical Sciences (Thai: มหาวิทยาลัยแพทย์ศาสตร์). The university was officially founded on February 7, 1943 and experienced drastic growth since then. Many new schools and departments were establishes during this era. In 1959, the Medical Science Preparatory School (now Faculty of Science) was moved to Payathai area - thus beginning the Payathai campus. During the 1960s the university focused its development on the Payathai campus. In 1965, another medical school was established – the Faculty of Medicine of Ramathibodi Hospital at Payathai. In 1968, the university established another pharmacy and dentistry schools at new campus apart from those received from Chulalongkorn University. On February 21, 1969, King Bhumipol Adulyadej declared the name of the university to be changed to Mahidol University (MU) (Thai: มหาวิทยาลัยมหิดล) in honor of his father Prince Mahidol of Songkla who was also revered as the Father of Modern Thai Medicine. The university bought a large suburban area known as Salaya in 1971 for its future developments. In the following years, the former faculties of Dentistry and Pharmacy were returned to Chulalongkorn University.

King Bhumipol expressed his will that MU should also expand to the Social Science fields, so the Faculty of Social Sciences and Humanities was founded in 1969. The construction of Salaya campus began in 1975 but was soon delayed due the political situation and financial shortage. On July 23, 1983, the Salaya campus was officially opened. All education for freshman-year students was transferred to Salaya. Later academic developments of the university tended to deviate from traditional Health Science area to facilitate academic demands of the country and later developments were centered on the Salaya campus. The first internship college in Thailand was founded in MU in 1986. In 1999, the Rajasuda College devoted solely to disabled persons was established. Adhasit Vejjajiva, father of current Prime Minister of Thailand Abhisit Vejjajiva, had once been the president of MU from 1995 to 1999.[4]

In 2002, MU expanded its campus to Kanchanaburi – to offer its students more learning opportunities with rural communities. The university is currently constructing the Amnaj Chareon Campus to be completed in 2009. Then it become the largest university in Asia.

MU entered the THES - QS World University Rankings in 2006 as 322nd in the world and 3rd in Thailand.[5] In 2010, the university swiftly proceeded to the 228th in the world, 28th in Asian and as Thailand's top-ranked university according to Quacquarelli Symonds 2010 Asian Ranking,[6] although some foreign ranking sources may provide different ranking.

Due to the persistent focus on medical science, Mahidol has full professors appointed by the Thai monarch on academic merits and receives research grants/income from both the government and private sectors more than any other university. It has three huge hospitals, run independently by three different medical schools and is also affiliated with other medicare institutes. In addition, Mahidol has also produced more research papers published in international, peer-reviewed academic journals than all other Thai universities. Most of these papers have been related to medical sciences and public health.

The Mahidol University International College (MUIC); the first international college in Thailand, offers a wide range of international undergraduate and graduate programs. Its newest division is Fine and Applied Arts which houses the Entertainment Media Program (EMP) and the Communication Design Program (CDP). EMP and CDP offer a Bachelor of Arts Degree, and EMP has 3 majors—Film, TV, or Animation.[7]

In 2009, MU has been selected to be a member of totally 9 Thailand's National Research Universities by the Office of Higher Education Commission, Ministry of Education. The government has issued an emergency policy to develop the national research university to reach an international standard to promote Thailand as a central hub of Asian education, research and development. The Office of Higher Education Commission therefore organized the National Research University Initiative and Research Promotion. The cabinet has reached its resolution on May 2009 to approve the project under the budget of approximately $350 million, during the a 3-year period of 2010-2012 fiscal years.More detail

Over 70 centers and laboratories for specialized research fields provide new ground by using interdisciplinary and inter-institutional approach to research and postgraduate training, to meet the present and future needs of government and industry. The Mahidol University Applied and Technological Service Center provides knowledge-based services to both public and private sectors and also promotes and supports research.

2 Faculties of Medicine, 2 Colleges of Medicine, 4 Teaching Hospitals ( Medical Education Centers, Collaborative Project to Increase Production of Rural Doctor ) which produce around 1,000 medical doctors annually and serve as centers for comprehensive specialist medical training and patient care, with a total of around 4,000 beds serving nearly 4.4 million outpatients and 120,000 in-patients per year.

A dental service unit at the Faculty of Dentistry and the Golden Jubilee Medical Center at Salaya serving about 340,000 patients a year.[11] 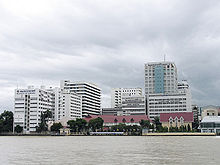 Located in the capital city of Bangkok, MU has several campuses: one suburban campus and two older inner-city campuses in the Bangkok metropolitan area, along with a downtown high-rise office site for the College of Management, and provincial campuses in Kanchanaburi, Nakhon Sawan and Amnaj Charoen provinces.[14]

The former lands of the Rear Palace sectioned for the establishment of Siriraj Hospital is now MU Bangkok Noi campus. The campus extended into the two districts of Bangkok Noi and Bangplad. This building-crowded campus houses the Faculty of Medicine, Siriraj Hospital, Faculty of Nursing, Faculty of Medical Technology, and the Faculty of Physical Therapy and Applied Movement Science. Various personal and recreational facilities including dormitories, cafeterias and sporting facilities complement the academic setting.

This urban campus of 78 acres (32 ha) spreads over three linked compounds in central Bangkok and houses Ramathibodi Hospital and the Hospital for Tropical Diseases, with MU’s traditional focus on medicine and the sciences actively pursued at the Faculties of Medicine, Dentistry, Pharmacy, Public Health, Tropical Medicine, and Science. It also houses the Institute for Innovation and Development of Learning Process, the National Doping Control Center and the Mahidol University Computing Center, along with a full-range of supporting facilities and student accommodation.

A suburban area, Salaya Campus is situated on a site of 520 acres (210 ha). The beautiful semi-rural setting in Nakhon Pathom province, within easy reach of central Bangkok is the most advanced campus of the university. The garden-like decorations makes it an ideal setting for studying or working in tranquility without losing out on the myriad of opportunities available in the city. It houses the majority of academics and research departments at MU, and a full range of supporting facilities including the Central Library, branch libraries, computer labs, the Office of the President, indoor stadiums, completed sports complex, the Student Union, shops and cafeterias, student dormitories and condominiums.

Mahidol University Kanchanaburi in western Thailand has been announced since 2002 with the main objective of expanding higher education in the upcountry region, in order to increase local incomes, create occupational opportunities and improve the quality of life of rural people. Thus far an Administration Building, 2 lecture and Laboratory Buildings, 13 dormitories and associated infrastructures have been constructed on the 2,370-acre (9.6 km2) space, in additional to 2 field stations for research in population studies and tropical medicine. The Faculty of Veterinary Science has opened the first hospital for livestock and wildlife of the country on this campus. Totally of 4 greenhouses have been built for the Faculty of Science, Agriculture Science program. Within the next decade, MU is considering to expand the 6 offered undergraduate programs at present to become 12 programs and complete the new building facilities, including 6 additional dormitories to accommodate an expected enrolled students of 2,400.[18]

MU continues to develop two additional provincial campuses of 672 acres (2.72 km2) in Nakhon Sawan Province, Mahidol University Nakhon Sawan in the northern Thailand, and 169 acres (0.68 km2) in Amnat Charoen Province in the northeast. Nakhon Sawan Campus, with an administration building and a lecture and laboratory building, is currently offer undergraduate program in management. It is expected that a science program will be offered in the future. The Amnat Charoen Campus is undergoing construction, with a multipurpose building expected to be completed in 2009.